ljuin: Yes, actually - Those are supposed to be the traditional metal balls - just motion blurred. Since they'll be moving fairly fast, they'd definately be stretched out quite a bit. The other idea is to give it a better feeling of speed.
We're still going to test it so it looks similar enough to the originals so it doesn't throw people off. One of the main things that will most likely change is the width of the projectile - it should be close to the size of a laser, at the very most. Right now it's much smaller. The other thing that will probably change is the brightness. Right now they're a bit too..glowy. They should look like glinting metal capsules (Sphere + motionbluring). I still have to go back and fix that one.
L

Ijuin said:
On the map idea, how about a hybrid solution: you can "teleport" to hotspots that represent places you've been to before (as in WC4)
Click to expand...

That feature wasn't in WC4.

Yes it was -- the shipboard hotspot map.

Ijuin said:
On the map idea, how about a hybrid solution: you can "teleport" to hotspots that represent places you've been to before (as in WC4), but you should walk around to find new places (including the bar, etc. in a base you've never set foot on before).
Click to expand...

The first thing I do when in a new city and want to go to a museum is I look it up in a directory. So while I would like the option to walk to locations in the game, it makes perfect sense that the main locations on the map for any given base would show up right away. It's like when you go to the mall and they have those boards with a directory that tells you where all the stores, the escalators, food court, and restrooms are. But they don't tell you which department store aisle has pantyhose or which corner to go behind to find the guy to buy a joint from.

It might make sense for confed bases. Not so sure about pirate bases and maps however...
S

Yeah I had to get out the beastwars DVD with the interview to remember the address. I had it bookmarked at one time but alas I didn't make enough backups. Anyway here's the site:

See this page below for the stock footage, have to scroll down past the stuff about footage on DVDs, they have some interesting stuff like spark hits aswell.

really sweet bolts you have there. i thought meson was green, though?
H

Not in Privateer it wasn't. I think you're thinking of WC3 and 4. Since we're going off of the original Privateer here, the bolt will remain white. Also, I'm working on the Kilrathi guns and weapons right now - Mainly the physical models, but I may modify the sprites slightly. I dunno - Anyone have an opinon on that? The idea is that the Kilrathi versions of the weapon sprites would be slightly different in color tone and detail than the human versions of the sprites. Not an idea I'm in love with, just something I've thought of toying with. I dunno if you'd even be able to tell the difference in the heat of battle.
Anyhow, I hope to have those weapons up here tonight - at least one gun and one kilrathi missile.
I

I wouldn't notice differances in the weaponfire if the differances wouldn't be quite obvius...like different colors or complete other shapes.
I will be most likely concerned not to get hit by whatever is comming at me.
Same goes for missiles. As long as I don't see them in some handbook or can take a closer look at them any other way I will most likely didn't notice it to much that they look like the human ones.
If you want to do Kilrathi missiles I think in the CCG their where some images of Kilrathi missiles.
Else you could just change the textures on the missiles ingame.
S

I think the weapon blasts would pretty much stay the same. I don't remember them being different in privateer.
C

hmm, while i like the idea of kilrathi using different-looking weapons, i don't think it will be noticable in battle, unless you change the drastically, like making the neutron purple, the laser dark red etc.

i'd say it's a better idea to vary weapon sounds between humans and kilrathi, just like an m16 sounds differnt than a g36 though they use the same ammo
M

I, myself, say go for it. Every little nuance, be it nearly indiscernable, is what seperates a good game - from a great game. I like to play a game and be suprised by subtleties. I know, that's spelled incorrectly. I'm tired.
Don't get me wrong, the gameplay should be fun, and said subtleties should not be distracting in an in-your-face sort of way, but they should be there. Subtle hue differences between Kilrathi and Terran lasers would make sense, to me... they aren't building the exact same weapon, here. There would, likely, be differences.

To sum it up, Any difference, no matter how tiny, will be noticed. The fact that they're there give people the feel of immersion. Just don't go hog wild with the changes. Lasers are not meant to be hot pink.

By the way, Howard, nice work on the sprites. Better than anything I've ever done.

Yes but it all comes down to how much time you have, you can get carried away and that can slow down production.
M

Personally, I'd rather wait for a great game than not wait for a bad one...
(Case in point, C&C: Generals. Forced out in one year's time, and it was one of the buggiest games out there, when it went gold... still has some bugs that aren't fixed...)
The fact that Howard Day and the guys have gotten so much done in such a short time (artwork-wise) is applaudable.
H

Okay - if we do make slight variaations to the weapon blasts it'll be done entirely in-code - in other words, we can muck about with it all we want at very little time loss. Anyhow, I've been remiss. I said I'd try and get a Kilrathi gun up here almost a week ago. Unfortunately, I got somewhat side-tracked and let it fall by the wayside. So bonus to you folks - I'm gonna give you more than you thought was coming!
First up is the kilrathi gun and a human tractor beam. 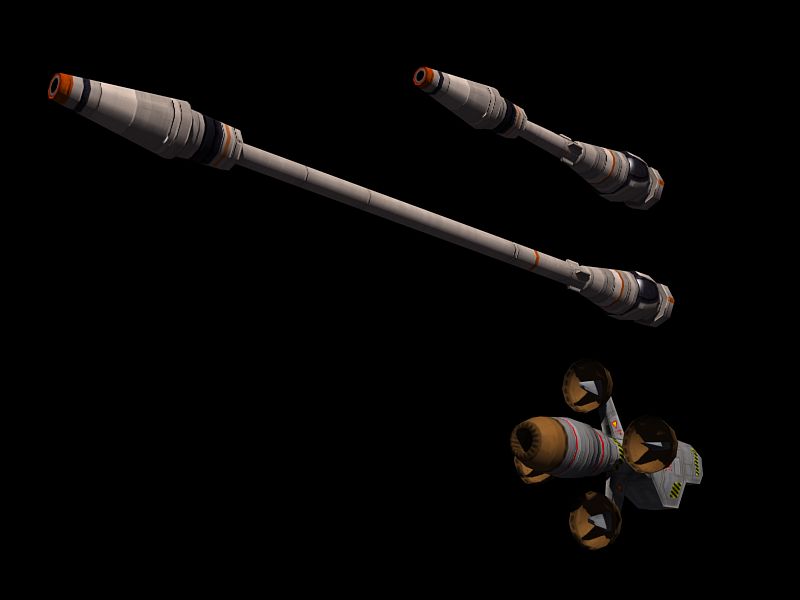 http://www.hedfiles.net/wcpioneer/new2.jpg
Next are the human gun types - they physical models. I can't recall if I've shown these before (I think I did once in #wingnut) but here they are anyway.
From the top - Laser, Photon, Mass Driver, Meson, Neutron, Plasma, and Particle. 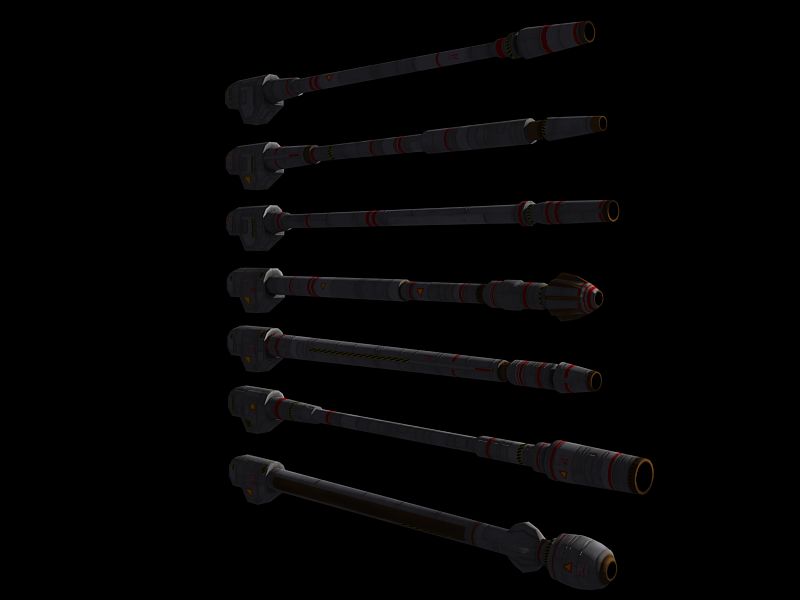 I also wanted to show what some of these ships look like when all placed together. First up is the Landriech Hornet. 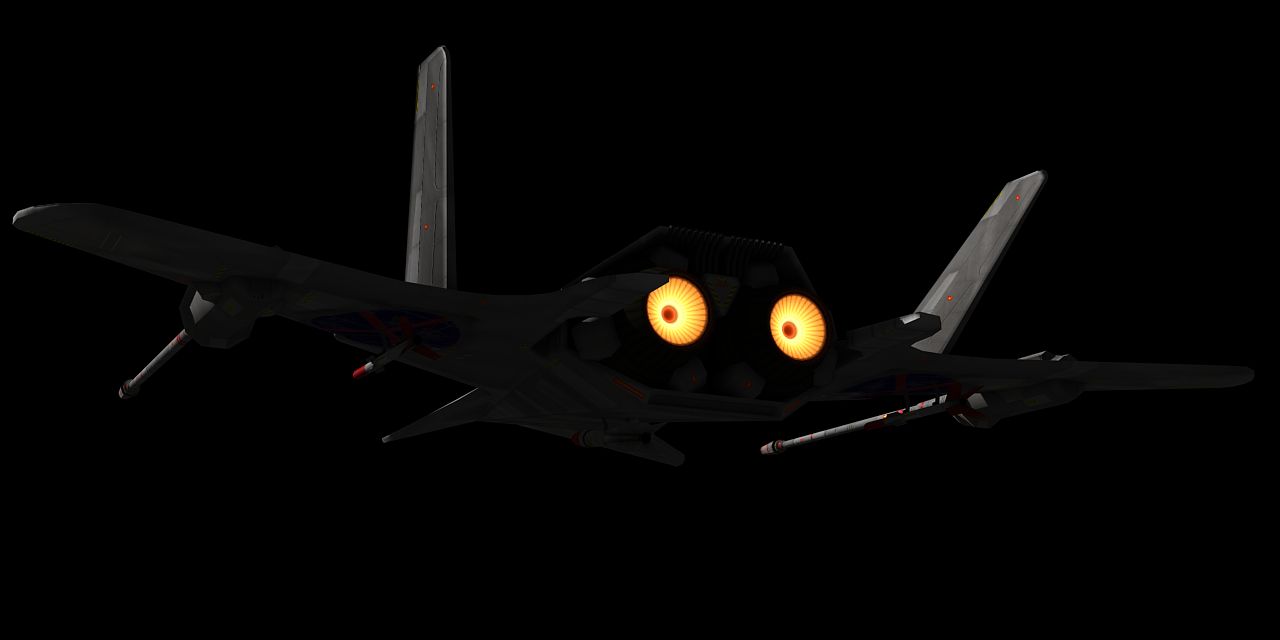 And finally, I wanted to show one of the less-mentioned and fleshed out player ships - the Hydra. Anyhow - this ship is currently sporting two mass drivers and one neutron gun. It's also configured with afterburners, a full missile loadout, no turrets, and level 4 engine upgrades. 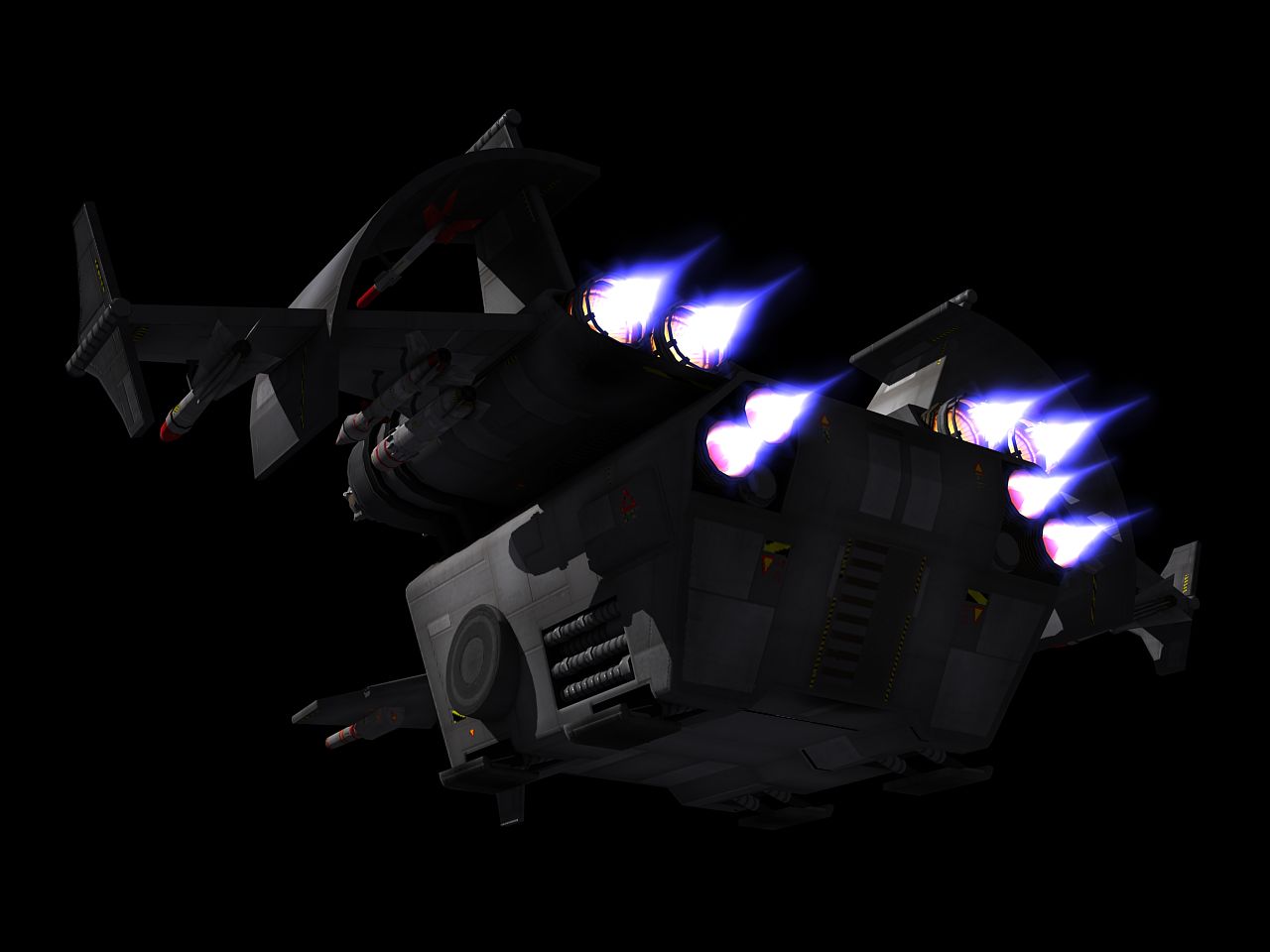 Anyhow, I also have an update for you on the demo front - We are getting closer, but we're not yet in the position to firmly establish a release date. This in part stems from the fact that we've tried to get as much done on the front end of the engine to make content creation as easy as possible when we move to full production and testing. This means that all the code modules need to be put togther and tested - everything from mounting missiles to the creation of entire solar systems needs to be at least basically available - and preferably functional. So the means that I've been doing a lot of sitting on my hands - Joel's been working his butt off to get this to you guys. In the mean time, there's not a lot I can do to help him.
So that's the status update - I'm sure Joel will have a more in-depth explaination posted here soon.
Thanks for your patience!
M

Thanks for the update Howard. Looks great. The Hornet is especially nice. Very simple and purposeful color scheme, as you would expect from a Landriech ship.
S

Manic said:
Personally, I'd rather wait for a great game than not wait for a bad one...
Click to expand...

Well that's not quite what I meant, sometimes "sweating the small stuff" can distract you from what's important. But anyway nevermind.

Nice ships Howard, I don't mean to be rude but the guns look a little uniform/plain compared to what I remember from privateer, still good though.
H

Oh, not rude at all. That's something we've discussed amongst ourselves - there may be a simple solution of making the differences more noticable - such as changing some of the markings and details. Colors and warning stickers too. These will probably get another once-over before they're considered "Final".

Thanks for the comments!