For the past 4 or 5 months I've been working in my spare time on an ascii game based on the classic Privateer (my absolute most favorite game!). I've got most parts of the actual flight engine worked out and am currently working on the bases and interaction with the characters in the game. Anyway, I'd like to post a few screenshots and get some feedback. As the entire game will be made up of ascii characters in 16 different colors (such as Adom, if anybody is familiar with that game), this game will mostly be for the retro-gamers out there.

Here are the screenshots: 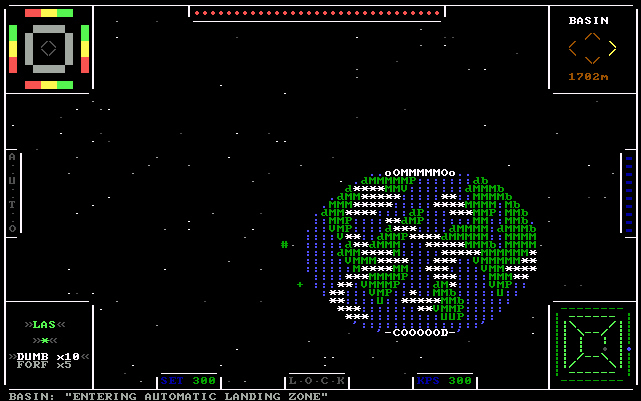 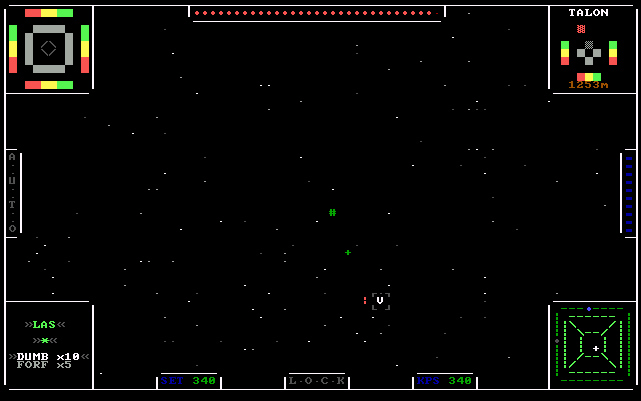 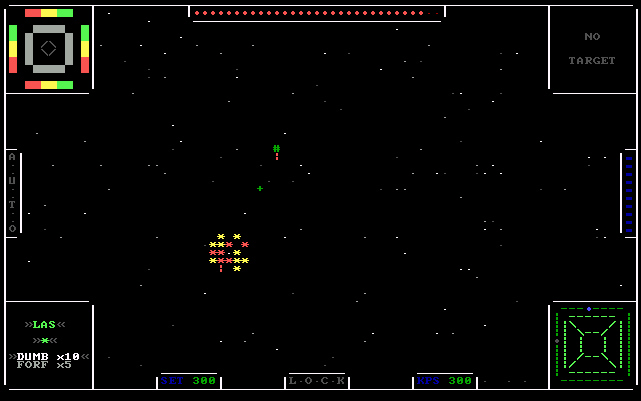 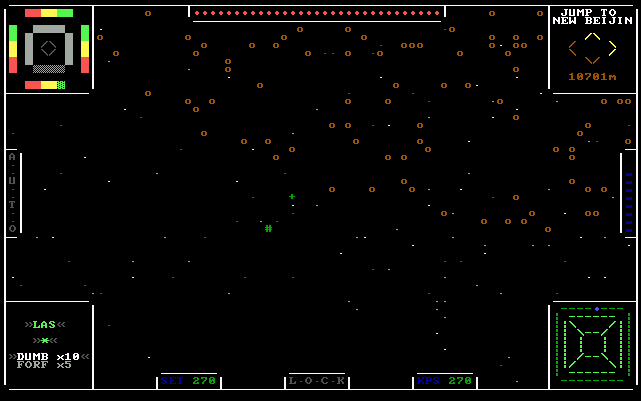 This is fantastic.
F

I don't think any of us expected this.


... seriously, if this is real, this could be really cool.

I wonder if the people who own the wing commander title realise just how big it has become in the years since the last release? That is awesome work! cant wait to try it out!

Very nice! Looking forward to trying it out.
K

What kind of system specs are we talking about here? I've got an old one colour 8086 I wouldn't mind trying this out on.

Thanks for all the positive replies, guys! It's really encouraging to know that there's people out there who are just as interested in an ascii version of Privateer as I am.

Kyran: I'm not sure how fast the game will run on an old 8086. I'm programming the game on my old Pentium 40 mb RAM laptop and I suspect it should run pretty smoothly on a 486. However, the game repaints the entire screen (all 80x50 characters) 40-60 times a second, which will require a bit of processing power. The game WILL run on a 8086, but it will probably just be very slow. Also, I'm not sure you'll be able to run the game with music and sound effects on such an old computer (yes, I'm using the original music and sounds from Privateer)...

st3lt3k: I'm glad you're looking forward to trying it... but it will take quite a while before I have a fully playable demo up and running. The screenshots have been taken from a running version of the flight engine, but I still need to implement stuff like sliding (so that the ship doesn't change direction immediately) and missiles. I'll release a demo version, which will feature only 5 systems to visit and no plot. You'll be able to fly around these systems and carry out non-plot missions and upgrade your ship (or buy a new one), but that's "all". I suspect it will take at least a year before I have this demo version done. Then I'll start working on the full game with all the systems and the plot worked out.

I'll continue to post updates in this thread. And keep the comments and questions coming!

Quite amazing! Looks like ASCII is not dead, after all...

I can only guess how much work went into this so far, but even that's just plain impressive. Keep it up!

(Will it support multiplayer?

Wow! A retro look of what 'could-of-been'. Privateer, in the early 80s? With multiplayer!?

None the less, Chris is doing some impressive work here thats caught many of us in surprise and in amazement.
S

I can't wait to play a demo.
P

Thats a pretty nice ascii style of a game here.

Wish it had more of an original setting but thats just ok, and I'm still looking to see how the gameplay is done.

Just wanted to clear up a few things...

I know Ironduke was kidding, but: no multiplayer. I currently have no idea how to make an internet based multiplayer game, and the game is designed as singleplayer, so I have no plans to make it multiplayer.

braces: When I started working on the game engine, I was undecided whether or not to make a completely original game or a game based on Privateer. I decided on the latter, but the game will still have an original setting. The game takes place in a new sector with new systems and bases (all bases will be unique, and you can walk around them talking to everybody -- some people will have missions for you, some won't). So, just because it takes place in the Privateer universe doesn't mean it will be a rehash of that game.

Again, thanks for all the comments!

its real time? even better

Can you make a gameplay video? This looks great, I'd like to see it in motion.

KrisV said:
Can you make a gameplay video? This looks great, I'd like to see it in motion.
Click to expand...

I'd like to, but I'm not sure how I'd go about making something like that. I suppose I just need a program to capture whatever is on the screen to a movie clip, but what kind of program can do that? Also, the game has to run fullscreen in Windows, otherwise it won't be smooth -- will such a program be able to capture the contents of a DOS program running in fullscreen?

EDIT: Nevermind... I think I found a program to do this. I'll get a clip up as soon as possible...

I've tried a couple of programs and none of them were able to capture video clips of a fullscreen DOS program.

If anybody know of such a program, please let me know.
S

Use a video camera or digital camera with usb or firewire hookups. Video the screen, dump it to the computer, voila!, instant happy viewers.
A

Chris Knudsen said:
I've tried a couple of programs and none of them were able to capture video clips of a fullscreen DOS program.

This is probably because these programs are intended to take videos of games, and all games these days render through DirectX or OpenGL, so the program looks at your video cards colour buffer and records that. But a DOS program dosen't touch that buffer.

It may be worth looking through the options to see if you can enable recording from SVGA or something along those lines.

Alternately, try looking for a program intended to capture windows, I saw one a while back which was for making tutorials for windows programs, but it was commercial only.

Or you could write a program to replay a set sequence of moves. You should have most of the code for doing that already.

Or you could point a video camera at the screen, but quality will suffer.