Yes, it does look similar to the Belleau Wood class Transport from WC Armada.

An Update: Scooby help me out with some models, so it can run on Darkest Dawn. Here a few pics:

The TCS Apocalypse, sistership of the Armageddon and Concordia

And here it is the Concordia with a Gilgamesh and a Clydesdale
Part of the Intro. You arrive at a Fleet Outpost in Enigma Sector...

I don't show you the lines now, because I overworking these and need voice actors. When the Lines are finish, several voices are needed, at least two "Kilrathi"

Now here are the Story:
You are Tobi "Firebolt" Dumbeck, a Ex-Pilot onboard the TCS Trafalgar. After the destruction you serve on the TCS Concordia until the False Armistice. In this time you go back to your homeworld in the Hawking Sector and are far away to help in the Battle of Earth. After the battle you arrive a few weeks later at a Fleet Outpost in Enigma Sector. Your comrade and friend Starsurfer (I haven't a real name for him - perhaps one will jump in this charakter

) are with you since you enter the Terran Academy. Other pilots are Skelly, Hope, Samurai and Hawkeye. You transfered to the TCS Adenauer, the newest light Carrier. The Adenauer has a fighter complement of 60 fighters and bombers, 1200 Crewmembers. The Job of the Battlegroup 75 is to save as many people in Enigma. The BG get assistence from the TCS Concordia in the first missions. Ras Nar'Ghar the Commander of the Hvar'kashik are want a victory by his own and control of Enigma. He rebuild a new Station in K'titrakh Mang and have a little fleet under his command. You have only a few ships to hold Enigma, the others are need in Vega or in the Homefleet to protect Earth.

I split the campaign in 3 parts. Every Part has around 10-12 Missions (I cut a few things) Some ships are coming later in Part 2 and 3. So what I need? Missions are going well. I have several ideas or take it from SF or WW2 movies *g* I need some voice actors :

4 Kilrathi Commanders, another one as an Ace-Pilot
for the Main-Pilots: Firebolt, Starsurfer, Skelly, Hope, Samurai and Hawkeye
Communications Officer of the TCS Adenauer, TCS Apocalypse, TCS Glory, TCS Franken, TCS Concordia and TCS Nixon
3 Captains of Destroyers or Cruisers.
CAG of the TCS Adenauer and TCS Franken
an Actor for another Pilot (not Terran, not Kilrathi)

Stations Communication for the Enigma Fleet Base, Supply Depot
3 Voices (only a few lines) the Terran Präsident and 2 of his Staff.

for the first 10 Missions are need 2 Kilrathi Commander, the Main Pilots, Adenauer Comm, CAG of the Adenauer and the Stations Comms. I used some voices from the prologue and WC2.
I need someone to change the loading screen and the mainhall.

Until that I have some more pics:

a mission in a Nebula...

is not the final model. I just change the turrets and the sidebays and take it from Scoobys Essex-class

this is your start...

I take here a Skybox of a Cloudplanet. So Capships are can be used too

The main-batterys of the Gettysburg. View of the captain

Sir, we completed the first ship your ordered. The heavy destroyer is finish and ready to enter the frontline. Project Omega still needs time.
The destroyer specs:

As your order we send two of them into Enigma Sector to support Battlegroup 75.

Engineer Scooby Doo and Cybot078 work on this project awaiting your command.

That I like to see (if it works) in Saga. Scooby make on his Bearcat wheels and missiledoors:

Would be look nice, because I make only ingame cutscenes so the fighter would really are on the flightdeck (and not 1-2m above it)

Its always sad to lose a Pilot...

Looks good. What's your timeline for completing and releasing the campaign?

Puh not exactly one. Still a few models needs a overwork. The Script was done but FekLeyrTarg says some things I should discuss before with the community, because the timeline is really short between Battle of Earth and Wing Commander 3. I release next week the Story so far and hope the People help me out with some timeline errors.
After that I search the People for voice acting and then I send the first campaign to a few selected People for beta test. After that we can release the first part. I say no exact date. I hope in spring 2013 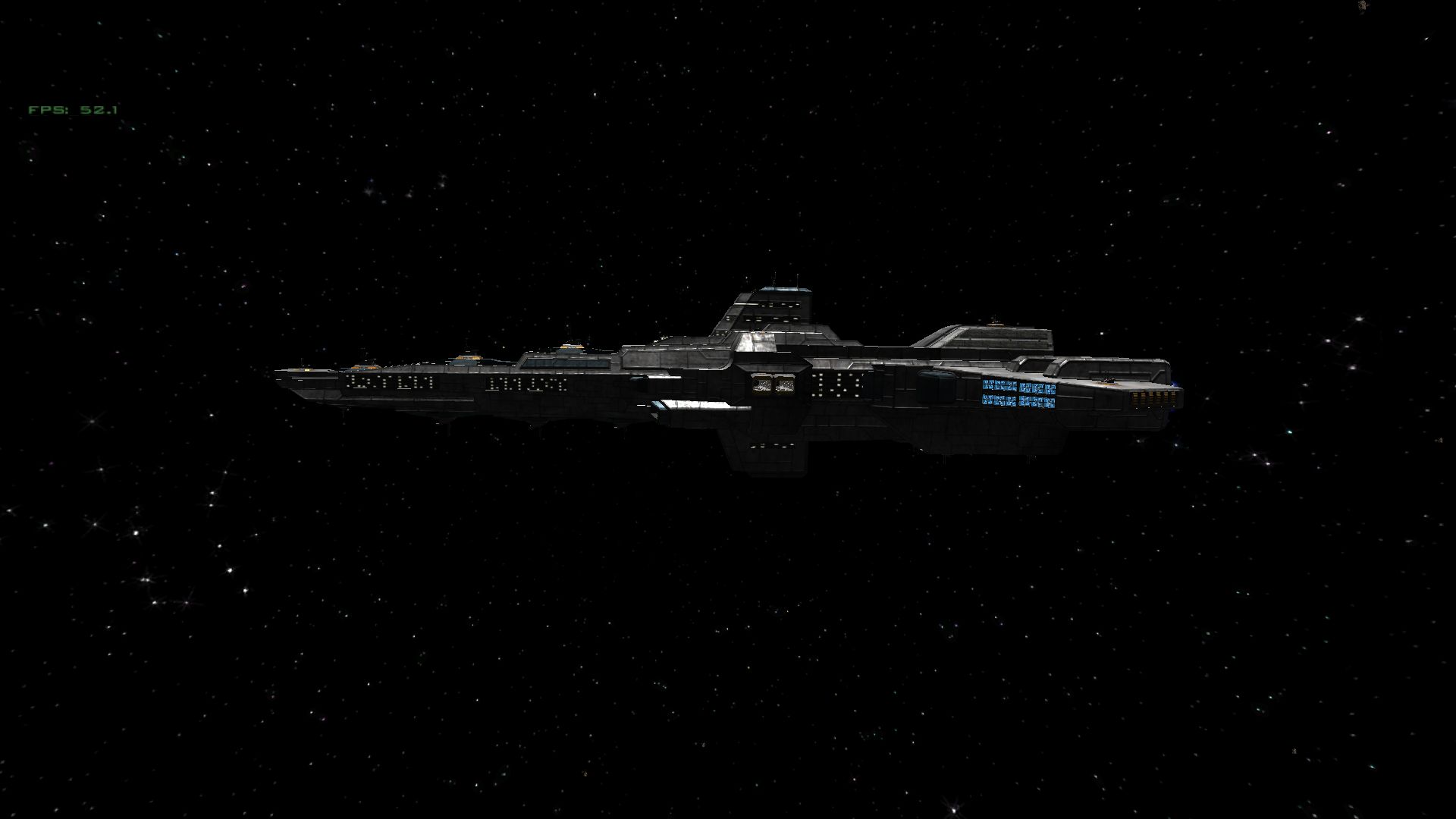 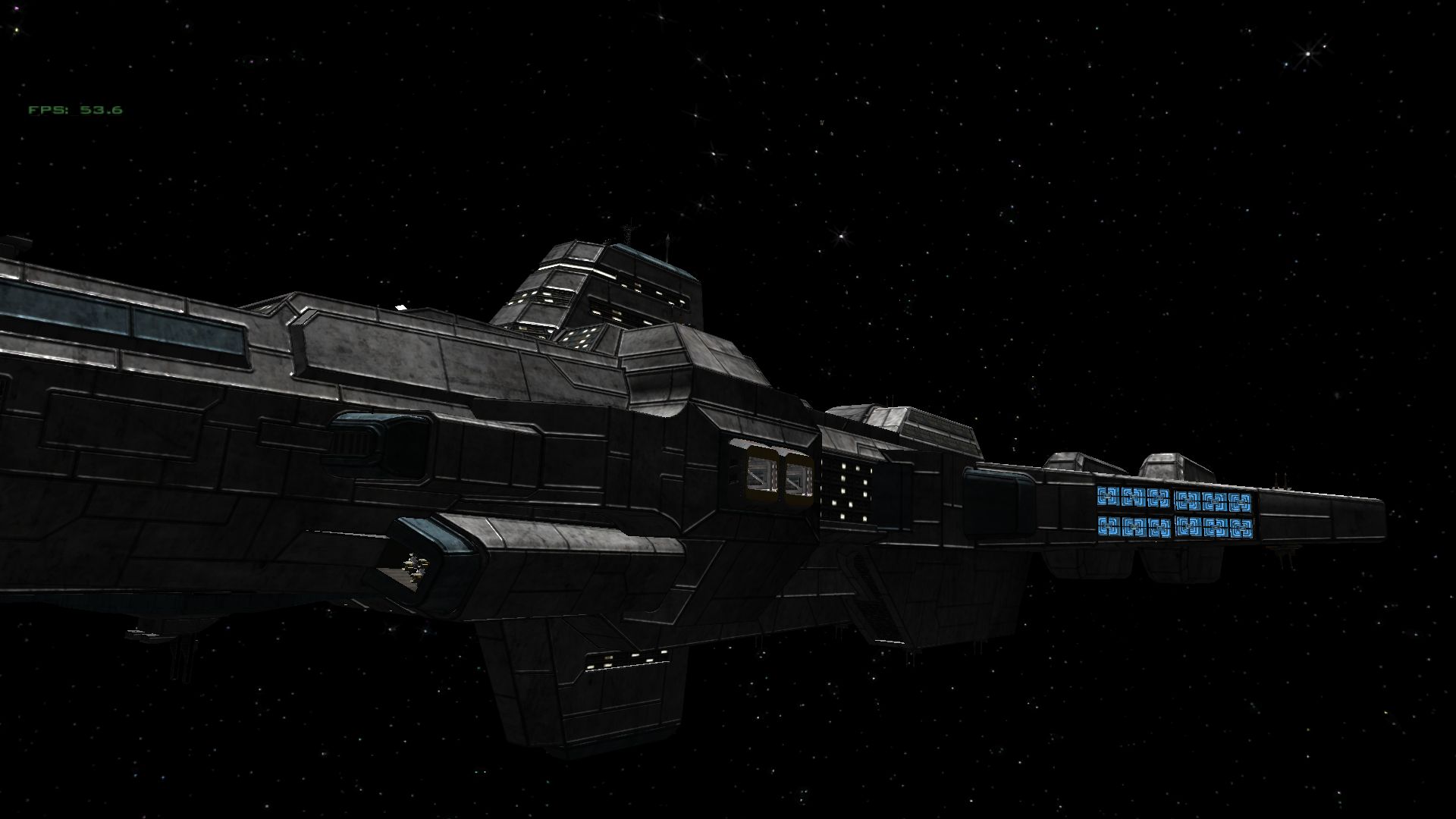 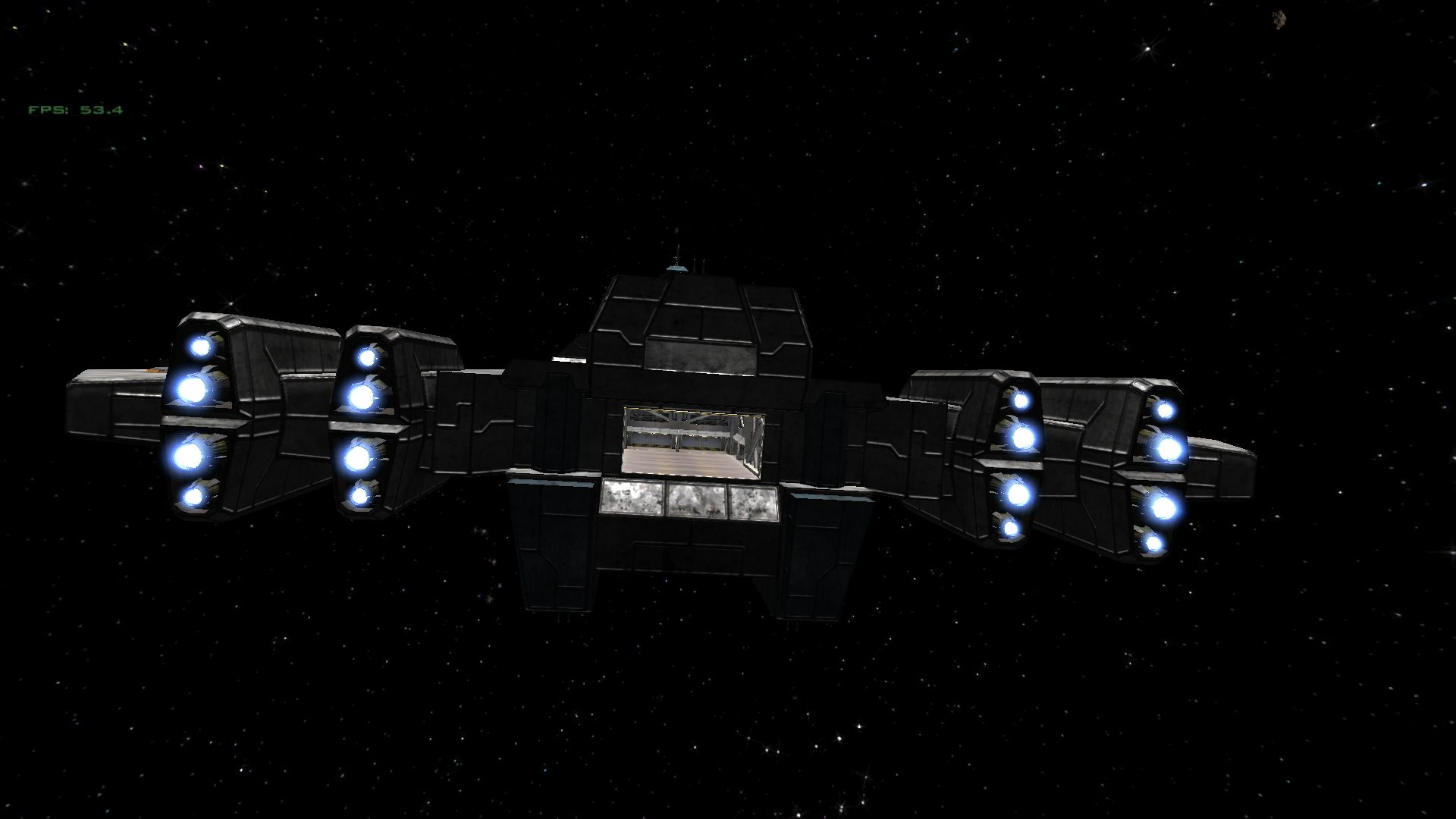 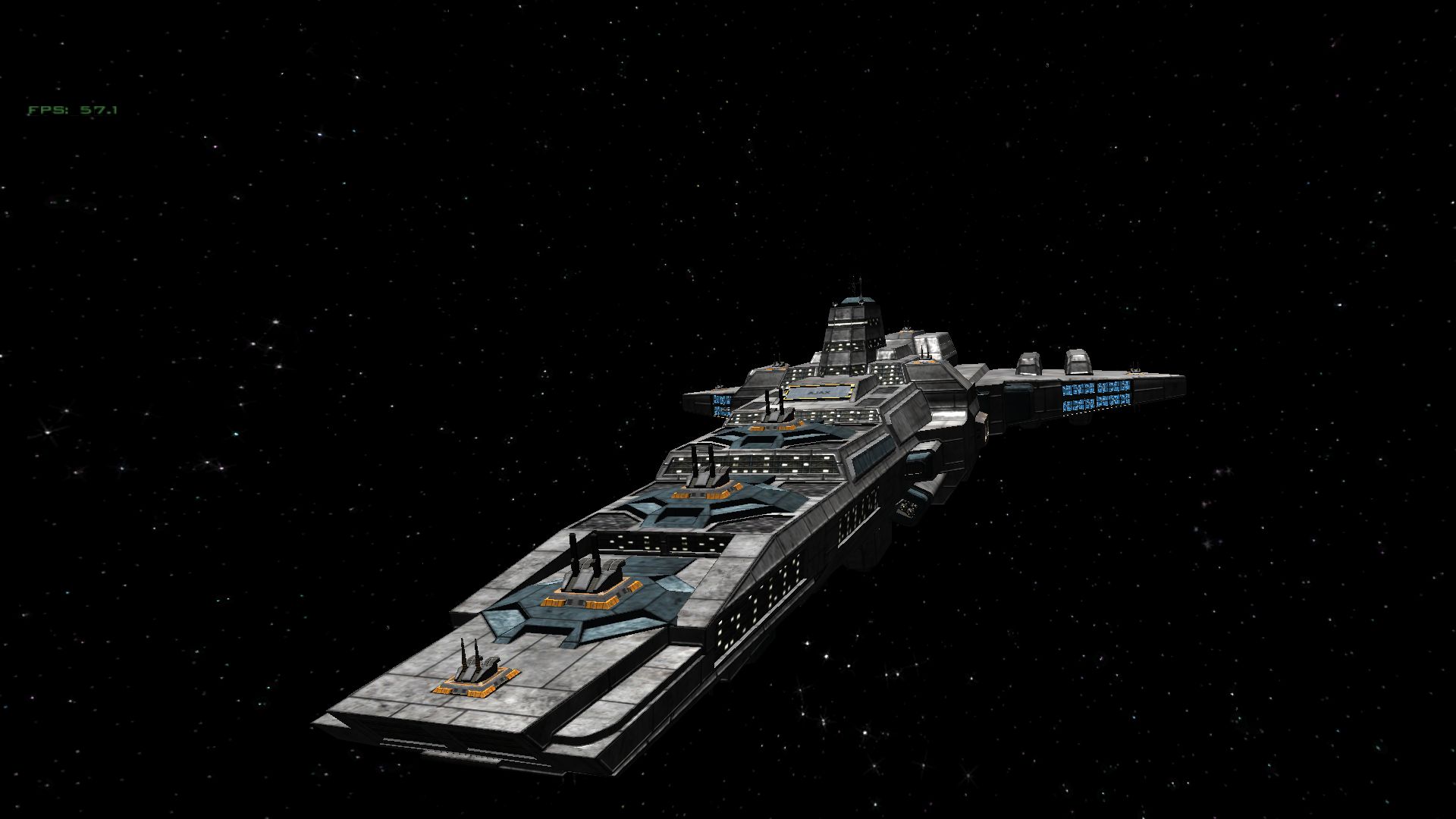 Armament has been change:
Insteat of the four tripple turrets it has now six dual - 3 up/down - 2 Capshipmissilelauncher, 13 Laserturrets (2 will be replace by missilelauncher) and a fighter complement of 28 (before 36)

or 12 Arrows, 12 Hellcats and 4 Thunderbolts. Longbows or Broadswords are not on board. The destruction of enemy capitalships belongs to the heavy AMG gunners.

Patrol with a Northampton and a new skybox 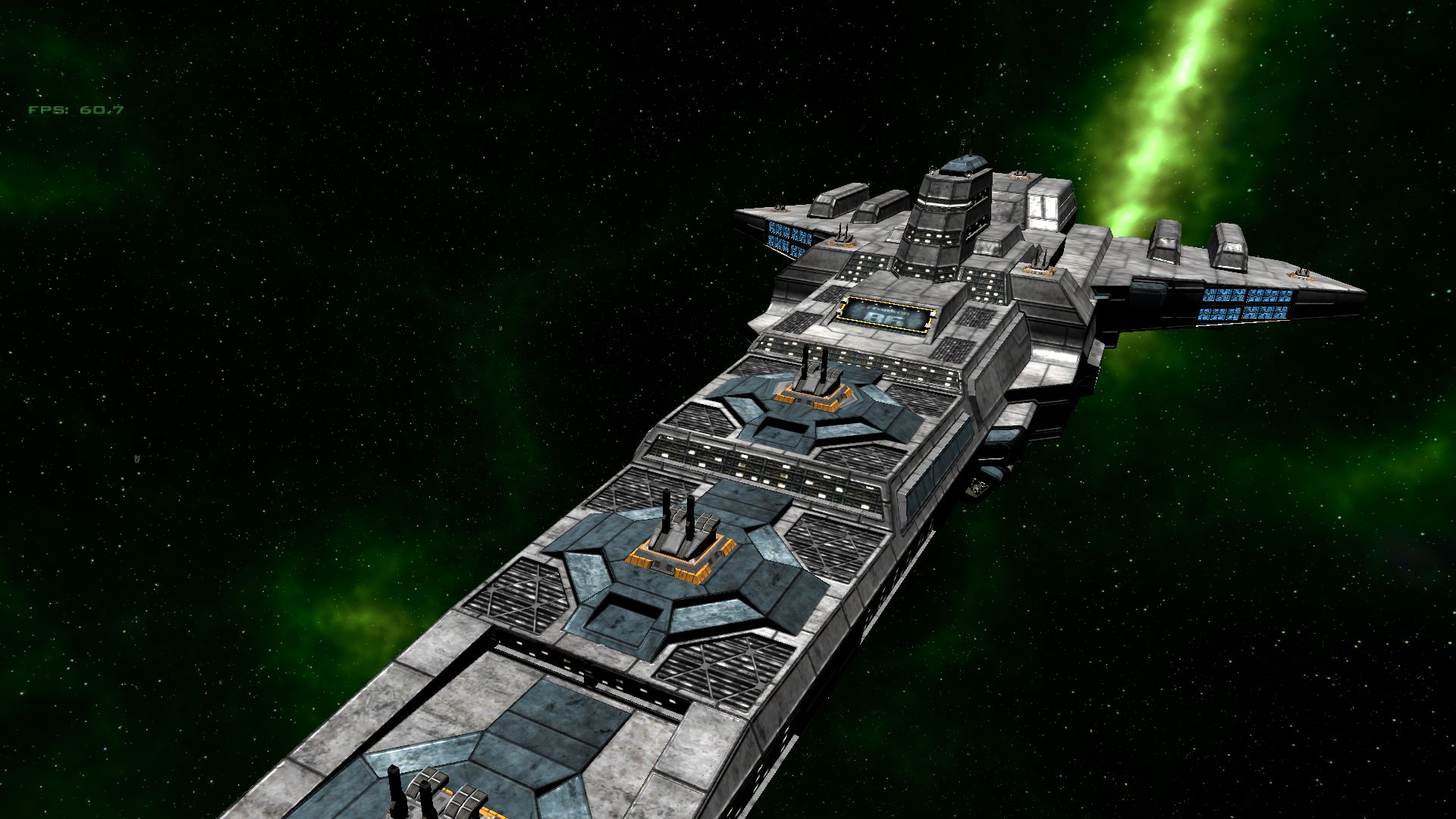 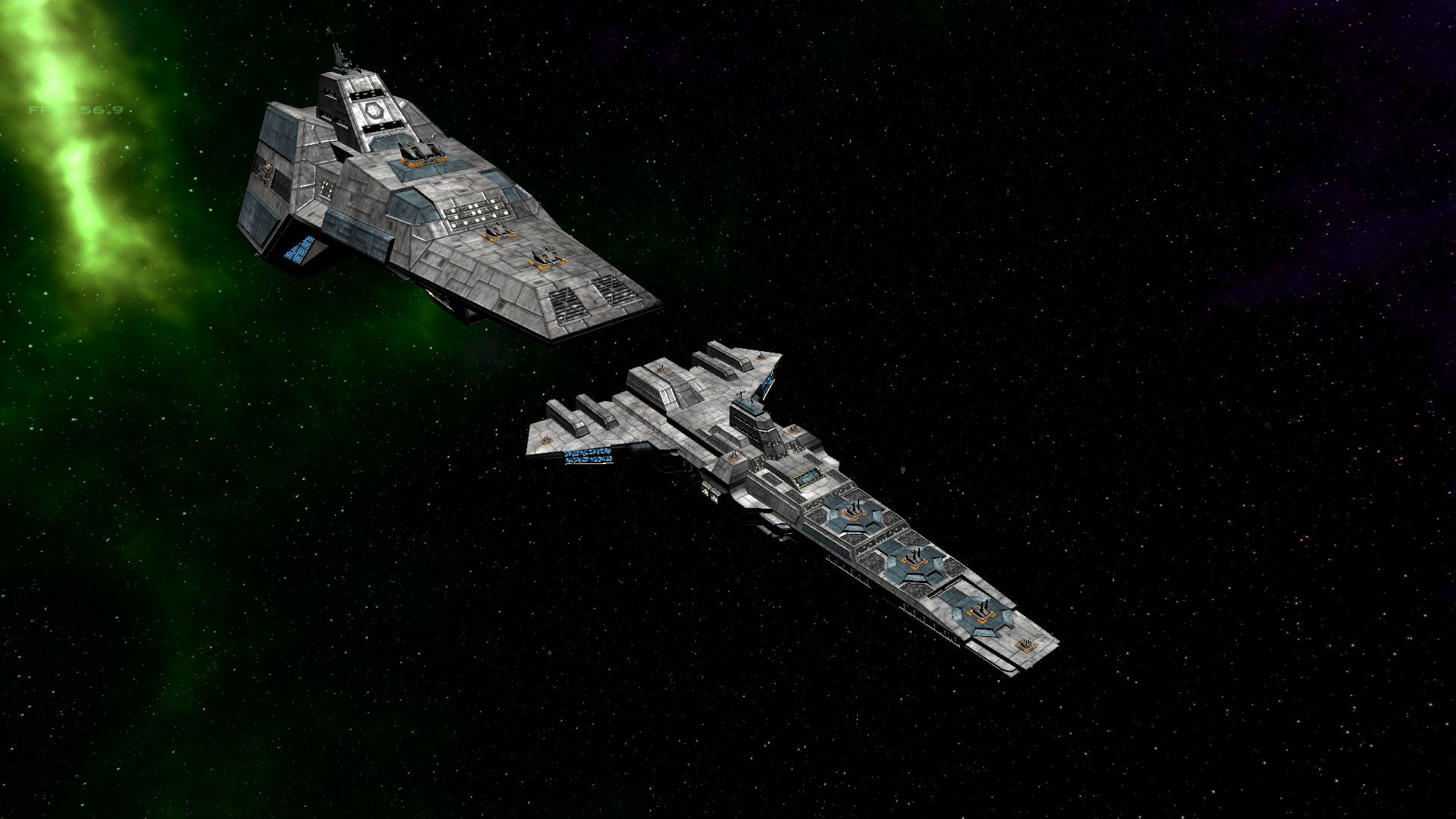 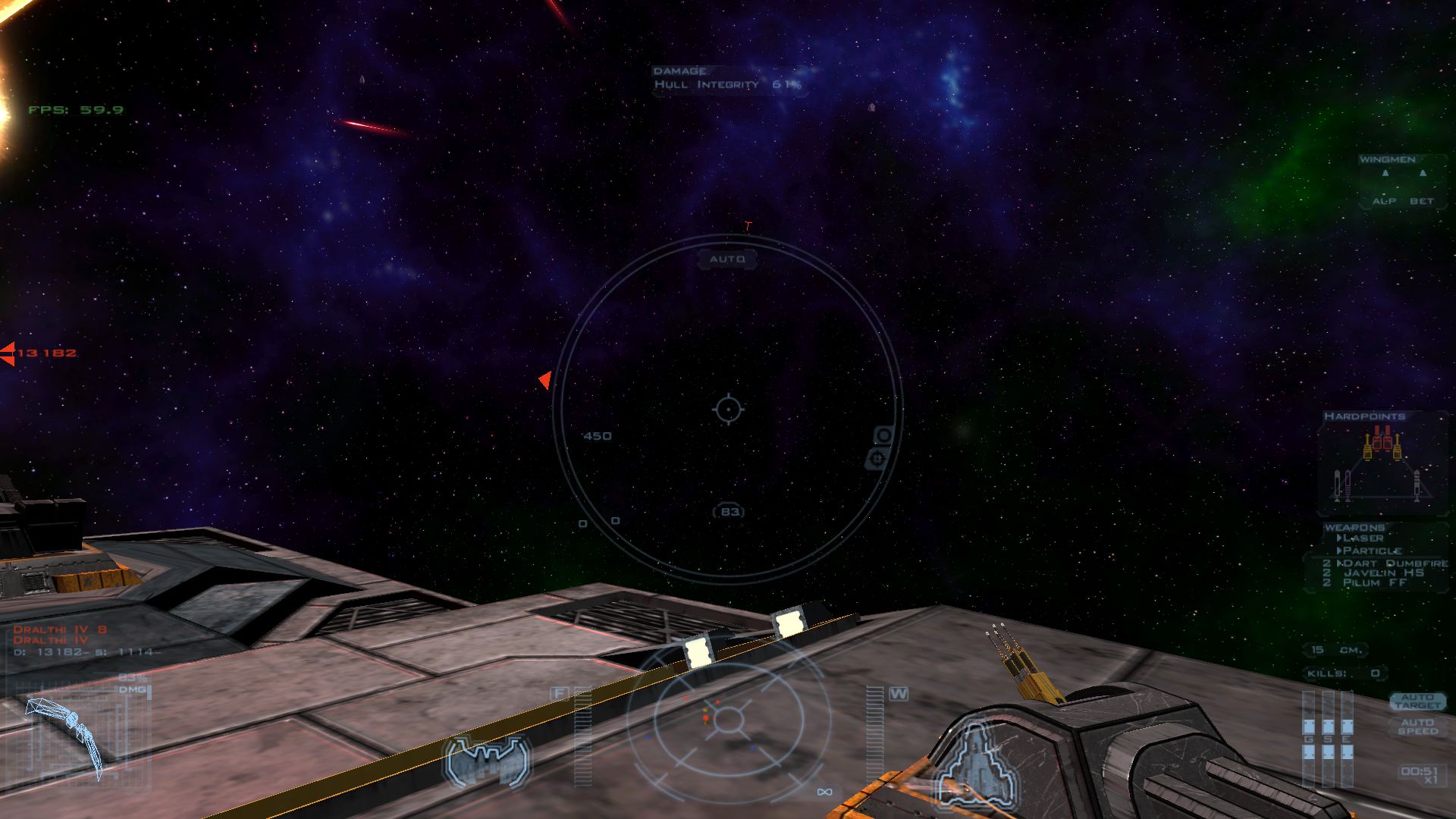 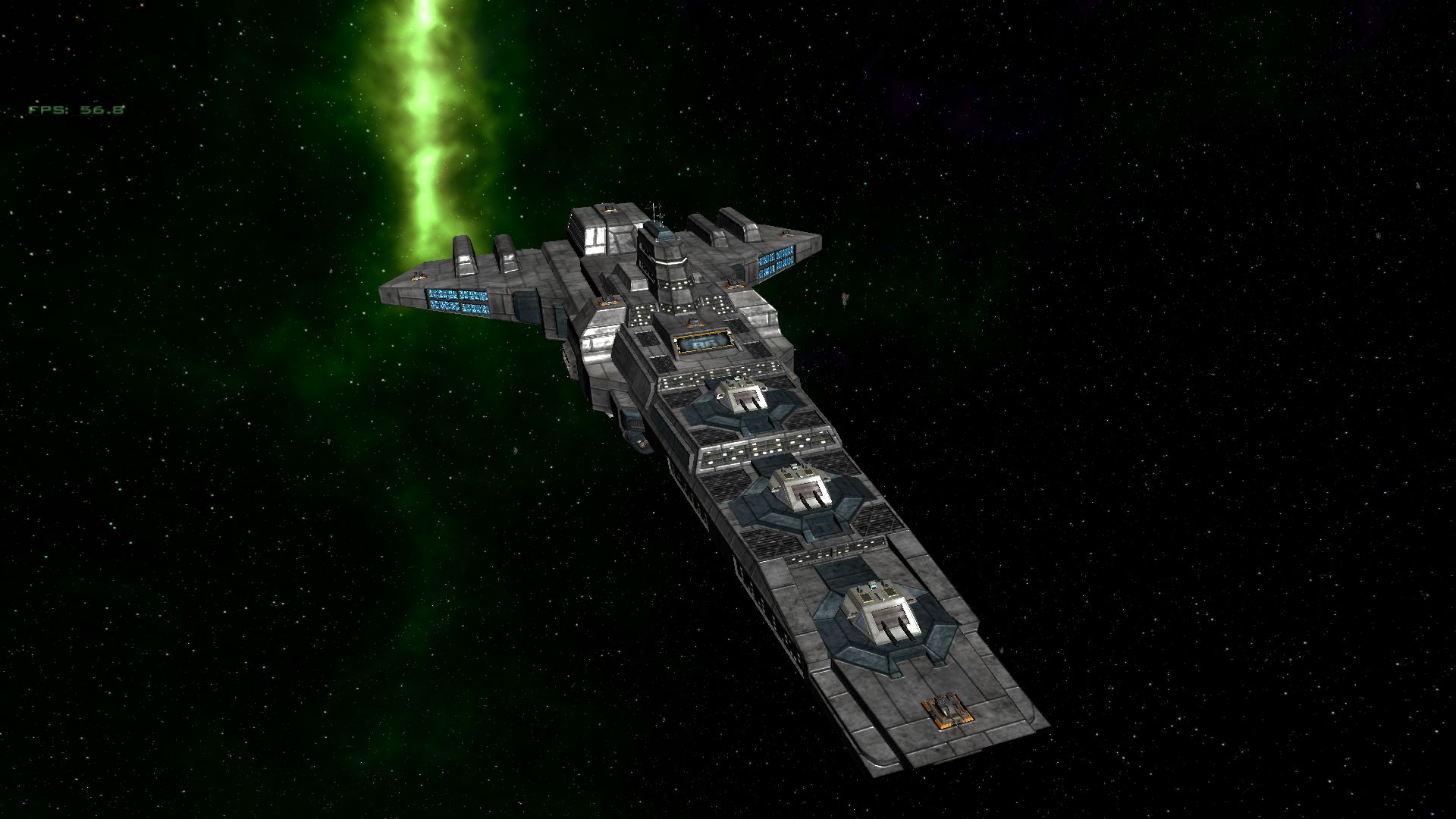 First on pic one the ship has now a AA-turret for Capshipmissiledefence and fighters. Its has 4 barrels and fire like an Phalax CIWS. But its not overpower. The firepower is far less then a Standart Laser turret but has rapidfire. A Dralthi takes a lot of hits before it blow up. Then we found a error in the UV-Map on the turretbases. So I used now Scoobys bigger turrets and mounted the AMG dual barrels on it. With 6 tripple turrets it outmatched entire fleets. Its still has a lot firepower. Close to the Confederation Class. 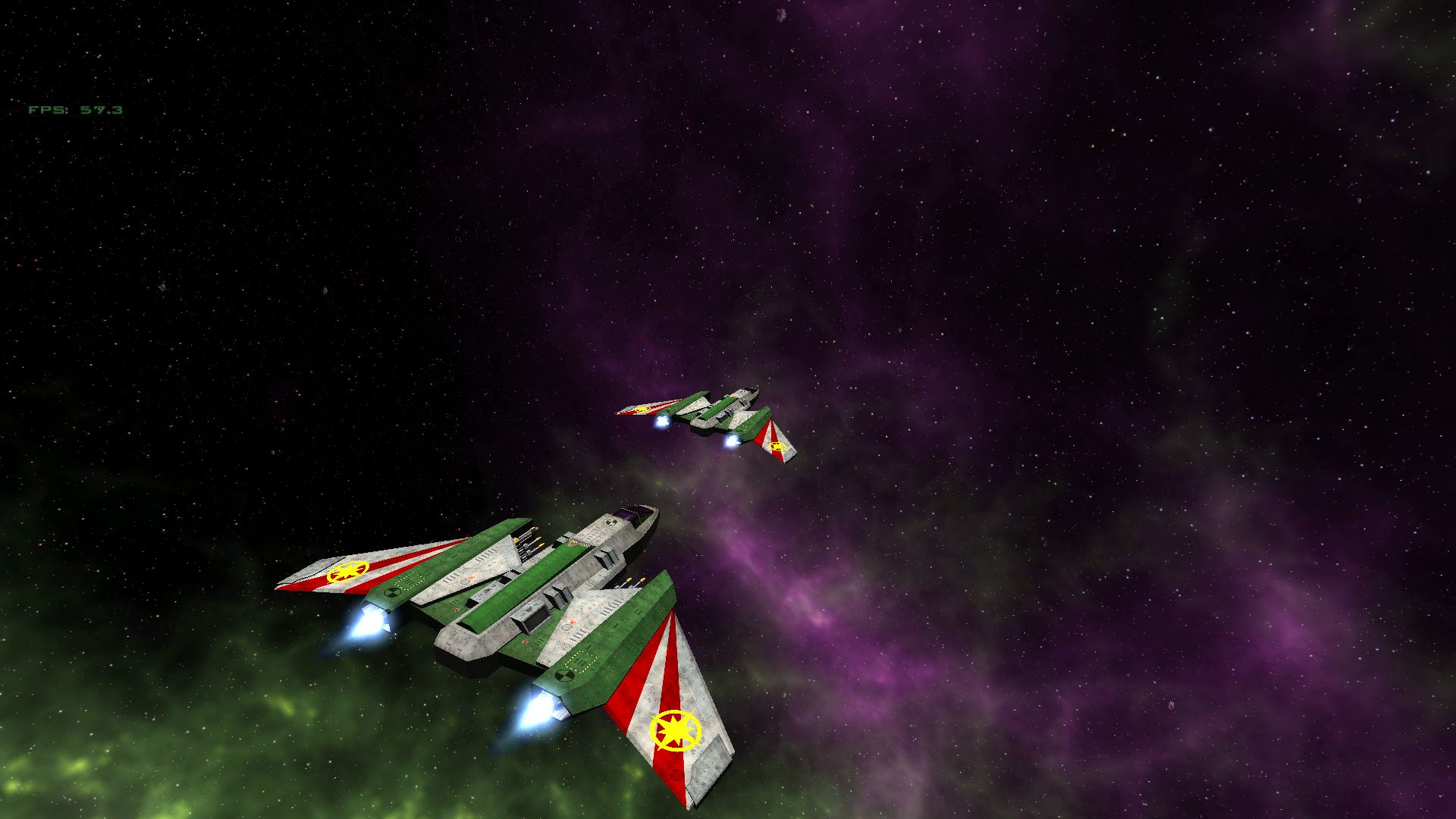 A-15 Gladius on patrol. RedBaron again with the WC2 style textures. Model by Scooby Doo.

Looks like Scooby removed the outer guns from my model but keept the pods.
Still good to see that the model wasn't done for nothing.

Wait, the model had wingtip guns? Heh, and to think i mesh-modded it so it looked closer to the original (Just internally though, not playable).

I understand the need for change though, in-game they'd always make problems with their point of convergence (I think we already had that), and "in-universe" they don't make much sense either (except maybe for heat dissipation).

BTW. the scheme is stolen from inspired by Standoff's Gladius, kudos to whoever did the green one there.

Yes the wingtip guns are also a point that I find quite problematic with the Raptor. If I ever go back to the model I will most likely move their position too. I think Klavs also did that. 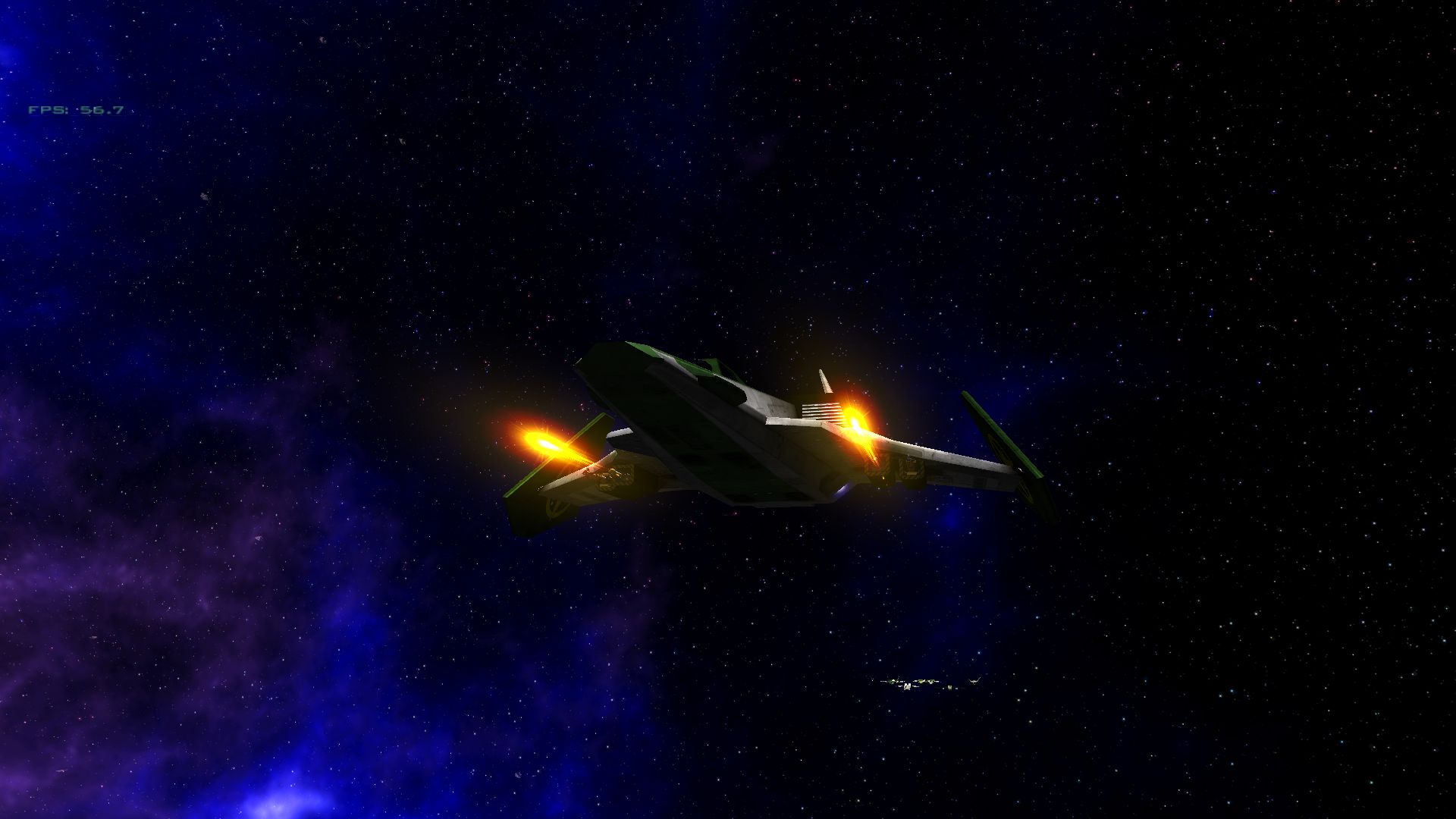 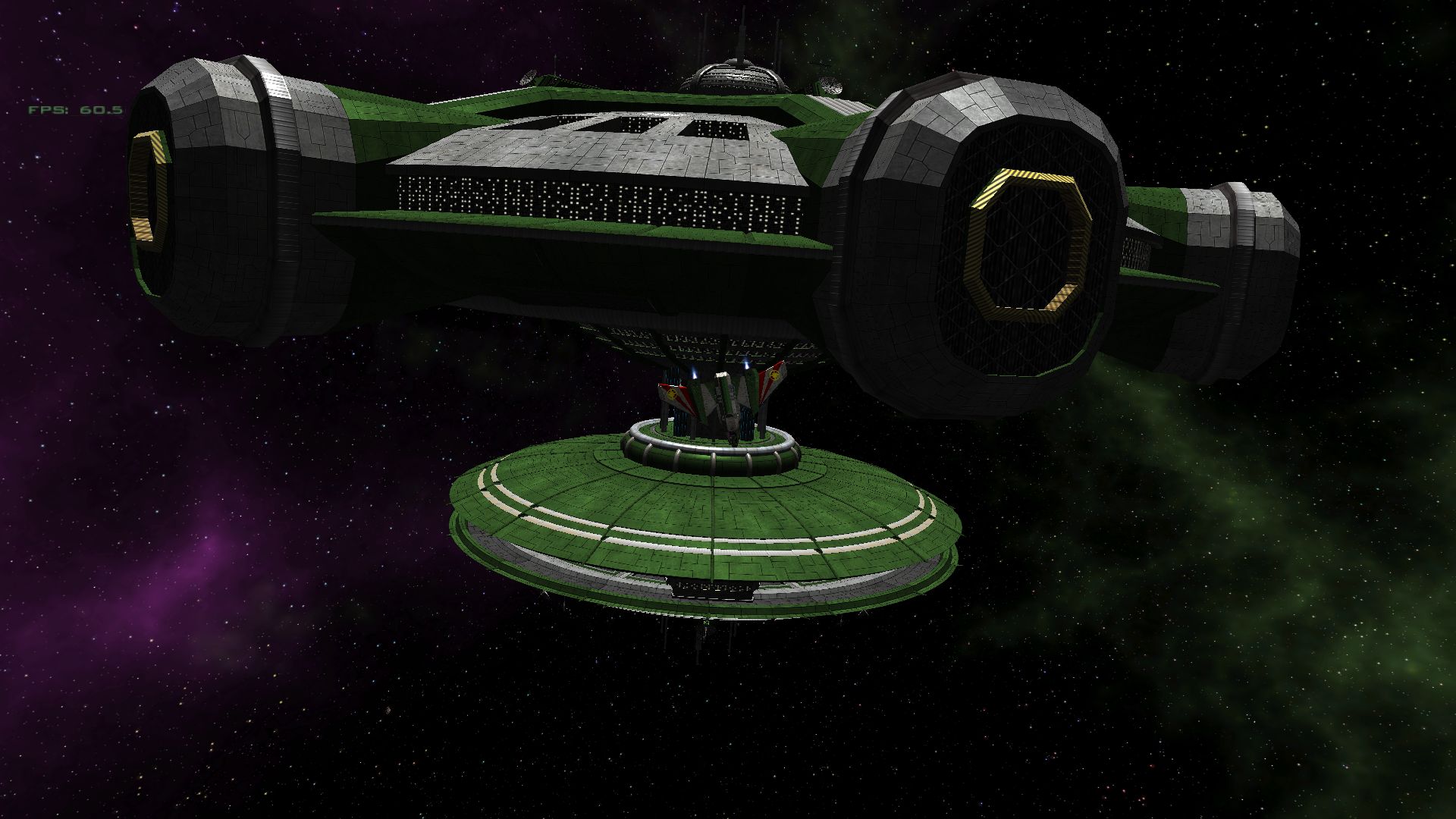 Gladius at Olympus, Enigma Sektor 2669. You see already the other version in Vega. 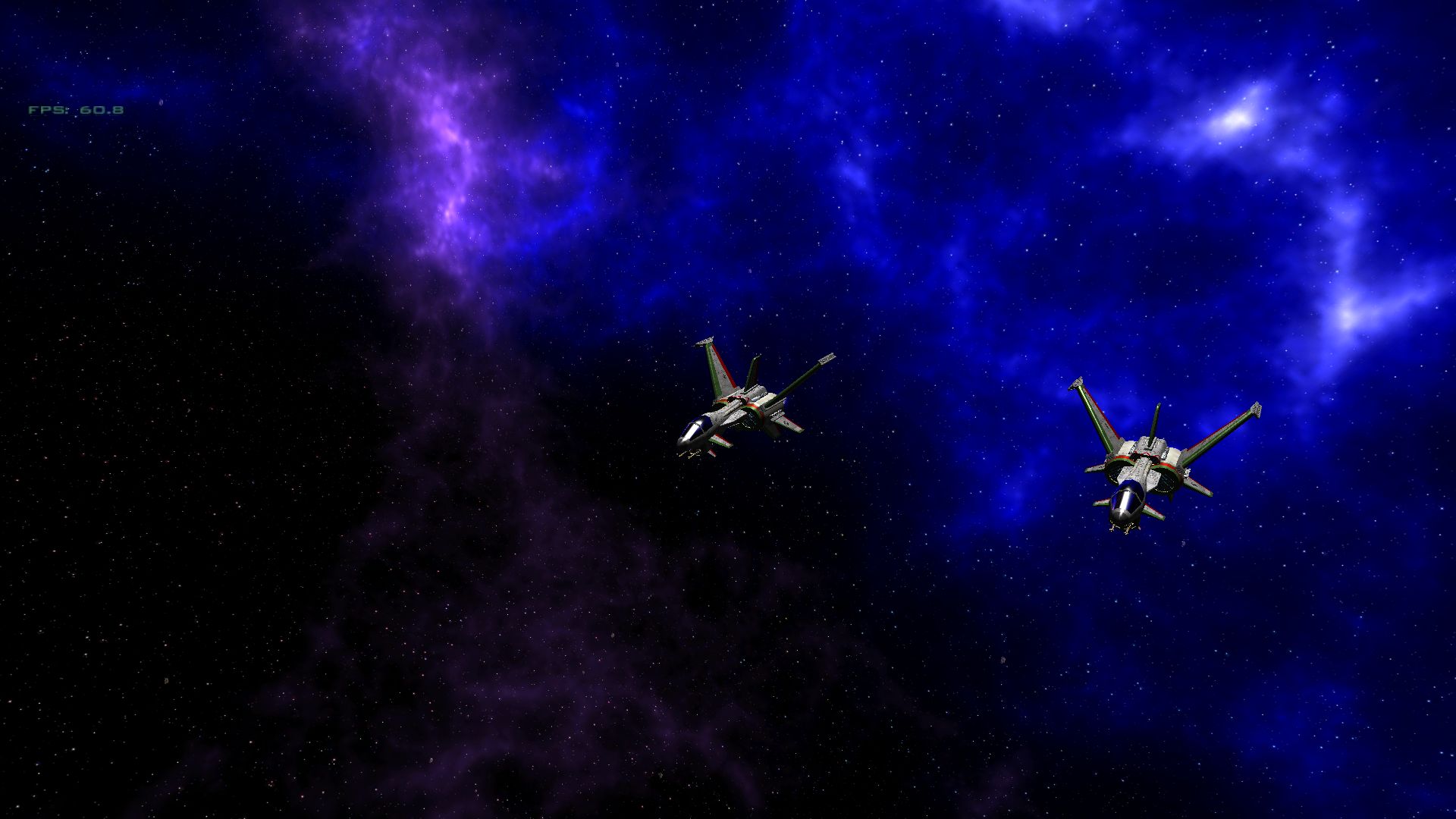 I think the lightmaps are missing, or has everyone on this side of the station gone to bed and switched off their lights?

Nope forgot it to edit it too in Fred. Now its working

gevatter Lars said:
Looks like Scooby removed the outer guns from my model but keept the pods.
Still good to see that the model wasn't done for nothing.
Click to expand...