Currently unable to issue orders. "Remaining Transmissions" is listed as 8 but everyone is in the left hand column and green, like they already issued their orders. Game 5 has been working fine, using Firefox 11.

I can report the same thing; looks like everybody's flagged as having put their orders in.
A

Whoops. Definitely laziness on my part. Until I make the map editor, I have to manually added all the ships. These days, since most fighters have appeared in other games, I just copy/rename them.. but I guess I forgot to re-flag them as 'needs orders' still. The good news is that this isn't a game bug, this was just a game-setup error on my part. I do look forward to moving on to phase 6, and building a level editor... not because that will be fun, but because it will be useful.


So just a reminder to everyone: please try flying into asteroids at varying speeds, and ditto with flak fields. I'll be firing flak more or less evenly at all of you.

Also a reminder of the rules: you really don't want to afterburn into an asteroid field. Damage is very proportional to impact speed. For now, some fly-throughs should be sufficient. We'll have the winners smash themselves into asteroids as a final test.

Hoping Ironduke isn't sick again; at the moment he's holding up both games.
A

I'll send him an email.
I

Sorry, I'm on vacation and hadn't noticed game 7 had already started. Game 5 is another story, though... Might be a bug or something.

Talking about bugs and game 7: I afterburned through asteroids with both of my fighters without any damage or notice in the field report. Also, I'm able to fire at Beta, but I actually shouldn't have LOS. My shots would have to go through two 'roids...
A

There will be a small delay on my orders for "Scratch". Two problems have already cropped up:

1) It thinks my flak cannons are BOTH flak cannons and missiles. (The Kamehk is the only WCTOO vehicle to have both flak guns and standard missiles, so I suspect this is some sort of un-expected interaction between the weapon types. Glad I picked it).
2) My IR missiles seem to think they can develop a lock on Right Claw. Regardless of any sort of range/angle concerns, there are clearly 2 asteroids in the way. Asteroids are supposed to be lock line-of-sight. Clearly I need to fix it.

Everyone else, keep your eye out for other LOS-related failures with respect to weapon targeting/locking. I'll post here once it is debugged. You guys can go ahead with your combat turn orders safely, however, should you believe them to be bug-free.

1CP: This is probably a bad time to bring this up, but did you start both the Rapiers out with damage on purpose? Both Alpha and Gamma are at 15/23 on shields and 19/28 on hull. Just asking.

Alpha's combat orders window is all jacked up (observe): 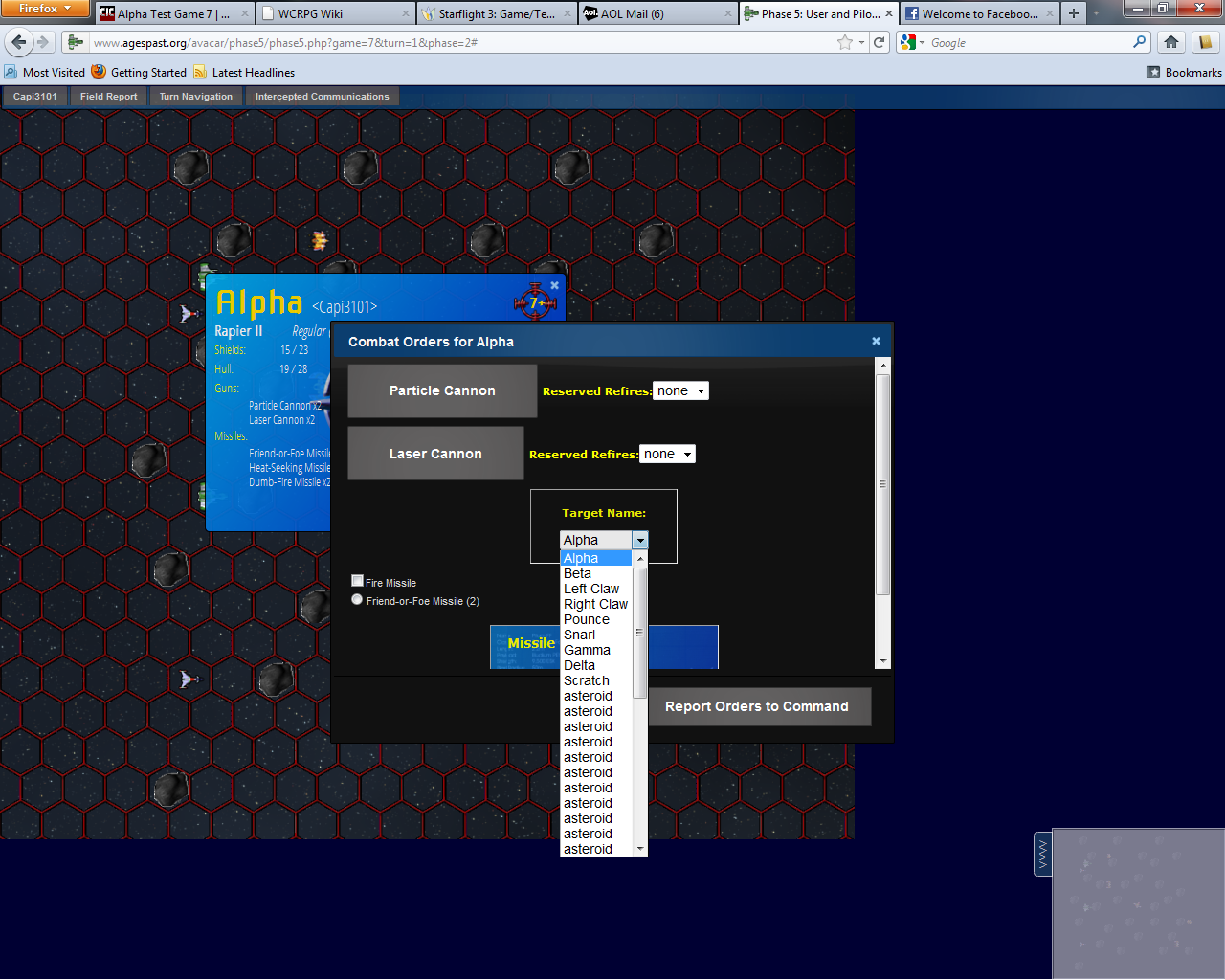 Don't get me wrong, it'd be cool to be able to shoot across the board, but I don't think that's supposed to be an option.

Using Firefox 7.0.1...which may be my problem here, come to think of it. Damn systems policies... Lemme see if it's still this way at home.
C

Gamma has a heatseeker shot on Scratch, despite being on the far side of the asteroid. No shots for Delta

Yeah, my problem was the old version of Firefox that Systems won't let me update. Jerks.

So what about the pre-damaged Rapiers?
A

I've been not doing what I should be doing all morning, and instead debugging these issues.

First, the Rapiers missing health was another issue of me copying them from another game. They've been restored to full health for the CP and onward.

Second, Capi, I assume your target list issues have been cleaned up?

Third: man, the LOS code. So many bugs. I won't even go into all of them, but we had it just outright ignoring the code whenever the target was above or to the left of the enemy. We had typos, we had incorrect logic, we had imaginary, non-existent variables being referenced out of context. It was bad, I'm shocked it hadn't crashed thing yet.

I can say that, for my 1 test case of 'Scratch' thinking it could get an image lock on 'Right Claw', this is now fixed. In theory, everyone else's LOS through asteroids should now be blocked too, but let me know!

Flak wise, I've started by throwing flak out "to be avoided". I'll try firing directly on ships later, to see if that's working as expected, but I'd rather tackle one problem at a time.

I've submitted my orders, waiting only on one of RC's ships.

Avacar said:
Second, Capi, I assume your target list issues have been cleaned up?
Click to expand...


Yep, problem was an old version of Firefox. Systems is supposed to be replacing my computer with a new one in a few weeks, so I should get something more up to date then.
A

Hmm... presumably Chernikov shot that HS at Scratch before I had fixed the LOS issues. (That shouldn't have been targetable). Regardless, this will be interesting to see how the missile and asteroid interact. It's been a few months since I coded collision, so I don't remember if missiles will play nice or not...


and the missile ignores the asteroid. Interesting. When that turn processed it threw a lot of error messages; I've fixed those, and doing so, might have prevented the missile hit. For now I'll not mess with the missile code directly until I confirm that it is independently broken from the now-fixed raw_damage() call that is used by the collision code.
A

hmm. I'm also not pleased that Alpha's missile didn't target Right Claw. A speed 4, left 1 turn should have hit him. Time to look at the FF algorithm again.


Okay, it took a while, but I did track down a few more errors in the FF routine. That thing gives me no end of trouble! looks like FF's simply couldn't hit anything not straight ahead of them. I've now got it supposedly registering Right Claw as a target in a hypothetical rollback. I won't actually do the rollback since we're a fair way into the next turn at this point.

The good news is that the FF routine is fairly global, meaning it should be updating the future FF popups (in the 'target:' field), as well as give people with supposedly incoming FF's a chance at evasives/point defense, meanwhile the FFs should actually track the target.... in theory!


I also finally put into the missile's popup the 'fired by' information. I've needed to track this since we put in the pilot data (I may have mentioned it was now available behind-scenes in a previous post somewhere) but I wanted to build enough confidence before putting it in. Game 5 did build that confidence, so I've added the field. This is a retroactive update, in that it is pulling data from the database live, so for all missiles post-implementation of the tracking of the data, they'll now show their 'fired by:' info. If you reach far enough back into previous test games, though, this information will be blank.
C

I sent that missile off to create an asteroid collision instance, if you would prefer that I don't poke at things that have a broken aspect already let me know.

Been gone all weekend; let's see... oh hell, that's my missile that shot through those 'roids, wasn't it? Damn. Okay. Well, it looks like the issue's been addressed; I'll see if I get an opportunity to shoot another one this coming turn. Right now I need to plan...
A

Chernikov said:
I sent that missile off to create an asteroid collision instance, if you would prefer that I don't poke at things that have a broken aspect already let me know.
Click to expand...

no, no, that was great. Please, do poke at broken things! That one launch alone led to a number of bug fixes. You guys are beta testers, if you didn't try to break things, you wouldn't be doing your job, and I'd assume everything works perfectly. (After coding something for so long, I no longer see things like a 'user' and just ignore odd behaviour instead of abusing it).
I

So, one of my ships smashed into an asteroid and received a stunning 0 damage points.

2CP: Had Beta fly through a flak field; doesn't look like the game attempted to rough him up any.

I think I'll wait before inputting any orders.
A

Ironduke said:
So, one of my ships smashed into an asteroid and received a stunning 0 damage points.

capi3101 said:
2CP: Had Beta fly through a flak field; doesn't look like the game attempted to rough him up any.

I think I'll wait before inputting any orders.
Click to expand...


yeah, so it looks like something happened. Good news is that now that we have valid collision turns 'on record' I can go with my tools and 'replay' them until I get the correct outcome. I'll start this round with the asteroid fields; it looks like it should be easy enough to figure out why they aren't taking damage, since they are clearly registering the "hit". I'll move on to flak fields another time.

Yeah, as for hiding behind rocks, that's a great point, I should probably somehow 'prioritize' ships over 'environmentals' when doing stacks. More to the point, I need to finally get around to the 'rotating' stack idea I had, where a stack flashes through all its icons constantly.