A couple of years ago long, long time ago, I started working on a patch for the Kilrathi Saga version of Wing Commander 1. Slightly less than a long, long time ago, I got sidetracked. (Narrator: It would not be the last time.) A couple of weeks ago I decided to pick the project back up, and now it's ready for an introduction. It hasn't yet been extensively tested, but I guess that's what you guys are for. Think of this as a beta. Thanks to all your support and suggestions over the years, this is all quite playable now!

2018-07-25: I've added a small collection of tools that I developed while I was figuring out the Wing Commander data formats. You can find them attached to this messages as wctools.zip. (2020-10-10: I've moved these into the main release archive.) I'll keep this updated as I release newer versions of wcdx in the future. Included is a tool to extract individual resources from gamedat files (wcres), a tool to convert image resources to PNG files (wcimg), and a tool to play music tracks from the stream files or save them as .wav files (wcjukebox). There is also now a tool for converting WC2 font resources to PNG files (wc2font). These are all command-line tools; for instructions on how to use them, just run them from the command prompt.

Here are the main features:

Caveats:
The surprisingly awesome news:
How to use it:
Where to get it: 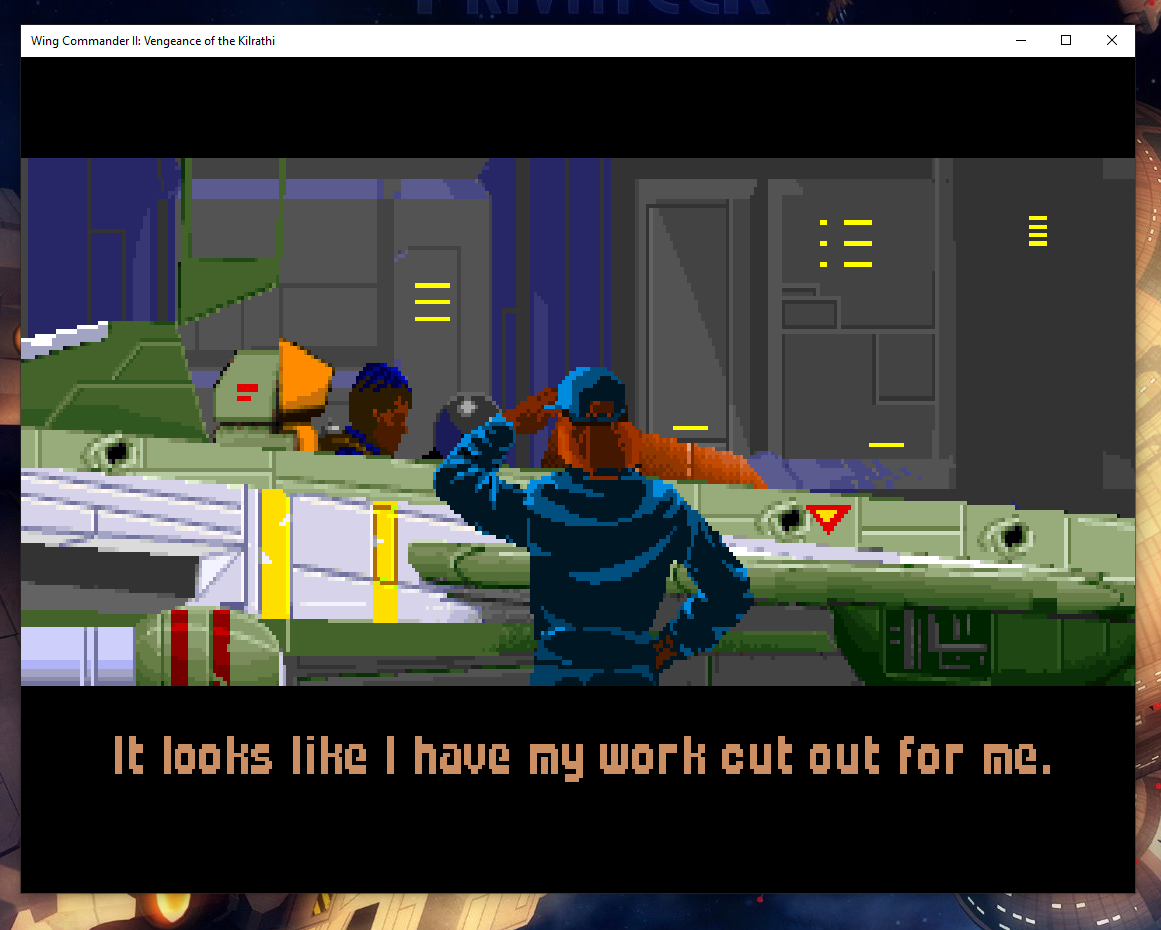 Awesome, can't wait to find the time to try this out!

May I ask, how something like that is accomplished on a technical level?
I guess lots of debugging and assembler is necessary?
S

Yup, that's pretty much it. It also helps (in the same way that having a job "helps" pay the rent) to have a good static analysis tool; I used IDA Pro (freeware version here) to track down all the spots where the game calls into DirectDraw, then replaced those with calls into my own dll (wcdx.dll). Other enhancements were possible by tweaking the code here and there, sometimes just changing a constant to add or remove a flag, sometimes replacing short snippets with my own code. The hard part lies in figuring out what the original programmers intended when they wrote the code, and for that IDA is indispensable.
S

Well, this is embarrassing; I just discovered that the music bug isn't actually fixed. I'll have to look into that one some more.
S

Turns out I was right the first time; the music patch does work. However, it only works if the game is looking at the right stream. If you have the CD inserted, the game will find the stream there, ignoring my patched version. I've now updated the game patch to look for streams locally before looking for the CD.

Very cool project! My KS CDs have been gathering dust for years because of DOSBox and GOG. I might have to break them out when I get back and try this out.

Keep up the good work!

I'll have to give this a serious look.

Haven't had much time tor flying lately but this changes my priorities for my game time. I have a very stable install running on a Vista x86 OS (yeah, yeah, people laugh about and even bash Vista but I have more stability from my older titles in Vista, as opposed to XP and 7 x64.). I've always enjoyed it despite some of the gripes it receives... except for that music bug. It does get on the nerves some hearing the victory bars over and again. Fixing that alone is a Godsend to me.

Always happy to see the coders in this community work their asses off improving and modding the games as my talents exist in a different disciplines.

Can this also be applied with the free KS-WC1 that was on some demo disk and has been hosted here?
S

I haven't tried it, but probably; the patch actually applies to the Wing1.exe that shipped with the Secret Missions pack, so as long as that works, you should be fine.
S

I've just fixed a bug that could cause a crash on entering autopilot. Updated release attached to original message.
S

This is awesome! Thanks for all of your hard work!
S

I really appreciate your work and I am so hopeful to see you extend it to the rest of the games. Even if it is lots of work and you are only one person I trust your passion for the Kilrathi Saga will eventually bring you there.

Keep it up and thanks again!

PS One question: how does your patch compare to the one found here: https://www.wcnews.com/wcpedia/DirectDraw_Hack - could you also in the future provide a bilinear filter (or better) like the DirectDraw_Hack does?
Last edited by a moderator: May 24, 2018
S

Thanks! Let me know how your play-through goes; I've managed to complete a full play-through without a hitch, but I'd like some feedback from others to help decide what to focus on next.
S

Salk: ddhack (as I understand it; I never actually tried it out) is a more general patch for any game that uses DirectDraw. Mine is targeted specifically at this game. Where ddhack is limited to replacing graphics functions only, my approach allows me to solve other kinds of problems (in addition to the graphical issues), but at the cost of having to modify each game individually. In theory, this becomes easier over time as I learn more about the overall design of the games, but there's still a ton of work reimplementing the same features for each game. I believe that the benefits of true compatibility with modern Windows are compelling enough to give it a try, and a number of smaller drive-by fixes also become possible. (For example, the original version of the game would often crash on exit due to a double-free of a semaphore. This wasn't necessarily noticeable, but I fixed it anyway.)

As it happens, my approach to the graphical side is more-or-less the same as what ddhack did: Apply the color palette in software, blit and scale the frame in hardware. The difference is that my patch doesn't pretend to be DirectDraw; instead, the game actually knows about my DLL and its interface.

Filtering is certainly a strong possibility for the future. Since it's purely a graphical effect, it also wouldn't take any extra effort to support on the other games once they know how to talk to the DLL.
S

I've added a new release that moves the SAVEGAME.WLD file into an appropriate user-specific directory. On Windows Vista and higher, this should be the user-specific saved games directory (usually "Saved Games" under your Windows user directory); on XP, this should be the local application data directory. This change means that the game's application directory can remain immutable, which should work better for installs into the system's Program Files directory.

If anyone out there has been trying this out, please let me know by posting to this thread. It will help me to gauge the interest in this project and verify the stability of the current release. At this point, I think I have everything in place that I'd like for 1.0 (before moving on to the next title), but I'd like to be sure it's working as well as I think it is.
S

Thank you a lot, Stinger.

Unfortunately at this time I am not planning a WC1 gaming session but I'll be sure to report anything that is worth your attention once I come around to it.
S

This is awesome and congratulations on the fine work. No big deal, but I just thought I'd throw this at you...planets in the backgrounds for WC1?

Can you explain what the problem was with the music bug? It drove me nuts and made me give up on at least one KS playthrough
S

MartySheen said:
This is awesome and congratulations on the fine work. No big deal, but I just thought I'd throw this at you...planets in the backgrounds for WC1?
Click to expand...