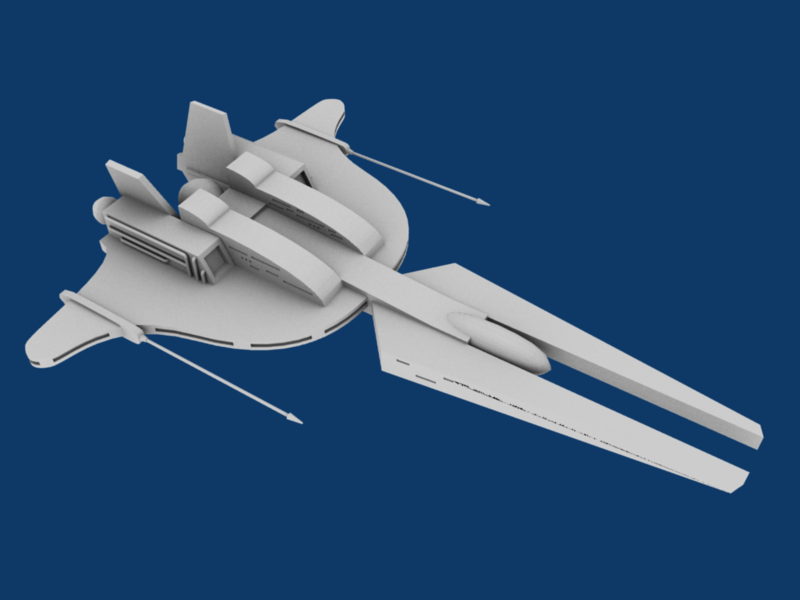 I'm making a new High-detail Ralari model for Woolie Wool's Wing Commander: Advance Guard mod for Saga. I'd like to try and improve my 3D modelling skills, so I thought I'd post it here for feedback.

The model itself is largely based on the game sprites (like the Rapier II in Hostile Frontier), but it also draws inspiration from the Claw Marks drawings and other fan art as well.
F

It looks very detailed and very good for the beginning.

When I see the Ralari I think it was designed to be a fighter and later enlarged to be a destroyer. Same thing for the Venture.

RC1207 said:
When I see the Ralari I think it was designed to be a fighter and later enlarged to be a destroyer. Same thing for the Venture.
Click to expand...


I always thought that too - I guess arguably a corvette comes between a true capship and a fighter (and a Sorthak between a fighter & a corvette!). But I missed seeing corvette type ships in the wc3/4 era. Was there ever plans to have them that got scrapped I wonder? Since we had kilrathi corvettes in wc3...

In regards to the model, I would take the opportunity to bulk up the design a little - it can be done without changing the overall shape of the craft. Would just make it a bit more 'capshippy'. Just adding windows probably won't cut it. I would also be tempted to remove those huge long cannons, or make them more structural (rather than just long cylinders). I know they are in the blueprints, but I reckon its those that make it seem like an upscaled fighter. Adding a little more bulk to the wing sections wouldn't hurt either. Just my 2 cents.

It is possible that the Ralari model was originally a corvette - we know from the WC1 data files that at some point, somebody did plan for a corvette in WC1. We even know it was to be called the Spikeri, but we do not know what it was supposed to look like. Curiously enough, Super Wing Commander actually did provide a model for the Spikeri... but it still didn't show up in the game itself.

Given how things go in development, it's quite conceivable that the Spikeri had to be cut for space considerations (we know this is what happened to at least some of the new ships we encounter in SM1/2 - they are models that were created for the original game, and dropped for some reason or another), and that somebody simply liked its model so much, that they ended up using it for the Ralari, dropping the original Ralari model instead. This, however, would be pure speculation - it's just as likely (probably much more likely) that the Ralari model was always intended for a destroyer, and simply has big crazy guns.

Interesting theories about the Ralari. I never would have thought it was originally intended to be a fighter, though. It looks more like a corvette or a destroyer to me. 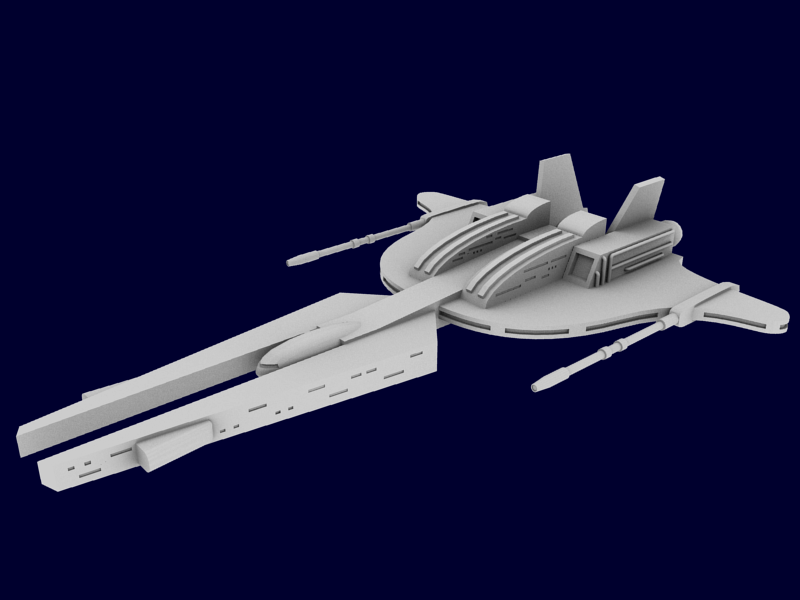 The model currently has 5772 polygons. I'm planning on adding Dralthi-like details to the wings eventually.

This, however, would be pure speculation - it's just as likely (probably much more likely) that the Ralari model was always intended for a destroyer, and simply has big crazy guns.
Click to expand...

My guess is that the Spikeri looked like... the Hhriss! We found some interesting history on this at UT: it looks like all the WC1 models (21 of them?) were ordered at the same time and six were cut for space. The early list of ships for WC1 has the Spikeri and then the Snakeir, the Sivar, the Dilligent and so on... but it *doesn't* have the Hhriss. Now it's possible there was even more swapping at some point and many of the ships have changed identities, but what isn't likely is that there's a lost WC1 model out there. Warren Spector contracted them from an outsider (by mail!) in one go... so they didn't have the option of just rendering a new ship, like we would do today.

Every time I see this thread I read it as"WC1 Ralari RIP" and I think to myself 'tell me about it.'

Interesting. Hhriss is just as possible as anything else, I guess - it doesn't look much like a corvette, but that need not mean anything in the context of crazy WC1 designs. I would still tend to believe that there was some model-swapping going on, and some of the ships are not what they were originally intended to be... but ultimately, without any indication that anything like this actually happened, there's not much point speculating about it.

By the way... what about Prince Thrakhath's fighter from the WC2 demo? That demo version always looked to me like something done by the same artist that did the WC1 ships, as opposed to being an early version of the WC2 model.

No, Thrakhath's ship isn't in thee From the coloring though it doesn't feel like the WC1 ships.

Keep in mind that the artist who designed the ships in WC1 was in-house--it was the actual making of the models that was contracted out (to a company in another state.)
F

Amazing Detail. I'm loooking forward to see it textured and in action in WC Saga.

I'm sorry to interrupt the art again, but I had a thought about ship reuse--it's unlikely the Ralari was intended to be a fighter *because* the line art of him with all the little windows was done /before/ the 3D model.

Any news from this Model? Would like to see the finish model

Real Life™ has been keeping me very busy lately. I haven't had much time or motivation to work on this (or anything else). Sorry about that.

I was finally able to start working on the Ralari again... 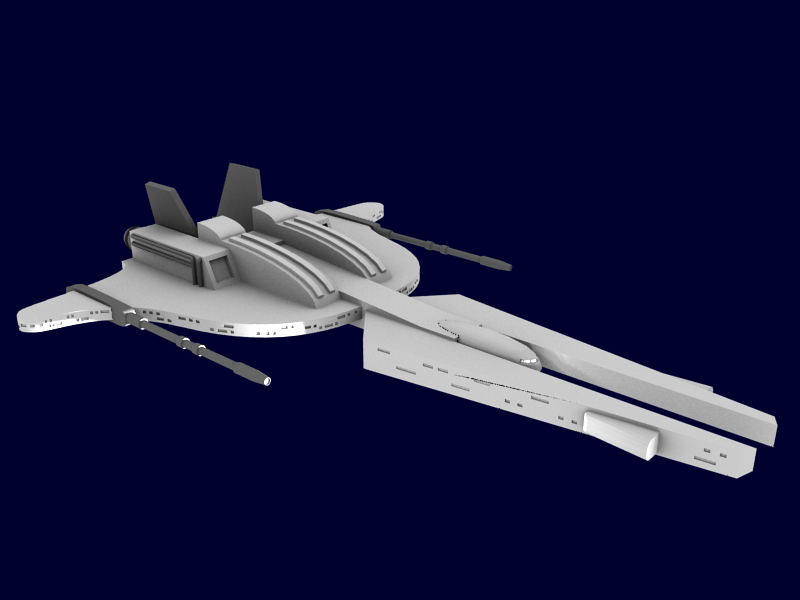 Love it! Especially the part with the bridge.
I just wonder what should be done with the big guns. What are they? And how could we use them in a game? Maybe we can build some kind of special turret in the engine that slews around just a tiny bit, but then you would always have to turn the ship in order to fire at something, which most capship AIs are not really able to.
Or perhaps those weapons are meant for planetary bombardements and are not usable at all against other ships...

I would hate to leave them out so I guess we need something like an explanation what they are and how they used.
Also I wonder how it will look ingame. Especially its size.

My idea was for planetary bombardements. Its useless against a capship. As long as the Ralari need to turn around the enemy ship fires a few salvos and the Ralari is finish. But in a orbit of a planet and from there shot a targets like defence plattforms, facilitys and other buildings they can be usefull. The same as the Venture sideguns. But here the Venture is little and can turn quickly.

Its a little big shorter then the Ralatha. When you take a look at the Claw Marks: The guns up and down in the middle of the ship looks big. Heavy Neutron gun turrets? And 4 Laser perhaps.

I think those big unes under the nose should be the heavy antimatter guns mentioned in Claw marks, and the rest are laser turrets.
For gameplay reasons I would upgrade the turrets visible in the claw marks picture on top and bottom to medium turrets, and add two laser turrets on top and two on bottom. The turrets in the nose are those anti-capship only from Saga, maybe a bit weaker.

Overall I would aim to make it a bit weaker than a Ralarrad destroyer.
In Saga that one has 7 light turrets, one medium and a capship launcher. For the Ralari I would say 4 Laser, two tachyon, no capmiss launcher but two forward-firing anti matter guns should do it. I'm not sure about the last one though, that might be a bit too much. If that is the case we could try other guns there.

A Southhampton should still be able to kill the Ralari without dropping too much in armor, and any cruiser should be able to finish it off rather quickly. Medium fighters should be able to destroy it, so the shields should probably be weaker than those of other destroyers.

I just finished importing the Ralari into FSO for Woolie's Wing Commander: Advance Guard mod. Textures are still WIP, but it looks awesome even in its current form. The model itself (including all of the child meshes) has 10404 polys.
EDIT: Thanks to Wedge009 for the Kilrathi logo! 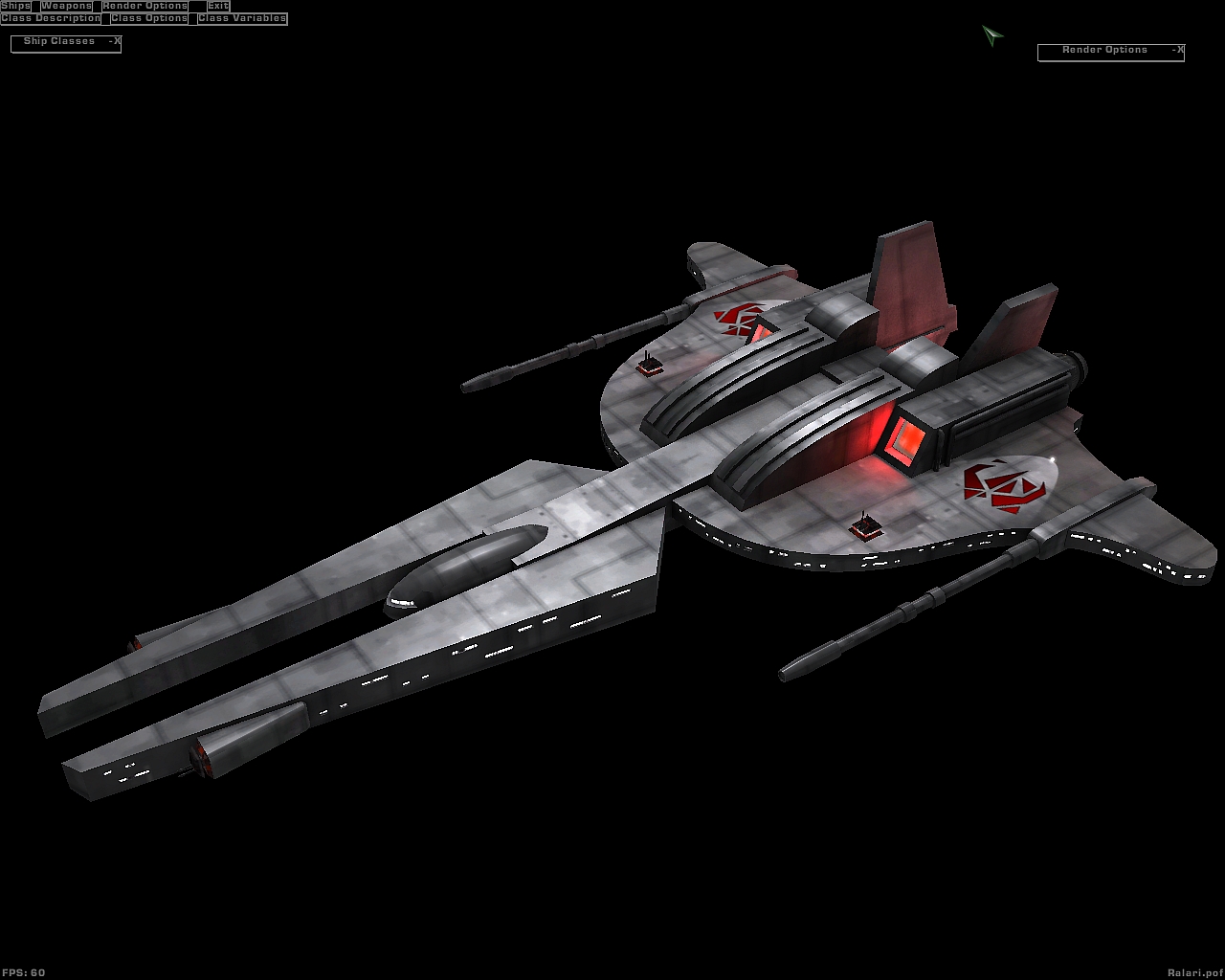 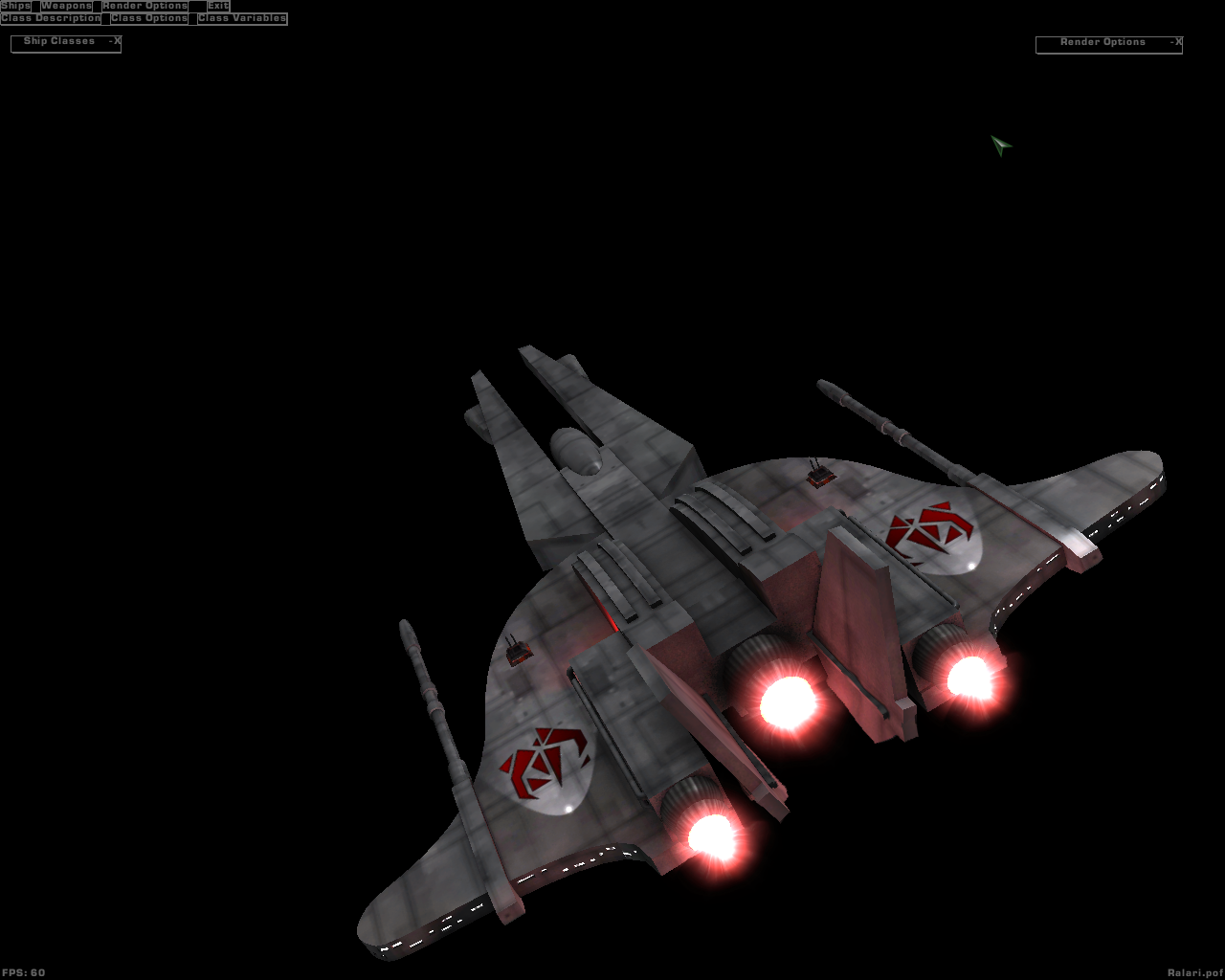 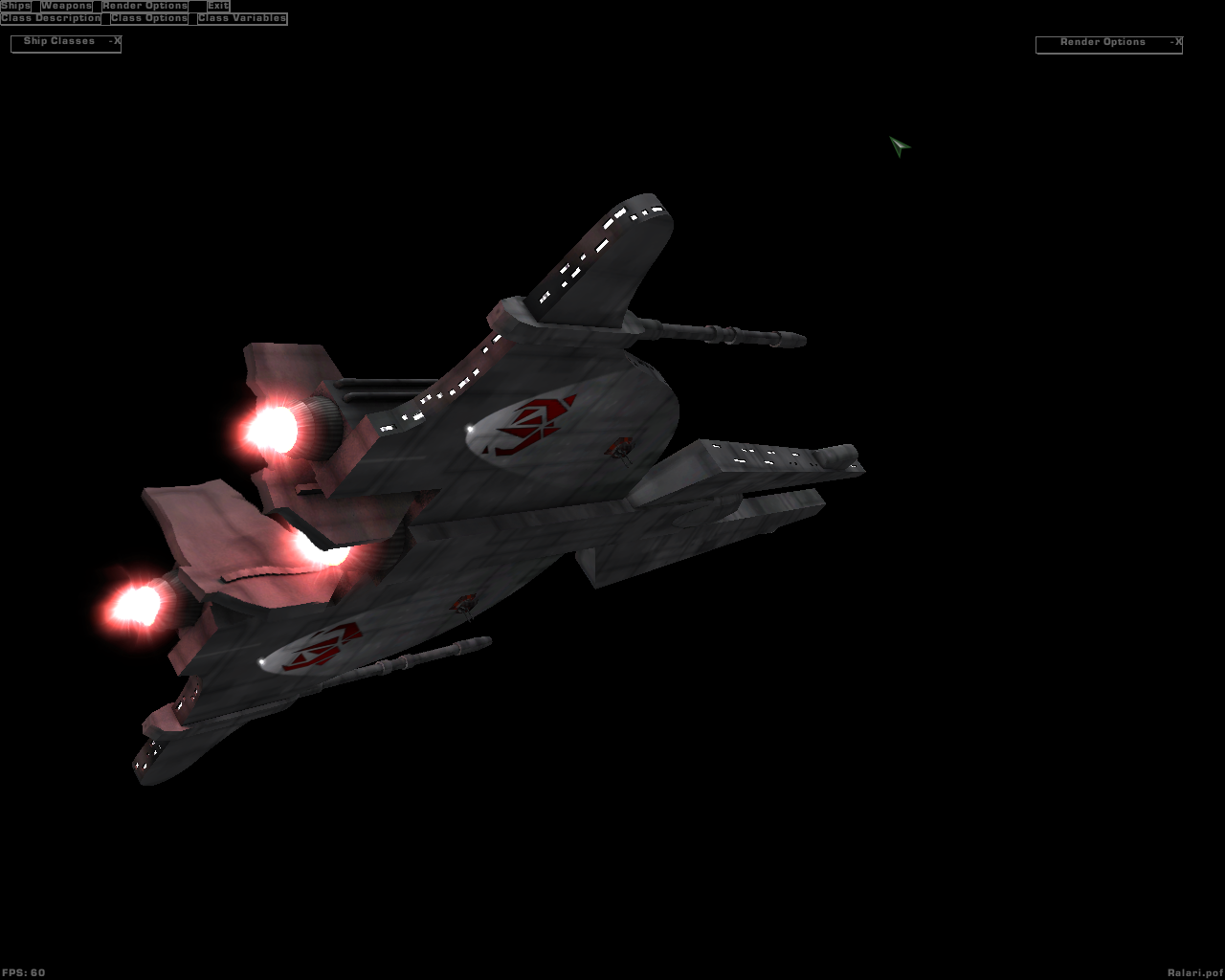 My first impression was "WOW!!"
I just have some minor things about it:
- it could use a bump map
- the armor plating is a bit too big for my taste
- it is extremely badly armed. It looks like even a corvette could kill it with ease. Except when attacking head-on. Except those are really double-turrets.

There is one thing about the textures that bothers me. This is something that the fans have been doing for years - Saga in particular shows this tendency, though I think we had done the same thing a couple of times in Standoff.

Namely, adding windows. Now, I know those little while glowing rectangles look pretty cool, and allow us to show off some of the advanced lighting features (well, advanced back in the day, primitive now

When you first think about it, of course it seems like such an obvious thing to do, to add windows, just because all these capships are so unnaturally featureless. But check out some photos of the USS Missouri (1, 2). As it turns out, the hulls are in fact mainly featureless. And I guess there might be some portholes out there somewhere on that hull, but I cannot, for the life of me, point them out. It does not in fact make sense to add windows to a space battleship for the same reason you don't really want them onboard a naval battleship - anything that potentially reduces structural integrity is bad, and windows generally will be weaker than the armour plating around them.
You must log in or register to reply here.
Share:
Twitter Reddit Pinterest Tumblr WhatsApp Email Share Link
Top