Today we have a couple of hand drawn sketches by AirenWoodmoon. They're both based on RPG notebooks that the artist drew years ago starring the characters from Wing Commander. We don't see nearly as many sketches like this as we used to, but of all the inspirations for such drawings, WC3 has clearly been the most popular. These are based on settings from WC1/2 and Prophecy, which makes them pretty cool and unique. I mean, Shadow and Doomsday? Stiletto and Kevin Tolwyn? What a deep throwback!

So every notebook needs a back cover, right? One of the original Pilots' Notebooks had an insert cover that I had done of the first group I started playing with in the Wing Commander Universe, way back when I was a kid. I've been obsessed with Wing Commander off and on my entire life, and I was indoctrinated watching my dad play the first two games on the Amiga, and playing myself when I was old enough. Anyway, the original insert cover was the crew that I used to role play by myself with when I was a kid and later dumped into the game with my friends. I decided to recreate that drawing for the back cover of the Christmas gift. 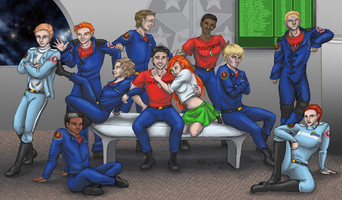 So back in high school I was really into Wing Commander. Prophecy had just been released and I dove headfirst, pulling all my friends into this massive RPG campaign based on the Midway, even those who I had never role played with before. It was massive and glorious and spanned two years, the longest running campaign at that time. (We had ADD. The only reason it lasted that long is that we dropped any and every character we wanted into it.) It was glorious.

One of the ways we would play the RP was through passing a notebook around. Since we started it with a handful of Midway pilots the notebooks quickly became known as the Pilots' Notebook. Think of it like a massive chat board between a slew of characters, except done on pen and paper and passed around between classes. It was only a short period of time before we started drawing covers for these things. And so this is a redrawing of my original cover for the first Pilots' Notebook, showing the original group that started the whole thing.

From left to right, back standing row first:
Group on the bench:
Floor seating:
This picture took me forever, but I'm really pleased how it came out. It was made for a Christmas gift, and I'm glad I get to finally share it.
Click to expand...