Look at what those sneaky Saga guys have hidden in the game files:

I can only presume at one point it was supposed to actually appear in-game since it's a complete .pof with hardpoints and everything else needed, but it seems to have been cut from the campaign quite some time ago, i couldn't find any normal maps like with most of the other models.
There was probably no plausible reason for the ship to be part of the campaign so i understand leaving it out, but the model is just so pretty i HAD to fly it, so i edited the ships.tbl to at least put it in custom missions.
If anyone else is interested, extract the following file into your Saga directory (so you have a ships.tbl in Wing Commander Saga\Data\Tables).
I used stats i took from the ships database and converted them to their Saga equivalent, so it should at least be close to accurate.
There's also a small custom mission where you can test your skills on an Excalibur. But be prepared to react FAST!
Saga Bloodfang.zip

Hehe, someone found the Bloodfang model

There's also a Stormfire cannon and a Leech missile in the game files somewhere. I haven't tried to use them but I think I remember both are not actually working or at least not like intended.
The flyable Bloodfang will be included in my Kilrathi mod as well, but just out of curiosity I will look into your table entries for it, maybe they are better than mine. Creating a normal map for it should be easy for a skilled modeller, there's even a tutorial on HLP for that.
I'm not sure if I have the skills and tools for that, but I'll see what I can do.

Aginor said:
I will look into your table entries for it, maybe they are better than mine.
Click to expand...

Wouldn't bet on that, i just copied the Darket entry, took a calculator and converted the data from the database, filling everything else with what i thought might fit. I think there was more to it than that when the other ships were created.
Anyways i'm sorry if i spoiled a surprise, i just thought the model was a leftover.

Well, mine weren't that good to begin with, so it's always worth a try.

Things I've fixed:
- number of decoys
- weapon loadout
- entries in the description file about shield strength and those things

Problems with that model I've seen so far that still need fixing:
- normal map missing
- engine effects are on the wrong place. I don't know how to fix them but I suppose it isn't hard
- specular map seems to be too strong
- the turn rates are correctly computed as far as I can see but they feel strange. I have to balance that a bit I think... but then the Bloodfang is unbalanced anyway.


btw: I noticed I forgot to write some of the ship information.
Does anybody know the manufacturer of the Demon fighter, for example?

I wanted to give it a try and move the engine flares a little back, but i have problems converting the edited .cob back to .pof. I'll play around with the normal maps a little instead. 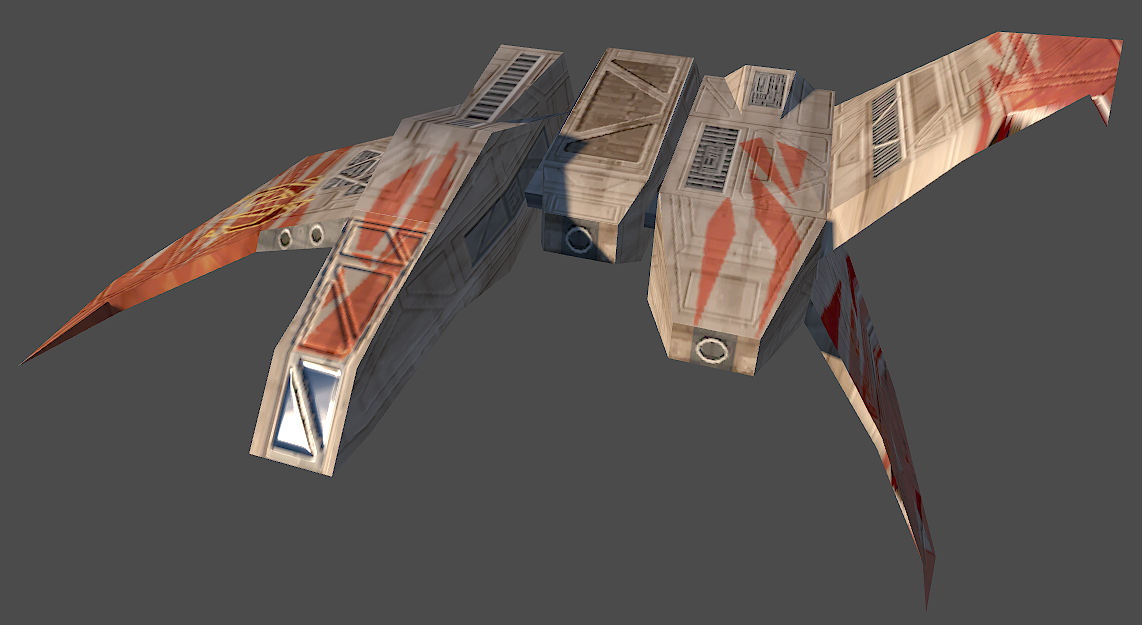 Ok, here's my (very crude i have to admit) normal map for the Bloodfang. Unfortunately i have no idea how to get it in the game, i use Deep Exploration to edit the .cob, but when i open it in POF constructor suite, everything is messed up.
So anyway, if anyone else wants to give it a try, here it is.
Still requires some channels to be switched if i remember correctly.

Its the same model Tolwyn send me 3 years ago with the other prologue ships, but with less maps

I changed the size of the truster from 1.0 to 0.5 and the trusters to the right position: 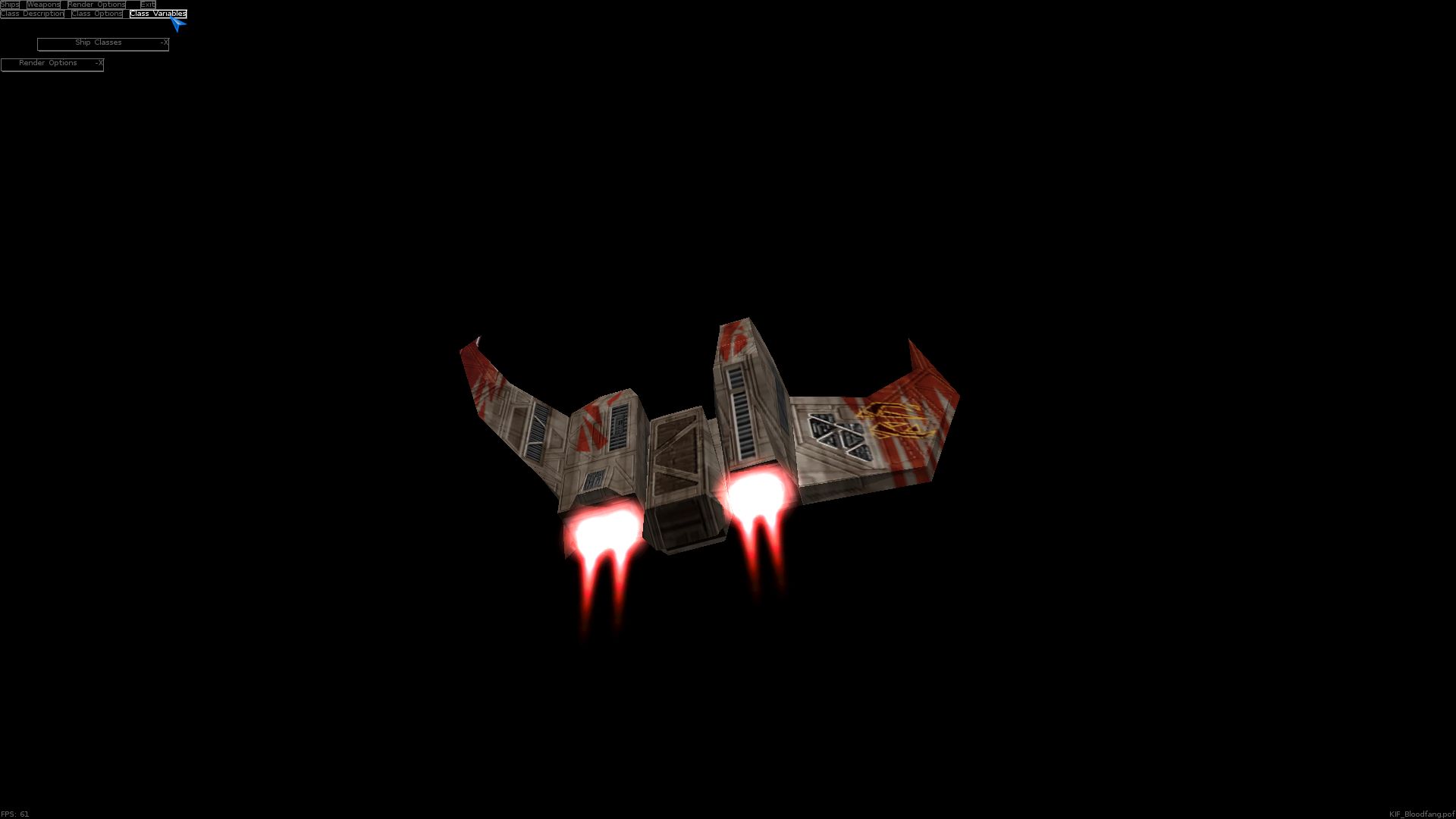 Can send you the POF File

So your version has all the maps? (spec, glow, normal etc?) If yes then could you upload it somewhere so I can download it as well? That could save me some time for my Kilrathi mod.

Two things to keep in mind:

1. Use correct DDS format.
2. Our shaders handle normal maps differently compared to their FS2 counterparts (albeit your map (as posted above) would not work in FSO either). Unfortunately, I am not at my workstation right now and I can't tell you the exact specifications. Open one of our maps in Photoshop (you will need NVidia's DDS plugin) to find out correct color channel usage.

I know what you mean, red and alpha channel are switched in Saga normal maps. But wcnews doesn't allow uploading of .dds or .tga images, so instead i saved it as .png. Which, on the other hand, doesn't support alpha channel, so i left it the way it was. If anyone wants to use it, all he has to do is copy the content of the red channel to the alpha channel, fill the red channel with white and the blue channel with black.
By the way, are the "grey" normal maps in Saga actually bumpmaps, or is there a way to convert them back to a "regular" normal map too?

EDIT: ok, circumvented the whole affair by putting it in a .zip. Here it is. 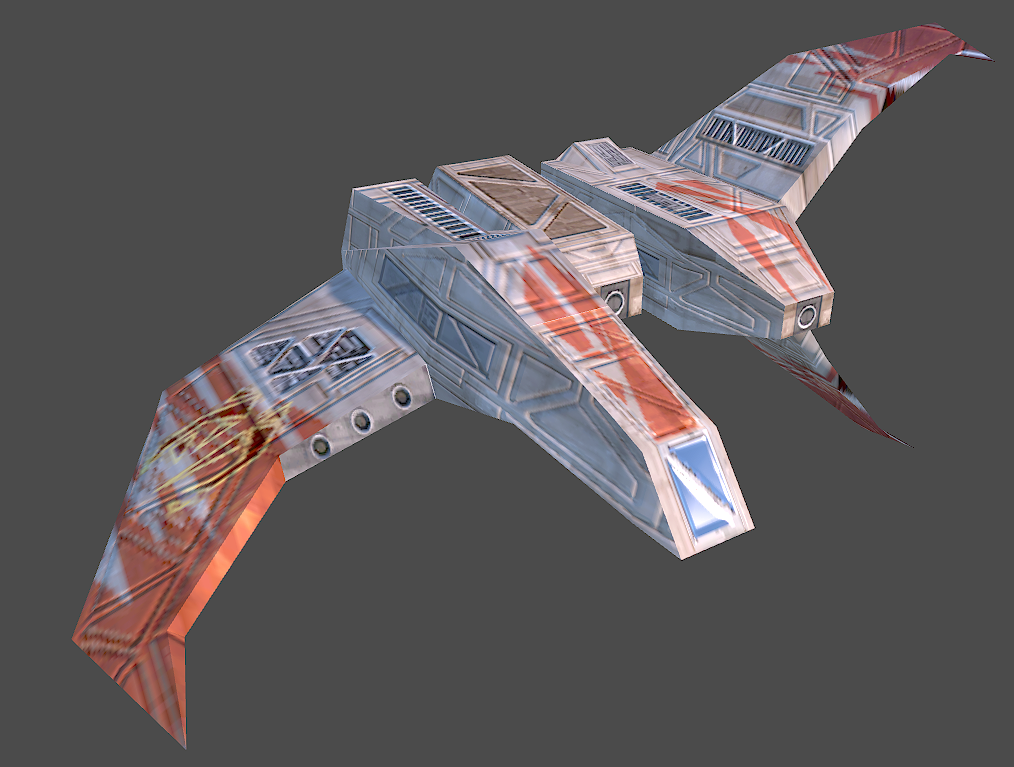 Nice, I'll take a look at it as soon as I have recovered from my FREDing debacle last night.

By the way, i just realised that the Saga Bloodfang is mirror-inverted. Is there any special reason for this?

I also noticed that some time ago and.... I have no clue why it is this way or when this happened.