Guess what I got running today !

struggled a bit setting up my 3DO ! always wanted to see the Super Wing commander on 3DO, finally ! 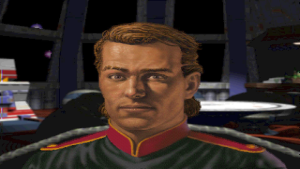 I've been really thinking of trying to get a 3DO and this (because it is SOoo different) and also the 3DO Wing Commander III version for the extra video and different gameplay. Let us know if it's worth it. =)

Yes, they are old games now, but it is interesting to see the differences, theres a bit of 'extra' in both games, wing 3 feels better both in the cinematics and ingame, even the sound moving around up and down the lift, ingame speech, there are more interaction and quotes, the game are somewhat more difficult at times, I tend to crash/collide more easily. Ill get use to it.

Thanks for the heads up - the differences do look interesting. I was watching some clips of Super Wing Commander and I'm like...but...but...that's not the Tiger's Claw! =oP Wing 3 looks interesting flight wise. I'll miss the higher res and landing of the PC version...but then I can always play the PC version when I want that. It'd kind of be fun to do them back to back to really get a sense of all the changes. Thanks for the info!

hehe. I've been browsing. The games aren't too bad to find, so I might get those so I can play around on an emulator even if I don't end up with a system, though I'd prefer going fully old-school. The consoles are pretty available too (though I'd probably want to get it refurbished with a fresh save battery if I went original console route). What I can't seem to find, though, is a 3DO Flightstick Pro, which is kind of a dealbreaker (I'm assuming the PC version won't work). Guess I'll just keep an eye out.

Most emulators sucks for 3DO on PC but you might want to try Phoenix, heard some positive results, you will need the 3DO bios rom file also, similar to Atari Jaguar or like the old Amiga 500.

4do isn't terrible as far as emulators go. It's not the same experience as the full console but it's a reasonable facsimile.

Thanks for the info. I've decided to pick up the games while they're available (that way I don't have to feel guilty if I do use ROMs), and we'll see if a Flightstick Pro for 3DO becomes available. That seems to be the hardest thing to find, so whether I want to invest in the console itself largely depends on whether I can get one of those. I'd honestly prefer to go original hardware if possible as it's just more fun to see how the old systems work without emulation. But, it's nice that emulators might work if there's no other way I can check these out.

I think I found the Flightstick Pro I was looking for. =) So hopefully I'll get to experience these on original hardware soon if all goes well.

Very good stick especially for WC3, On pc I had the Thrustmaster T.Flightstick pro, I used it for nearly 10 years and its still good it just feels a bit to large, I updated to t.16000m now, it felt to stiff in the beginning but now im use to it, better feel and precision.
Last edited: Sep 16, 2019

I really like the CH sticks - I have a retro PC I use for the WC games and have a few backups just in case. The 3DO ones are pretty rare thes4e days, though! I do have a Thrustmaster for my modern PC and probably will go with a PS4 version when I play Rebel Galaxy Outlaw.

At any rate, I got my copy of Super Wing Commander 3DO so once I get all the hardware assembled, I should be good to go. =) [WC3 3DO is on its way too.]