LOAF found a great mention from a game design document for the original Wing Commander a while back. It includes a previously unspecified last name for Shotglass. He is listed as Major Sam Walker (retired). Previous speculation had guessed his last name could be Siegler after mention of his cousin in The Secret Missions. As interesting as this is, it's not necessarily the final official word since Colonel Halcyon's name is listed as Walter rather than Peter. And although not new information at this point, the references to Dart and Joker (who later became Hunter and Maniac) are fun inclusions as well. Anyhow, for anyone out there writing Shotglass fan fiction or for folks involved in the creation of a future WC product, keep "Walker" in mind! 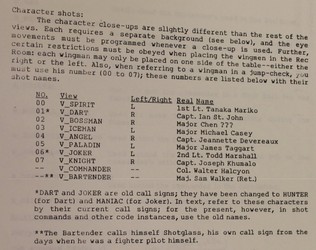