So as I've said recently elsewhere on these boards, my son has been watching me play through the original Wing Commander these last few weeks and he's really gotten into it. He's also been playing Wings of War lately and he's been doing pretty well with that game to; he's even managed to shoot me down a few times. I'd like to try to teach him TacOps, but I'd like to do it with the ships he's familar with (i.e. the craft from WC1).

Are there any notes available on those craft anywhere? Is there anybody still actively playing/developing TacOps?

A question I've wondered myself. Sorry for the late response, I don't get here very often.

I was using TacOps to run a play-by-post campaign on a board I frequent (that has many games including the main game which runs a lot like a Ace Combat RPG with a lot more realism mixed with the technothriller side of Larry Bond and Tom Clancy). I figured I'd give it a go running it as a Tabletop game and try to incorporate a bit more RPG elements into it and whatnot. I built a "Joan's Supplement" that includes ships from the WC1 series as I wanted to start the players there and work to WC2 (my personal favorite of the series). Here is a link to the PDF I put together. I've also uploaded the cards onto Imgur and can put them together in a public album if you wish for a bit easier printing (and I now realize I should have done that before anyways, but you'll see why in a bit when I explain what I was doing). Yes I used a lot of assets from here at the CIC so my apologies in advance for that, I certainly wasn't profiting and like an idiot I didn't make a reference page to reference the authors and sources. Also, the stats were pretty much me taking what WCTO had and reversing them into the stats given in the game manuals, finding the factors that would reliably reproduce numbers for the WC1 ships. Of course capships having no Phase Shields makes things interesting so I hope that all works, we never got far enough to playtest that as you will see below.

Having run a campaign in our air mercenary game, I purposely spun a Wing Commander 1/2 feel into my campaign (I even did narrative text in white, different NPC's had different colors and I was doing my best to make them as colorful in personality/story as possible with their own motivations and goals). After following the progress of WCTO for awhile I decided to see who'd be interested in playing and got many responses from various players in the forum. Sadly, I was in the Marine Corps at the time and hit a busy spell moving bases and eventually transitioning out and didn't have time to keep on top of things like a good GM.

But I tried to capture the feel of WC and get them in the mood (many were fans too) and to learn the rules I began with them doing simulator exercises in the Academy so we could get familiar with the rulesset and that's as far as we got. Now that I've settled into my college routine I should probably get back to running it.

So all my story posts were usually told through placards: 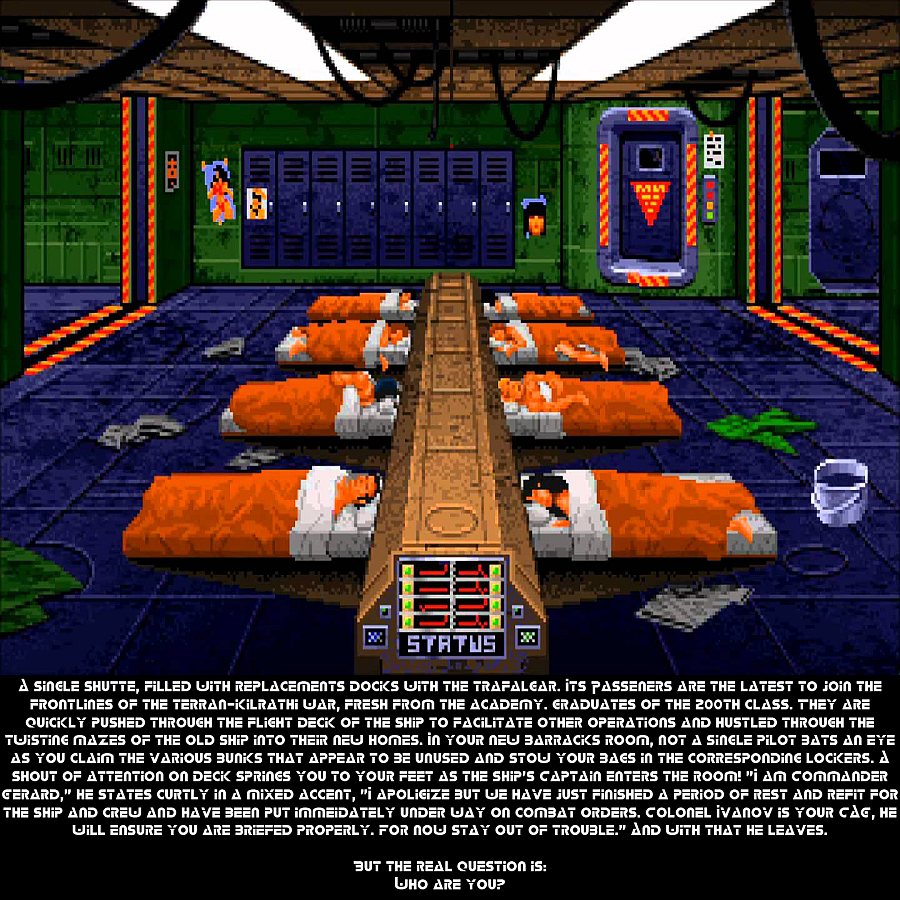 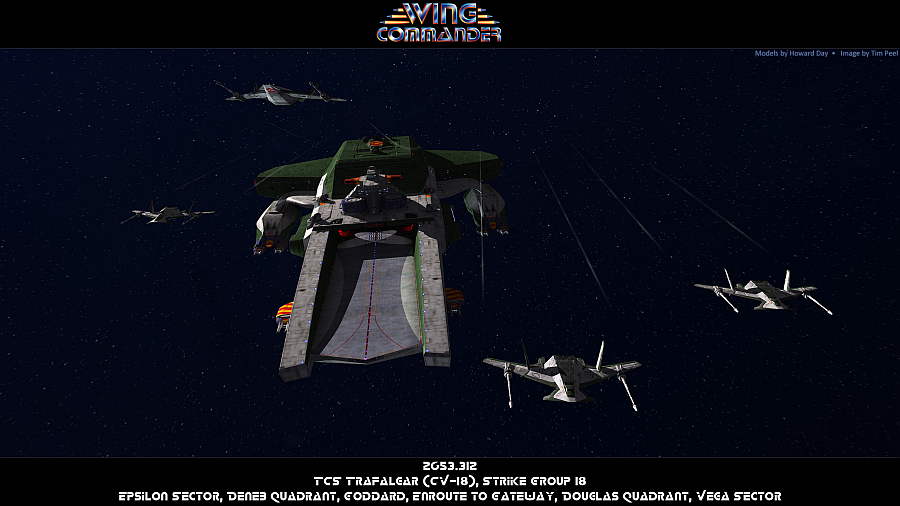 With posts such as this for example (Click the Title Placard for a fun surprise):

Well minus our missing counterpart let's get a test game going: (Oh and like Nam my titlecards have attached muzack. In this case since I can't edit anything yet, only the WC titlecard at the first post and this one are linked) 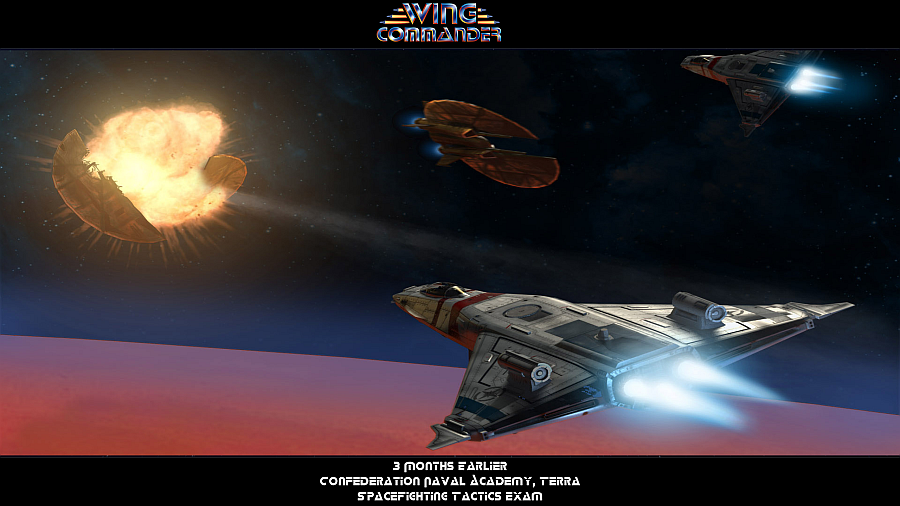 ​
Today is day two of "Hell Week." Actually the second Hell Week. The first is when you are first brought into the academy. This one is what you need to finish to get out. Most of the week is a battery of tests, from academics, to raw piloting, to tactics, all in the effort to create intelligent, and skilled pilots. Little do you know, all the knowledge means jack s*** compared to the experience of the frontline pilots and your Kilrathi enemies. However, the politicians and eggheads believe it makes you finer tuned instrument of war compared to your newly minted peers among the Kilrathi. Problem is, no one ever met a "Kilrathi academy grad." After successfully completing this battery of tests you will be sent on your cadet cruises aboard reserve ships to put your knowledge into a more practical setting.

After that you will be the 200th class to graduate the academy since the beginning of the war. You hear rumors that the war is going so bad that they are going to speed the 201st class through on a more truncated schedule to make up for losses. Only whispered thoughts and hearsay confirm this and your instructors will make no comment on anything that is not related to your training. The leap from Cadet Officer to a commissioned Second Lieutenant is a large one.

The major part of today will be a spacefighting tactics exam consisting of a simulator scenario. Not by yourself or with a wingman as is typical of most of your training but as a large group with varied fighters and different commanders, put up against a similar number of Kilrathi ships. This is meant to test the leadership, strategy, and piloting ability of the cadets to see how well they do in a "combined arms" scenario.

You finish your briefing on the sim deck and step into your simulator pods to begin the mission...

Their pilot stats were tracked by spreadsheet as well as the movement in the current mission on another table on the spreadsheet.
Their craft status would be tracked on one spreadsheet for the players while my master sheet had all parties involved in a mission.

And of course the map.

And the blackboard *had* to make a comeback: 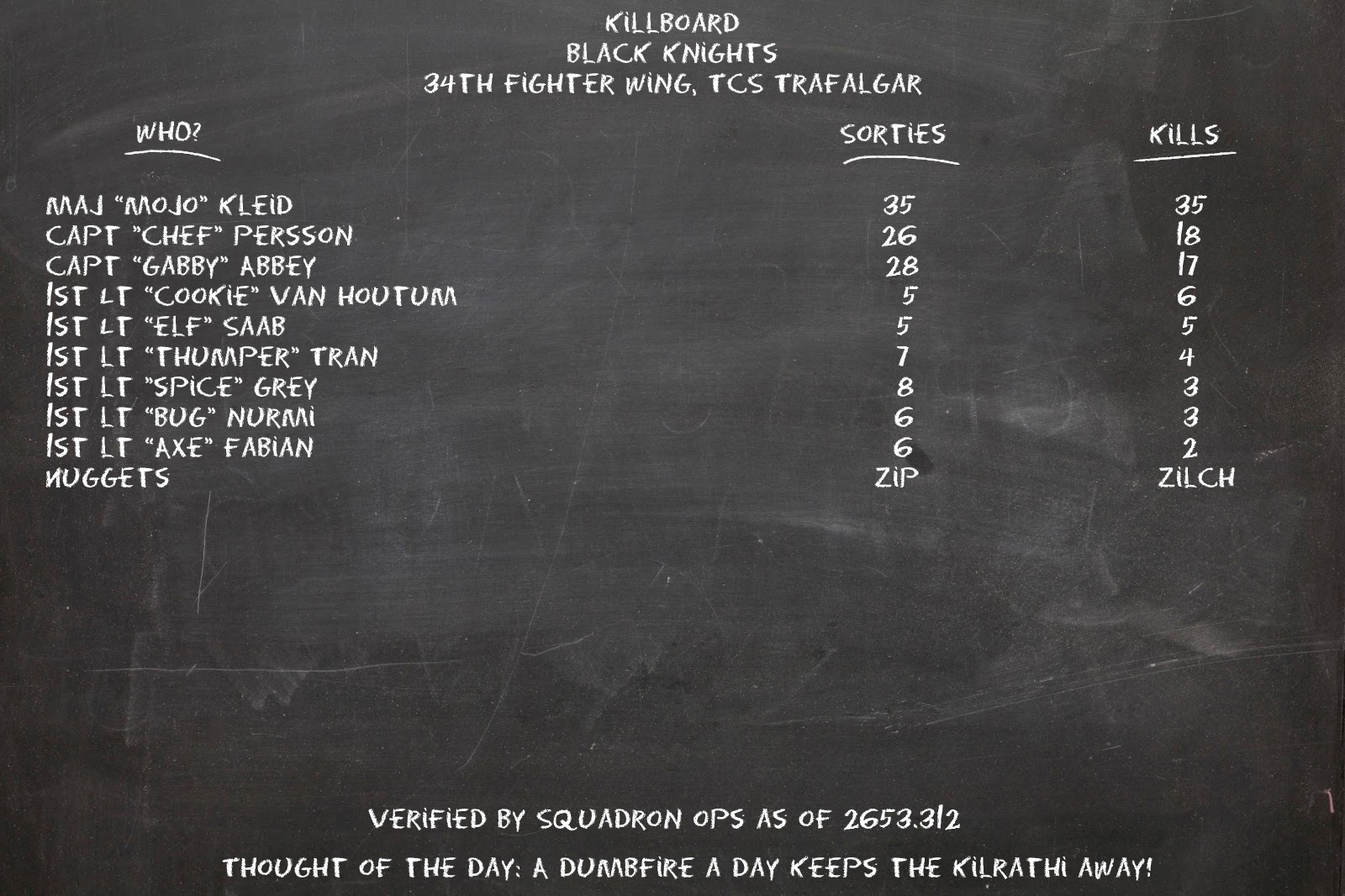 If you have any questions about what I've been doing I'm more than willing to answer them!

That looks like an awesome way of doing things - might have to steal a couple of your ideas when it comes to me and my kid playing the game, if you don't mind too much...

I definitely appreciate the cards in the PDF; they look awesome.

Glad you enjoy it. Anyone is more than welcome to take what I worked and run with it in their own games. I can only ask that feedback would be fun. I floated restarting my campaign to the Planes and Mercs players and many are still interested, so if you find new or modified ways of working things, I'd appreciate hearing them!
You must log in or register to reply here.
Share:
Twitter Reddit Pinterest Tumblr WhatsApp Email Share Link
Top