Last summer I had the pleasure of helping in the production of the feature film Kalamazoo? as a Production Assistant (set/office intern) and it was one of the best experiences I have ever experienced in my entire life. My life dream is to be a filmmaker and it was such a life changing experience to be a part of that production. 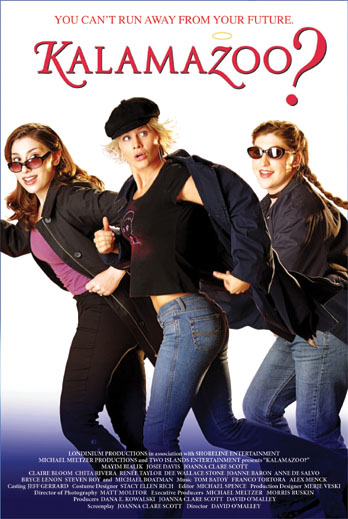 Three women return home for their ten year high school reunion to discover that a time capsule made on graduation night, predicting where everyone would be in ten years time, is due to be opened and read aloud at the impending event. Horrified at the thought of their unfilled goals being revealed, they embark on a 'search and destroy' mission for the capsule and chaos ensues.
Click to expand...

Exceptional news in the world of Kalamazoo?. The film World Premiered April 28th at the Academy of Motion Picture Arts and Sciences Samuel Goldwyn Theatre to benefit Women in Film.

In the Kalamazoo Gazette article the reviewer wrote

Will Hollywood buy 'Kalamazoo?' Not likely

BEVERLY HILLS, Calif. -- After several years in the making, the feature-length film comedy "Kalamazoo?" was shown for the first time Thursday night to a private Hollywood audience. The question now is: Will the general public ever see it in theaters?

Probably not. But that's just this reporter's opinion. An audience filled with Hollywood deal-makers who watched the film for the first time on the big screen at the Academy of Motion Picture Arts and Sciences are the ones who really have the power to answer that question.

Independently made movies -- like this one filmed in Kalamazoo -- have to find "homes" to be shown nationwide. That is, they have to be bought by distributors who will pay to market them, then make and ship copies to theaters. And it's hard to imagine "Kalamazoo?" finding a good home.

The inventiveness of the cast does much to improve a story saddled with cliches that has three women scrambling to avoid embarrassment when they return home for their 10-year high-school reunion in Kalamazoo.

The special effects, good score and multiple locations are impressive for a film with a total price tag of only about $1.5 million. There are many surprisingly touching moments, but too few laughs. Overall, the movie is split between the need to be funny and the need to be meaningful, and it gets lost in between.

Thursday's private screening was a benefit for the Los Angeles nonprofit group Women in Film and a marketing event -- not a red-carpet premiere. Even so, it had plenty of panache for its audience of nearly 500 people. After the movie's producers, Kalamazoo natives and sisters Joanna Clare Scott and Dana Kowalski, said a few thank-yous, the city of Kalamazoo glowed brilliantly on the massive screen in the Samuel Goldwyn theater, which is permanently decorated with a pair of looming, golden Academy Award Oscar statues on either side of the stage.

The film's director, Battle Creek native David O'Malley, obviously knows the city and its best sites -- as does director of photography Matthew Molitor -- because they make Kalamazoo look inviting and rather sunny (it was filmed over five weeks last summer). At the reception after the screening -- which offered champagne to wash down the goodies from Kalamazoo's own Sweetwater's Donut Mill -- three people said the movie made them want to visit Kalamazoo.

While the city's landmarks, parks and businesses looked good in the film, the story bothered Sue Flakes, a writer and film director. "It had some memorable moments," she said, "but it was comedy and it was serious, too. And to be honest, I'd like it to just be one or the other."

In the film's storyline, the three female leads, Joan (played by Scott), Carol (Josie Davis, who carries much of the movie) and Maggie (Mayim Bialik, star of TV's "Blossom"), get into trouble as they seek a time capsule hiding their high school secrets. Their three deceased grandmothers (played by two-time Tony Award-winner Chita Rivera, Claire Bloom and Renee Taylor) get a special dispensation from an angel (Michael Boatman, of "Spin City") to return to Earth and help the women through "a transition year." However, like the split-screen effect used occasionally in the movie, it's hard to appreciate the three leads' slapstick mission to find the capsule alongside their earnest attempts to live fuller lives.

"It didn't work," freelance journalist and author Luke Ford said afterward. "I wanted to like it, but it didn't take (me) anywhere emotionally. ... It was really cliched. They all reach inside and get in touch with themselves. You'd think they'd (the filmmakers) come up with something different."

There was very good work from Bryce Lenon (TV's "The Division") as Jonathan (Scott's love interest in the film) and from Steven Roy as Paul (Bialik's love interest). In cameo roles, Kalamazoo locals Michael McClendon and Western Michigan University students Diana Wilson and Nicolas Pangborn drew laughs. Pangborn and McClendon were at the screening, enjoying their film debut.

"I just wanted to bring a little hip-hop to Hollywood," said McClendon, who is also a rapper.

Thursday's screening marks an important milestone for Scott and Kowalski, as their movie enters a critical phase of being shopped around and considered by distributors. If no distributor buys it, it could go straight to DVD and not play at theaters at all. No one can tell at this point which way "Kalamazoo?" will go.

The sisters have said they would like to have some sort of premiere event in Kalamazoo whether the film sells or not. At this point, they don't have control over when that might happen. Such a screening could be arranged after it were bought, which is still a possibility.

"It's a very good movie considering what it cost to make, and that's an important thing in this town," independent filmmaker Lance Vanderbilt said, referring to Hollywood. "The job now is to get it seen. The battle is just beginning for them."
Click to expand...

The article is kindda brutal, but I guess I can understand where the reviewer was coming from. Tho I tend to not trust the critics. Most of the time I don't agree with them since they are way to critical of most comedies.

The producers of Kalamazoo? wrote recently on the movie's website

'KALAMAZOO?' GOES TO HOLLYWOOD
Kalamazoo has arrived in Hollywood! The town famous for sounding fictitious is no longer unknown. Hollywood executives, insiders, actors, writers, producers and directors were among the 500 people treated to a glorious representation of the city and its people when 'KALAMAZOO?' had its Hollywood début screening in the prestigious Samuel Goldwyn Theater at The Academy of Motion Picture Arts and Sciences on April 28, 2005, in Beverly Hills.

The audience laughed, and at times shed a tear, while following the adventure of the three main characters - Carol, Maggie and Joan - and their quest to rid themselves of a time capsule and their issues with its contents.

Members of the cast and crew were also in attendance including Mayim Bialik, Josie Davis, Dee Wallace Stone, Renée Taylor (accompanied by her husband Joe Bologna), Joanne Baron and Anne DeSalvo. Nick Pangborn and Michael McClendon, two of the actors who are also Kalamazoo residents, flew out to catch their own, personal film début. Director David O'Malley and Executive Producers Michael Meltzer and Morris Ruskin were also present.

After the screening guests were treated to a dessert reception in the Grand Lobby of The Academy, which included donut holes shipped in that day directly from Sweetwaters Donut Mill in Kalamazoo. Sweetwaters is a prominently featured location in the film and everyone enjoyed the opportunity to sample what had just been seen on screen!

The atmosphere was exciting as everyone mingled, talked about the film and played kazoos - supplied by the Kalamazoo Convention & Visitors Bureau.

Producers Dana E. Kowalski and Joanna Clare Scott were thrilled with the turnout and response to the film. The idea behind the screening was to create some 'industry buzz' and make people aware of the film - and that is certainly what was accomplished!
Click to expand...

You can check out pictures from the recent screening here .

After seeing the trailer I am even more impressed. It looks like a pretty hilarious film. It's going to be pretty exciting to see what happens and goto the premiere.

Check out the links above at your leisure.

Congratulations, piranha - not everybody gets a shot at the entertainment industry, and even if the movie won't win an Academy award, it'll still be someting to build on.

I actually lived in Kalamazoo once for a short time, and quite liked it there. Except for the name.

Kalamazoo has two great things of note in it (IMO):

1. The really really spiffy Kalamazoo Air Museum.
2. The All you can eat Godfather's pizza buffet...truly the greatest.

IMO, Kalamazoo has only ever had one thing worthy of note - the TCS Kalamazoo!

Yea! Godfathers buffet is gonna be freaking sweet. My friends and I are going there tomorrow for pizza and cheap beer.

What class is the TCS Kalamazoo?

I believe it's one of those "we don't know what it is, so we'll list it as Concordia-class" carriers.

I ate the salt and pepper stolen from Steven Spielberg's desk once.

LeHah said:
I ate the salt and pepper stolen from Steven Spielberg's desk once.
Click to expand...

No, theres actually a factual story that involves that. I only happen to take part in the last 1/5th of it.

LeHah said:
No, theres actually a factual story that involves that.
Click to expand...

I also want to be a filmmaker.... Maybe we'll work together sometime!

LeHah said:
I ate the salt and pepper stolen from Steven Spielberg's desk once.
Click to expand...

A friend of mine worked at a car dealership where one of the other salesman sold Steven Spielberg a car. The other salesmen were asking what he was like, and the one who sold him the car foolishly joked: "He was great, he didn't try to Jew me down or anything!" Unfortunately for that salesman, Spielberg overheard that comment and pressured the dealership to cancel the sale. Of course they agreed and took the car back.

I also had Tom Hanks and Hugh Hefner as customers... not the famous ones though. Hugh wasn't related to the famous Hugh and grew tired of people commenting on the similar names. Tom Hanks turned out to be Tom Hank's uncle who the famous Tom Hanks was named after.
You must log in or register to reply here.
Share:
Twitter Reddit Pinterest Tumblr WhatsApp Email Share Link
Top