Anyway here it is 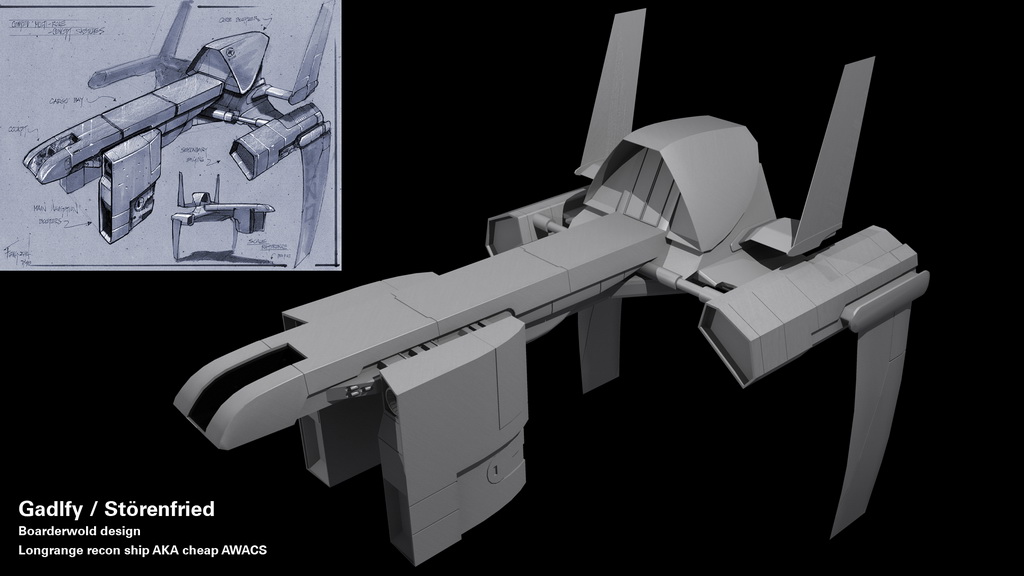 As you can see its based on one of Feng Zhus designs.
I changed the idea behind this ship a little bit. Its no longer a "Confed Multi Role...whatever"

I decided to go in a bit different direction and here is the story behind it.

-----
The Gadfly is a new type of Longrange recon ship designed by the Boarderworlds.
Since the BW can't effort to many real AWACS ships they decided to create a smaller ship that has less powerfull AWACS capabilitys but still can provide better recon data then the normal Banshee pilot can deliver.
It is also equiped with C3 unit (Command, Controle, Communicate) that provides the second pilot with all the information to coordinate larger fighterwings far away from any capital ship.

This provides the BW with a highly mobile plaform to extend their operations without the cost of an AWACS.
Still all this comes with a price. The fighter is poorly armored and shielded.
It has 6 laser canons but Pilots tend to say they are just there to scare enemys then run like hell !

The Gadfly is also equiped with quite big bussard collectors so it dosn't depend on refuling jumpfuel as much as other fighters.
-----

Thats is my basic idea.
I know the model isn't a 100% replica of Fengs art, maybe when I have time again I will work on that but for now I think it will stay like this.

What do you think about the "story" behind the design? Plausible or to strange?

gevatter Lars said:
What do you think about the "story" behind the design? Plausible or to strange?
Click to expand...

It's funny that you've made it into a recon craft, as I actually thought your design had a resemblance to the Global Hawk UAV.

As for plausibility, a major issue for me is whether the Border Worlds are designing high tech new ships at all really. If you can't afford an SWACS, you can't afford to design a new light SWACS ship. It's the design and initial development of a ship that are killers more than the unit cost down the line. So it'd be much more affordable for them to license a a Seahawk or something and make more of those than build a new light SWACs from scratch.

And it's not really the *Border Worlds* that designs and manufactures ships. McCall Industries, Douglas Aerospace, Origin Aerospace, etc actually do this, and then they sell their ships to Confed and Border Worlds. And they need to recoup the development, so a new light SWACS again costs more than old trusty Seahawks. Also think about the timeframe that this might be developed - the industrial base outside Sol Sector gets just ravaged during the late 27th Century due to the Nephilim war.

Frikken Sweet! Been waiting for someone to latch onto those cool Feng Zhu designs! Such a shame nothing came of them, I really like the style. I agree with Chris, would much prefer to imagine it blowing things up than just finding hidden things... Looks like it would be more of a heavier fighter/gunship going by the size of the thing (assuming the black section in the front is a standard-sized cockpit).

Keep up the awesome work!

Mh that is a good point you have there Chris about the development cost. I haven't thought about that.

Maybe I have to change the background story a bit to let it be joint effort of Confed and the Borderworlds for the industrie to develop the Gadfly in the end.
Something like that..have to think about it.

About the role if the ship, its currently quite big. The cockpit has two seats and lots equipment for the secondary pilot. I haven't mesured the plane yet but would guess its about the size of a Broadsword.
If you look closely at the concept art there seams to be a door next to the cockpit glass. Looking how tiny it is compared to the rest of the ship makes me belive that this one was supposed to be more of the size of a Privateer ship then a fighter.
Thats also a reason why I changed its purpose from a fighter to a recon ship. Its just too big for a fighter. Maybe a bomber.