Alright, we're underway with our second round of wearable Wing Commander Apparel.

We're going to have a quick poll about the hats.

Originally, we were thinking of a hat with an embroidered Confed star on the front, but then someone suggested we go for a navy style hat for the TCS EISEN to go with the red TCS EISEN shirts we're ordering.

They would both be embroidered.

The the attached image for what I mean. The top is the confed logo that would go on the hat. The bottom is the NAVY style hat we would base a TCS EISEN hat off of.

Add anymore comments you have about the hats (we're well aware that some of you would prefer fitten hats).

ALSO, we're ordering a few more polos really soon. If you'd like a custom polo with your name on it, contact Chris Reid ASAP.

Yeah, reply to me like tonight if you want a name on a polo
S

I'd still love to see a black and gray ringer tee with various WC insignias on it. Like the shirt is gray and the collar and sleeve edges are black. And the Border Worlds, Confed, Kilrathi, or Black Lance insignia is black in the center. I should draw something crude on Paint to show you.

I think I need to see the Eisen shirts

powell99 said:
I think I need to see the Eisen shirts
Click to expand...

You know the red shirts in WCP that say 'TCS Midway' on them?

They're like that, except they say 'TCS Eisen'.
D

I like the idea of a cap with a confed logo.
Just a quick off topic question, what is Shangri-La. It sounds familiar.

It depends - could you give us a more specific design for the Eisen hat? Would it have the carrier on the hat like it does on US Navy caps? Or would it be more like the Tiger Claw hat me and LOAF have?

It would have the carrier sillouette, like a modern-navy hat.

Just a quick off topic question, what is Shangri-La. It sounds familiar.
Click to expand...

In this instance, it refers to a United States aircraft carrier (WW2 era). The name comes from the mythical lost city in the novel Lost Horizons.

I vote for the Eisen hat then.
T

I like the Eisen hat because it's a much more plausible design. The crew of the TCS Eisen may very well have worn hats like those, while I doubt anyone on the ship (or in the TC) would wear a Confed logo hat. It'd be like some random person on the street wearing a hat with just the American flag on it. Sure, they're out there, but they're not really fashionable.

I think the Eisen hat would be the way to go, and I look forward to getting one!

I'd also like to add that the Eisen hat would make more sense if we ever did those Prophecy Flight Suits somewhere down the line.
J

There's no way you guys could slap the silloutte of a WC Carrier on the hat? Also I feel it important to point out that when the Doolittle Raid bombed Japan from the USS Hornet, President Roosevelt said the bombers flew from their secret base at Shangra-li, which is why a carrier was later named after it.

A silloutte is a great idea. What class is the TCS Eisen? I'll get a silloutte done.

I would like to add that it would to too expensive to do both hat styles. Each different set of art work would incur a $100+ design fee making the hats very expensive considering we will only be ordering several dozen.
M

Would it be able for us to have the Eisen hats with the design on front, and on the back maybe have the confed star?
D

LeHah said:
I'd also like to add that the Eisen hat would make more sense if we ever did those Prophecy Flight Suits somewhere down the line.
Click to expand...

I strongly agree with this. It would go well with Flight Suits (with the orange Eisen shirt) or even Navy/Space Forces Uniforms.

DyNaMiX said:
I strongly agree with this. It would go well with Flight Suits (with the orange Eisen shirt) or even Navy/Space Forces Uniforms.
Click to expand...

The Confed star would also perfectly match the patches we have on the suits. 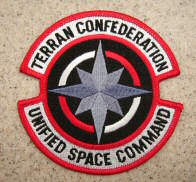