Halman recently challenged BradMick to create low polygon models of Wing Commander 2 ships to test their feasibility in the Wing Commander 3 engine. The attempt was successful. Both the large Broadsword and tiny Ferret were trimmed down below WC3's 500 poly limit while retaining their distinctive shapes and styles. The first two shots demonstrate this polygon mastery. The textured Ferrets are from a similar 986 triangle experiment that produced pretty results too. These are a very impressive leap over BradMick's first Ferret almost five years ago (pictured last). 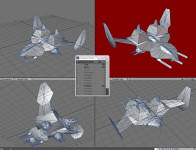 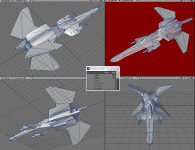 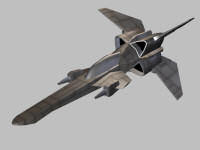 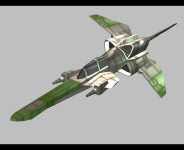 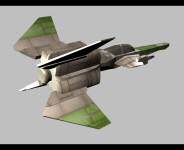 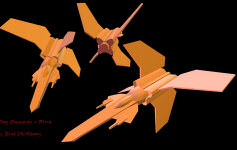 ​
Also as of last week, Brad is officially a US Army Warrant Officer Candidate. He'll soon be shipping off to basic training, then proceeding on to WOC and flight school. Congratulations!

Sorry for being so ignorant, but why does everything have to be done in polygons? I mean, the Ferret's guns aren't square, and they look really odd being that way. Why can't we just make them round?
D

Good job with the models, and Good luck with training.
P

Bearcat said:
Sorry for being so ignorant, but why does everything have to be done in polygons? I mean, the Ferret's guns aren't square, and they look really odd being that way. Why can't we just make them round?
Click to expand...

Basically, 3D models are created by mathmatical coordinates and combinations known as polygons. Laws of math state that the shortest distance between two points is a straight line. What may look like a cylinder in 3D is actually hundreds of polygons packed tightly together to give the illusion of a curved surface.

So, to answer your question, creating cylindrical guns on the Ferret would up the polycount significantly.

(the real answer is alot more complicated but no one wants to read pages of technical babble...)
L

Bearcat said:
Sorry for being so ignorant, but why does everything have to be done in polygons? I mean, the Ferret's guns aren't square, and they look really odd being that way. Why can't we just make them round?
Click to expand...

Tell me a better way a complex 3d object can be described for a real time engine than polygons. You can get the Nobel Prize if you can.
Btw, do you have any idea how a cylinder is built from polygons? nope, i think. Then don't crit someones hard work... oh, and how about Reading the headlin first, than replying. Thank you.

lorddarthvik said:
Tell me a better way a complex 3d object can be described for a real time engine than polygons. You can get the Nobel Prize if you can.
Btw, do you have any idea how a cylinder is built from polygons? nope, i think. Then don't crit someones hard work... oh, and how about Reading the headlin first, than replying. Thank you.
Click to expand...

No need to act like a dork. It's a valid question. It's not necessarily an intuitive idea at first. You'd think you could just take a center point, generate points at a set radius from the center and then give it depth, but each of those points has to be defined. Even if you had thousands of them, you'd still be dealing with thousands of polygons, not a "true" cylinder.

And yeah, the point of this project was to drop the polygon count below 500.
F

Tell me a better way a complex 3d object can be described for a real time engine than polygons. You can get the Nobel Prize if you can.
Btw, do you have any idea how a cylinder is built from polygons? nope, i think. Then don't crit someones hard work... oh, and how about Reading the headlin first, than replying. Thank you.
Click to expand...

Please know what you're talking about before lashing out at someone. He just asked why the barrels can't be round, he wasn't claiming to know.

A polygon is simply an object built by connecting points with lines, like a connect-the-dot. The area on a plane between those points and lines formes a side, which looks like a solid object. When you see a really good 3D model, and it looks like the surface is in fact round, that is because it is made from hundreds (or thousands) of very small, thin panels. You could have very round looking barrels, but the computer would have to work hard to render it in 3D, especially the old computers that Wc3 was built for.
B

thanks gents, and its a valid question. i dont/wont pretend to know all the technical aspects of it, but polygons are the means with which we build our models in 3d. computers have come a LONG way, especially since the days of the first 3d engines. once upon a time the highest count achievable was a measly 500 or less, now we can do up to 10,000 triangle models for games which allows us to use more polygons to round out things which should be round. the guns are they way they are because of all the shapes to use for modeling, the cylinder is one of the more intensive. in order to get a really nicely rounded cylinder which appears perfectly round, you have to up the poly count a lot, which in turn eats away at the polys/tris (whatever) you have to build the rest of the model. for an object that will be seen from a far off distance, you don't really need to have super rounded cylinders. now, on a larger object thats seen up close, you add more sides to make it appear more round.

and yeah, don't jump on the poor guys back, for anyone not familiar with how this stuff works, its a good question and i hope i answered it well enough.
P

Nice model for a low polygon one. Any plans on using it?

Thanks for the replies, I actually am mildly familiar with how polygons work, and it never made any sense to me that game makers would WANT to use polygons. I remember creating curved lines on a graphing calculator and all it took was a simple formula. But maybe it wasn't really as simple as the formula made it seem.

Yeah, curves are really great and sometimes simple to describe via a mathematical formula, but it seems that parametrized surfaces are not as cheap as polygons, so polygons is what we're stuck with as far as real-time rendering goes.

Good job on the models Brad, I'd love to see that Broadsword textured (mainly because there aren't many decent Broadswords around)... maybe then you can import these into WC3?

The problem is that those lines, called "splines" (or vectors, in 2D parlance) can only be used to create 2D images, a la Flash animations. I suppose that if you really wanted you could try making a 3D model out of splines entirely, but ... well ... how many two-dimensional circles does it take to make a three-dimensional sphere? Or, put another way, how thick is a line?

Now, there are some techniques that use splines for modeling, called NURBS, patches, or the like, but even then what you have is a "cage", a skeleton made up of splines. If you want something that's a human torso and not just a ribcage, you need polygons to give it an actual defined shape.

I hope that made sense.

Bob McDob said:
Now, there are some techniques that use splines for modeling, called NURBS, patches, or the like, but even then what you have is a "cage", a skeleton made up of splines. If you want something that's a human torso and not just a ribcage, you need polygons to give it an actual defined shape.
Click to expand...

Well, NURBS can be used to make complete models - the Shok'lar that appears in the episode 2 intro is an example of a NURBS ship (...converted to polygons for Standoff, of course).

The problem with NURBS, though, is that today's hardware does everything it can to accelerate polygons. Because our graphics cards are so polygon-oriented, many games today use polygons even for the 2D elements of the game, like the user interface and all that... because it's faster than trying to draw them the traditional method.

I vaguely recall something about the PSP having some support for NURBS technology, though. It certainly will happen sooner or later for PC graphics cards - it just hasn't happened yet, that's all.

Quarto answered that correctly, NURBS currently just hasn't had the proponents within the industry to push it forward as a primary use of modelling. For one thing NURB created models are typically (although not always) harder to create. Most game modellers today box model their designs today. NURBS are used to create most organic designs and curved surfaces but to be used in practically any game environment they have to be converted to polygons and in most cases can result in an extremely high poly count (depending on the model).
B

spot on both ways. nurbs is a pain in the butt to model with (in my opinion anyway) and actually a lot of industry folk feel the same. while nurbs is fun and useful, and if you're using a package like maya, allows you to actually 'sculpt' on the model, ulitamately you can get the same results faster and with a lot more fine detail with polys. box modeling and a mesh smooth operation can go a long way to creating some killer models. also, whats great about the box modeling/smoothing after deal, is that you can use the low poly version, the 'cage' as your model for animation and then when you're all done setting everything up, smooth it and render it out. saves a lot of time and processing power when you're trying to quick get something done. in order to animate a nurbs human, you have a huge long process you have to go through in order to make sure each nurbs patch is setup right for deformations and stuff. its easier just to model it with polys and quick rig and weight that way. i think the only industry that uses nurbs is the automotive. modeling folk pretty well gave it up for box modeling because it is seriously way easier.

oh man..and if you've ever modeled with nurbs...the bain of your existence comes with 'socking'....jesus it sucks

NURBS is a means to describe curved surfaces with infinite detail.
But, in order to render them, you have to convert them to polygons. That's called tesselation.
There's no technique as of right now that can render NURBS software without tesselation.

A modern technique of volumetric rendering could be applied to this kind of surfaces (including NURBS) to render them without tesselation. Basically, I'm thinking of the split-stream Fourier transform. It's possible to get the fourier transfor of such a surface mathematically, and hence evaluate the thing and... well... render without polygons. But such procedure is very complex, not mechanical, and so a modeller would have to be a trained mathematician to be able to tell the computer how to render the stuff.

That's why today's hardware is limited to rendering polygons. It's the only primitive shape that can be rendered efficiently and is practical to handle.

Well... there are spheres (and their deformations), but that's where the "hardware acceleration was only developed for polygons" comes into play - even if there are techniques to render raytraced, perfect, cylinders and spheres... there simply isn't any hardware support for them. Well... soon, it'll be possible to implement raytracers in GPUs (programmable graphic cards), and perfect cylinders and spheres could become a reality. But not today - today's GPU raytracers are of academic interest only (hey, but they exist!)
You must log in or register to reply here.
Share:
Twitter Reddit Pinterest Tumblr WhatsApp Email Share Link
Top