To get straight to the point: I wanted to write a short experience report about printing 3d models beyond finished STL files. There are spectacularly good and detailed 3D models of howie day here, which I wanted to print. It becomes problematic if you want to copy them directly into slicer software, because these models often have "open meshes" and "too" much details.

What you can do:

1) Convert the model files. Here you have the possibility to make this online with various OBJ, DAE, 3DS, MAX files to STL, OBJ services. You can also open it natively with the respective designer software (trial version). In the case of Howie Day's F-36 Hornet, I loaded it into 3D Studio and exported it as an obj.

2) Open the files in Meshmixer and click Inspect. Inspect finds the open meshes and can correct them if necessary. The purpose behind it is that 3D meshes must be waterproof for optimal 3d printing. Often, some parts of the model cannot be corrected automatically. In the case of the Hornet, these included the engine and parts of the wings. In addition, the cockpit was completely unprintable. There are some things you can put up with, some like the cockpit and the wings you have to correct. Mesh mixer can select individual parts from the model. This is very handy because I wanted to print the Hornet very large. I have saved the entire model in wings, cannons, rockets, and bodies in separate files. After that I cut some parts again with a "plane cut". The goal was to glue everything together again later.

3) Improve 3D objects: I have used Autodesk Fusion 360 and an old version of 123D Design to redesign simple parts and surfaces in existing meshes. Some individual parts may not be edited in the conventional way (open meshes). I solidified these parts with Meshmixer. There's a function there that needs to be played around with.

4) Scaling and printing: All parts should then be printed individually. If everything goes well, you get great prints, if you make mistakes you have to improvise. I had a lot of trouble with the engine. (dremel)

I have experimented on this model for a long time with all kinds of programs. Basically, however, it is the listed steps that have always appeared in similar models.

It'll be a pleasure to help you guys if I can!

Here are some photos from the development stages. 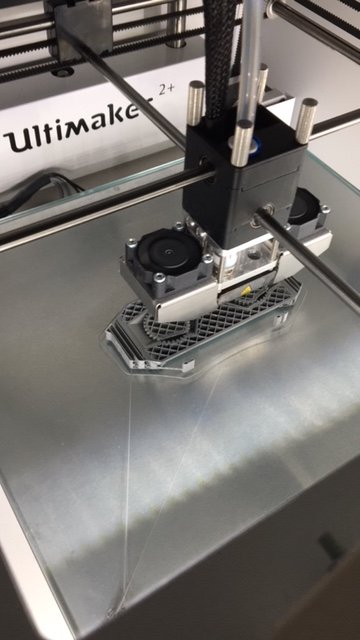 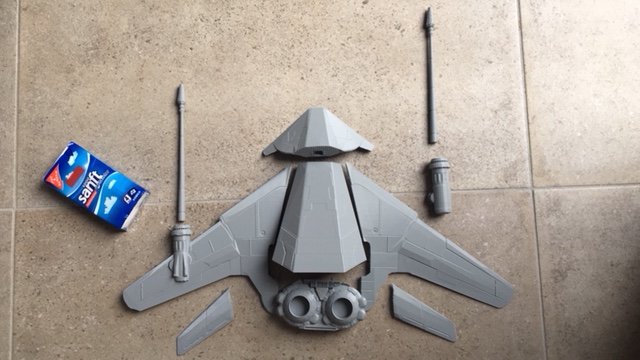 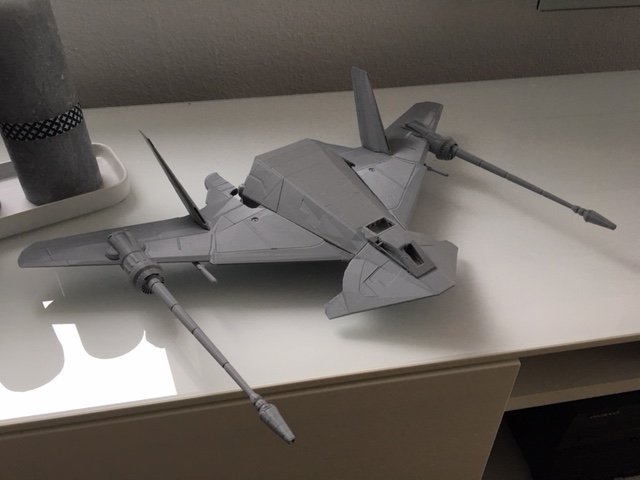 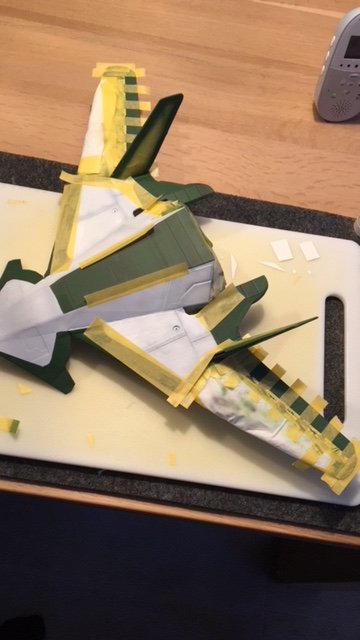 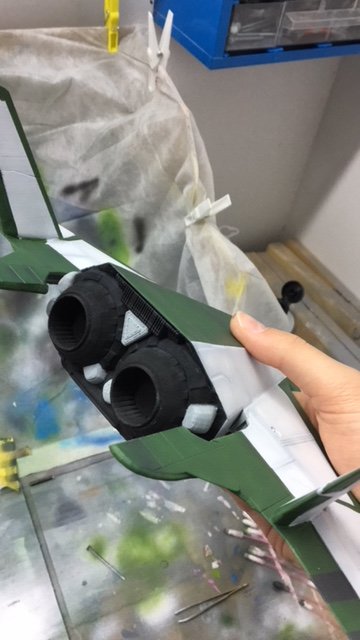 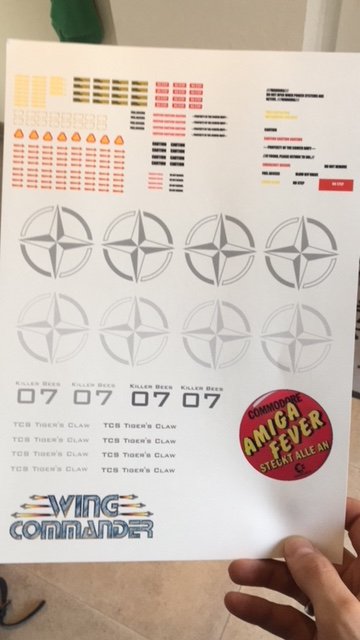 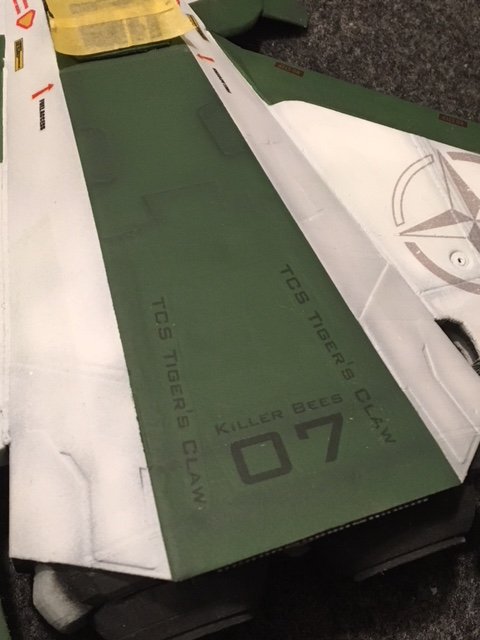 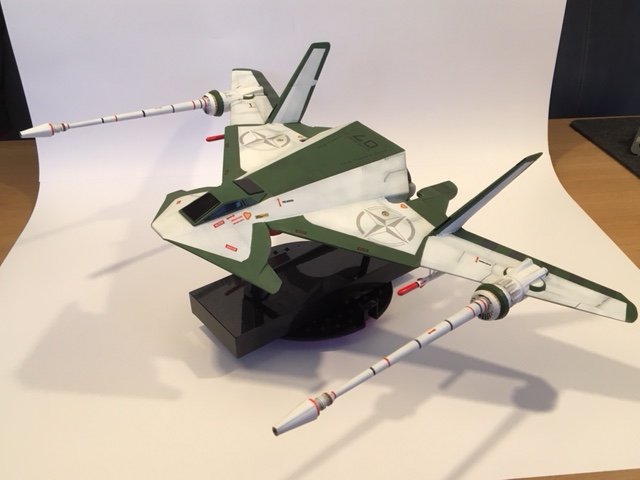 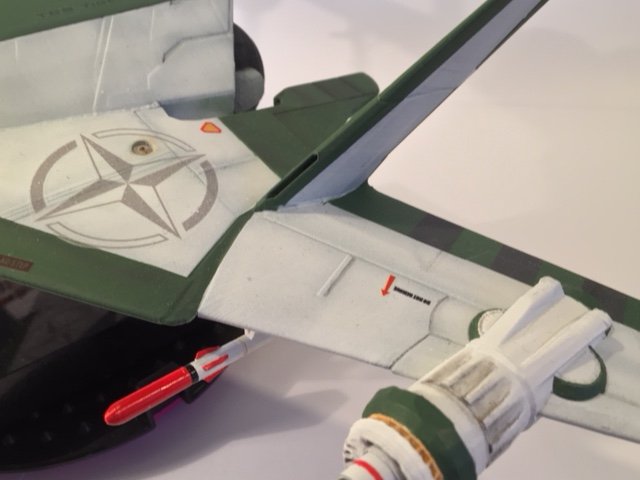 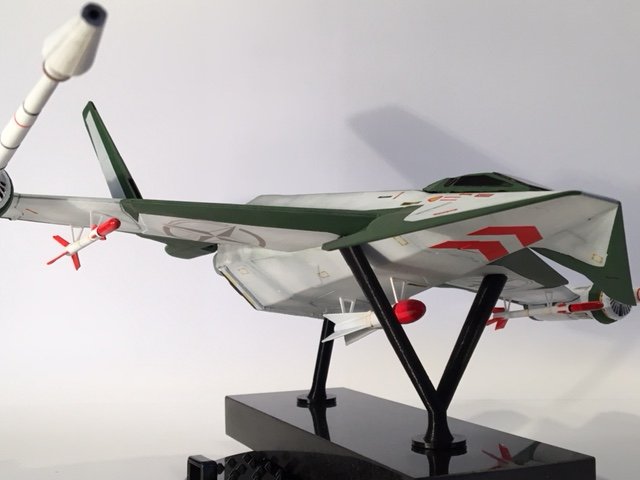 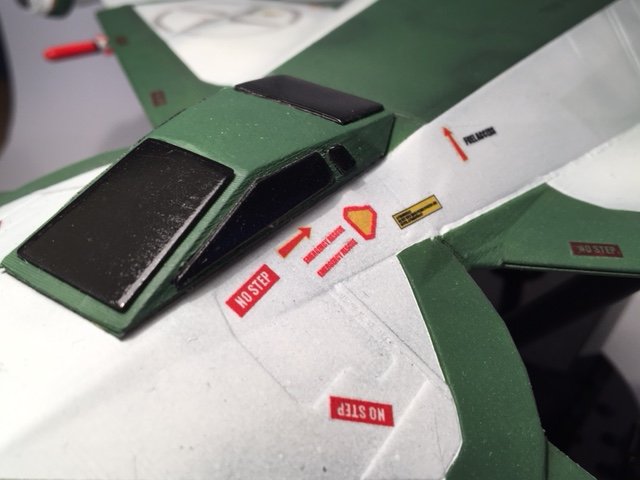 that's great! And thanks for the quick tutorial. I think there's alot of interest in taking existing assets and making physical models from them.

Pretty awesome! I like the paint job too and the base.
The first space ship I ever flew in my life. But it's not the one I recall, the Killer Bees insignia is missing!

Holy Crap, the Hornet has never looked so good

Looking good! Next step: 3D print the interior of the cockpit along with the pilot, so that you can dispense with the black glass

Quarto said:
Looking good! Next step: 3D print the interior of the cockpit along with the pilot, so that you can dispense with the black glass

And the ship's mascot cat that jumped in the cockpit just before take-off. That mission redefined the meaning of "furball".

Oh, I should add one more thing. Looking at that Hornet, I'm seeing a rather peculiar kind of schizophrenia

. On the one hand, you're sticking with the classic WC1 paintjob. But on the other hand, you've changed the Confed markings to modern (well, by our standards

That was my call, Quarto - in the original 3dsMax model that I released. Take yer objections up with me.

Hendrik's done a *fantastic* job of turning that old 3d model into reality. I'm super stoked to see it, and the only thing that would make it better is to see it all lit up.

You've made my life, or at least save me enormous time be showing me these tools. I've been fumbling through repairing models manually :-?
Cheers, Jonsguide.org
Last edited: Apr 20, 2018

Was just seeing this today. This looks like one of the best 3D prints, I have seen so far. It's a bit hard to tell, though, how much sanding was involved to get the surfaces as smooth as they look on the tiny pictures. Really great paintjob as well.
You must log in or register to reply here.
Share:
Twitter Reddit Pinterest Tumblr WhatsApp Email Share Link
Top