I don't think I have the spare brain bandwidth and the moment to help with the number analysis, but I can contribute something to the letters.

Not trying to just nitpick here, but the thing has enough errors to be distracting.

"VokToth" isn't the fighter's name. It should be "Vaktoth" with an a and no capitalized middle letters. I'd have assumed it was just a typo, but I see your spelling was used consistently in several places, so it seemed like I should point that out. There's also some funky punctuation: the turret covers "its" rear, not "it's," and there should be no comma before "and mounts 2 Meson Guns" since that is inserting a break in a series of things where there should be none. The phrasing of "different ship to the pilot" is odd and would be better as something like "different ship than the pilot." There's also missing/extra spaces here and there.
Last edited: Oct 19, 2019
W

Not sure if these are any use... I made these back in 2004!! In case people want to print off ship counters before the minis are ready..

In case anyone needs some inspiration, I suggest taking a look at Two Hour Wargames' 5150 Fighter Command ruleset, reviewed here:

I loved the PC game Wing Commander and I played all its sequels. I loved it so much that since then I wondered about the possibility of play...

javieratwar.blogspot.com
It's main gameplay basically IS your typical Wing Commander mission, and it has rules for asteroids, minefields, and missiles.
It seems like this particular rulebook is no longer available from Two Hour Wargames directly, but I'm sure you will find it elsewhere.
BTW, Studio Berstrom manufactures these nice WC miniature ships: 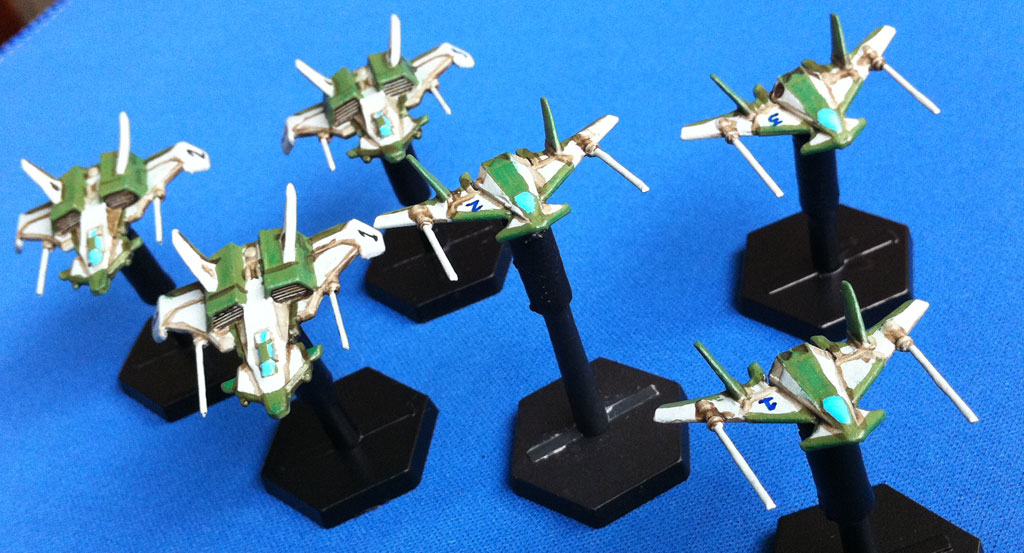 It's been almost a year and a half since I was able to put any serious effort into the table-top game. See when the pandemic started, I was just moving into serious playtesting the Star Fighter tabletop game. And that curb-stomped my play-testing efforts. It's kind of hard to play-test a table-top game when there's a pandemic and everything. My situation was further compounded by several other things that came to a head at about the same time. So with all of that, I put work on the game on the shelf for the time being. I was looking at my notes for it and I wanted to find a way to facilitate play-testing and development. So with a little looking, I'm gonna use Table-top simulator for playtesting and development. Once I do some review and re-write some of the basic rules, I'll be looking for people who have TTS and want to do some play testing on it. So keep an eye open if you're interested. 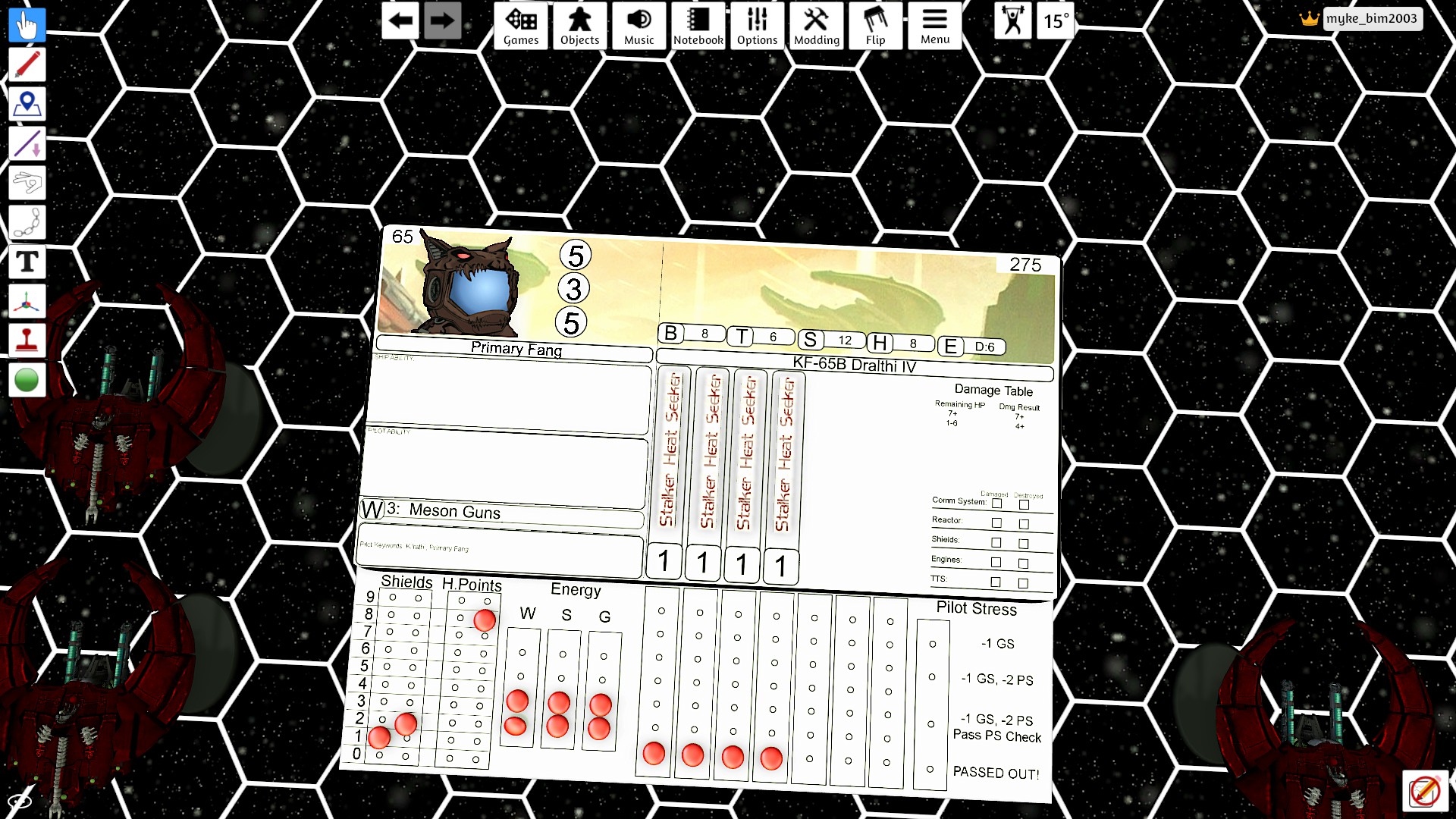 Right now I'm just using random models from other asset packages as fighter-stand ins, but I'm talking to Defiance about working something out. 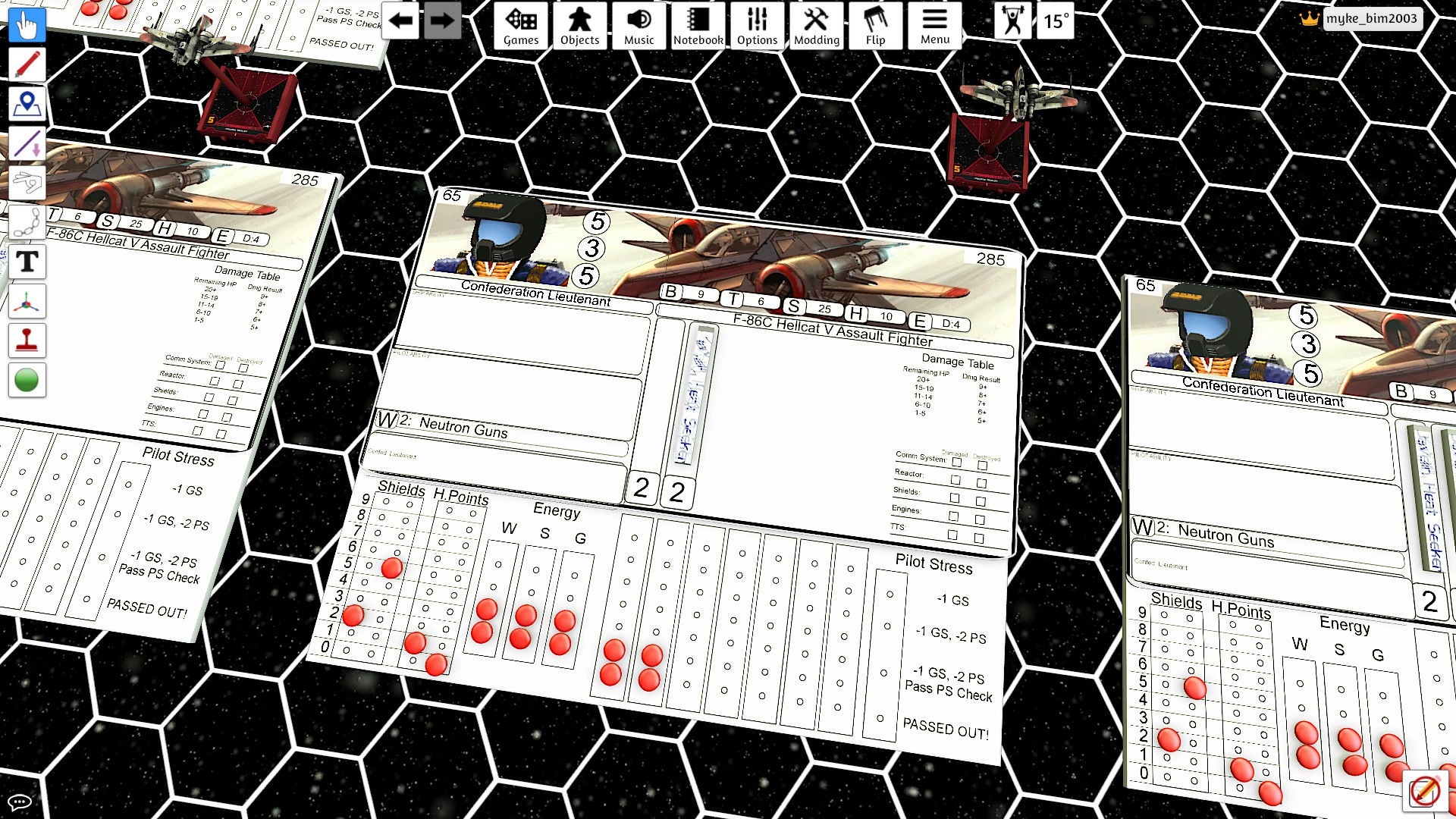 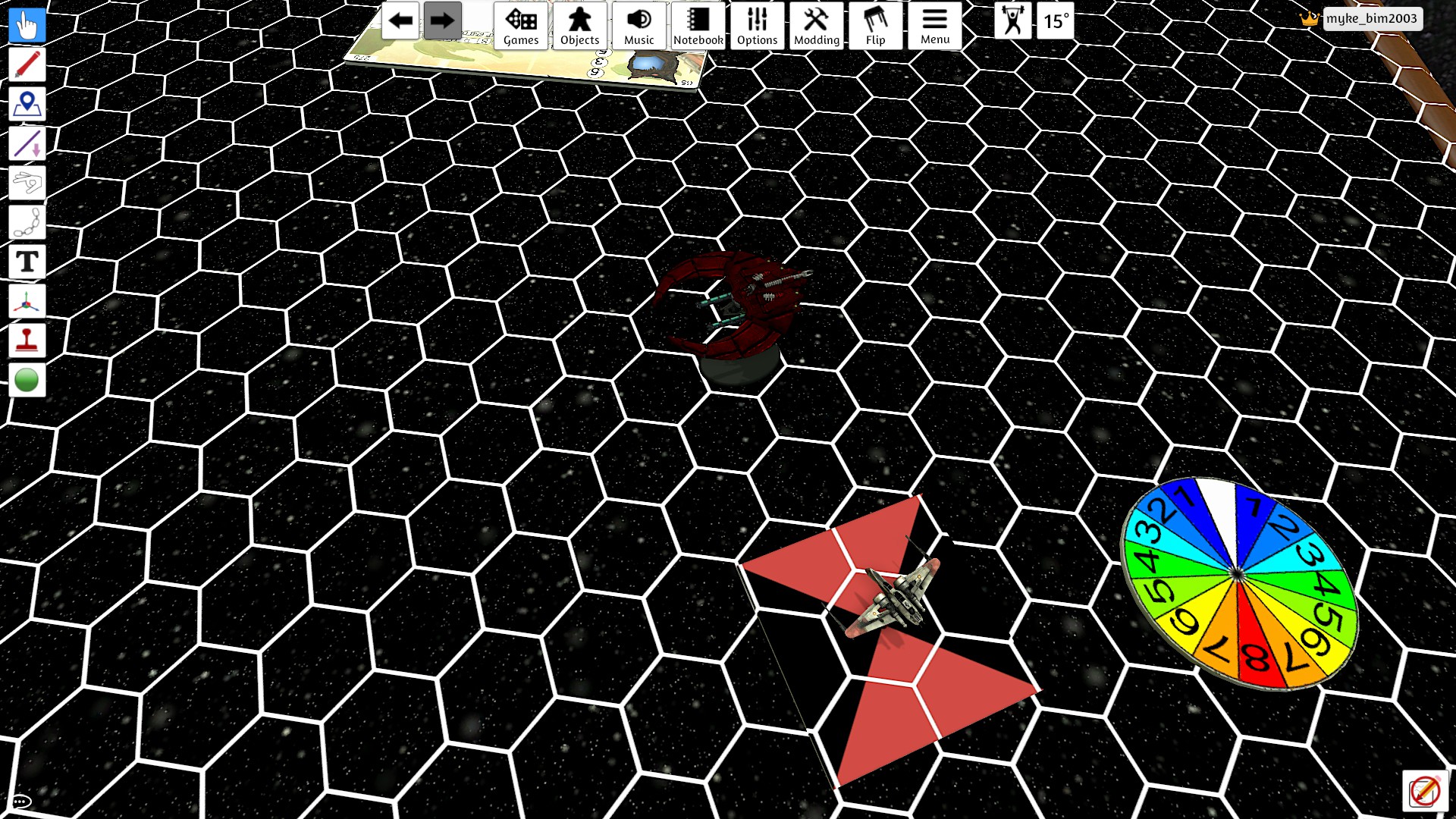 I finished assembling an excel file where I can feed the stats for the pilots, fighters, and cannons into it, and assign a weight to each stat that is then used to calculate the cost of the fighter (Basically it's (weight*each stat)+(weight*cannons)+(weight*# of missiles/torpedoes)). Interestingly, I feel like the formula works well for fighters under 300 points (Like the Hornet, HellCat, Darket and Dralthi) but doesn't seem to scale up like I figure it should beyond that point. The Excalibur coming in at only 50% greater than the Hellcat seems off. I would figure the Excalibur would be 2-3x the cost of the Hellcat, while the Lance would be 4-5x the Hellcat. The Devastator and Longbow seem somewhat more in range of what I would expect... though I'm not 100% sure about the Longbow being the more expensive of the two. 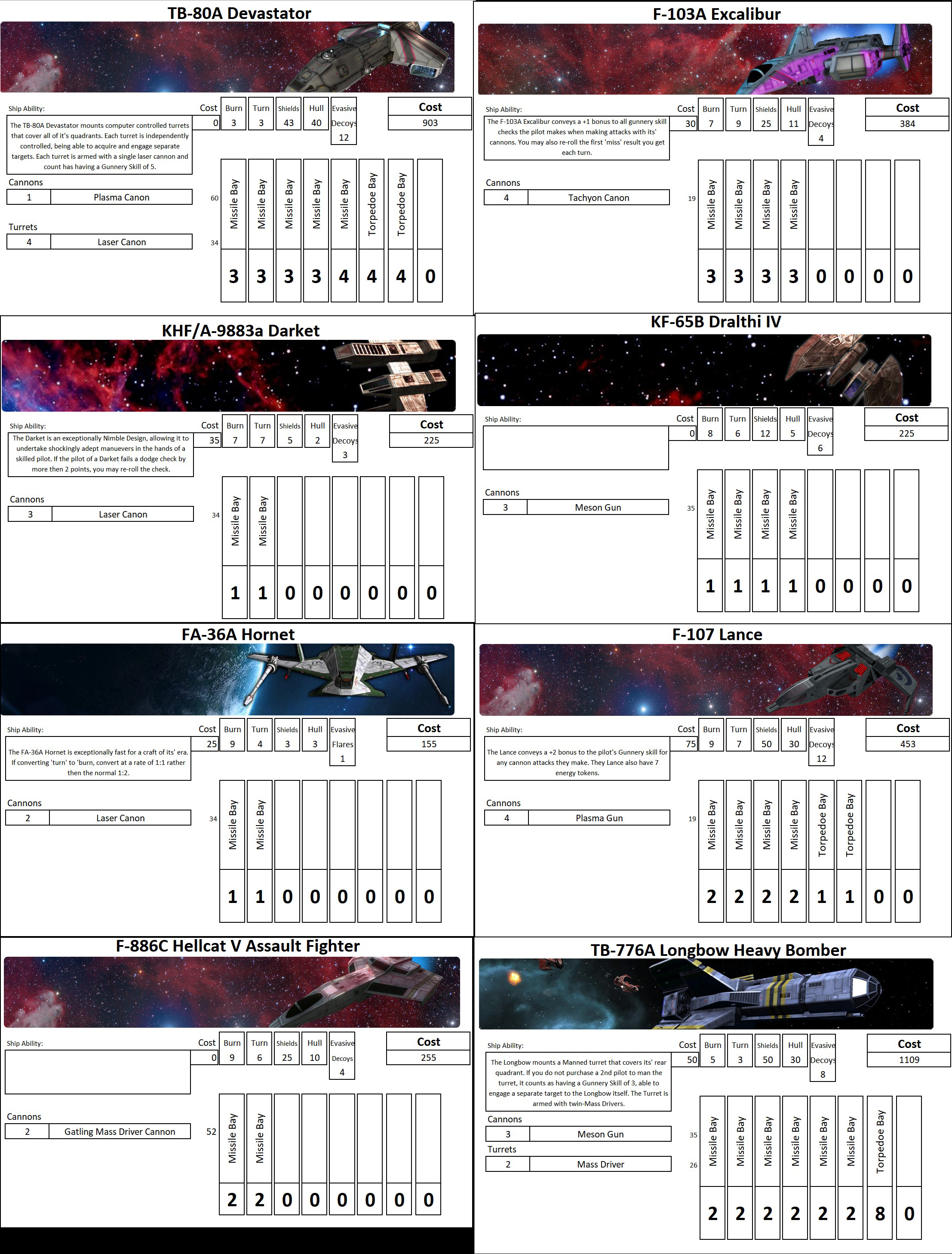 While for cannons, I'm presenting using the following system:
(Damage**2)+(Range-engagement distance * 1.25)+(Calculation of effect, see below) + (# of shots *2) + Cost of special ability.

The 'calculation of effect is a bit hard to spell out with the spreadsheet in front of you to reference.

If the effect is a bonus to the targets dodge, take the amount of the change, multiply it by four, multiply that value by the number of shots, then multiple that by .75 and then subtract that value from the cost of the cannon.

If the effect is a bonus to a reduction in the shooter's "to-hit" chances, take the number of the change, multiply it by .75 and subtract that from the cost.

This is the sort of thing I much prefer having something like excel to do the work in. This way I can change values and not need to review the formula I'm using unless I want to change that.

For any who are interested, I threw together a brief introduction and explanation of the stats for my game:


I'm gonna try and build other videos that explain the other rules, but you know, time and all.

Will this game be playable against the AI too?

I won't say 'no' to that question, but I'm not going to say that that capability is a priority either.

Also, I was unaware that TTS had an AI system that you could play against.

So I'm working on tweaking weapon stats for the game. I'm looking at the cost... and I'm kind of torn regarding the Plasma Cannon.

Some break down of the stats for the weapons and what they mean:
[D]mg: the damage the weapon inflicts per shot landed.
[R]ng: The maximum range of the weapons.
[E]-distance: the engagement distance of the weapon. This is the maximum range that the weapon is regarded as maintaining its effectiveness. Beyond this distance, up to its [R]ng, the weapon suffers some sort of negative effect.
Effect: What effect the weapon suffers if shot at a target beyond its E-distance.
[S ] hots: How many shots the cannon makes per attack.
[SP]ecial: any special effects the canon has.

Calculating the cost of the weapon:

I know that sounds convoluted. I have the entire thing built into a spreadsheet so it does the calculations for me.

The cost is where I'm running into a bit of a question. Nominally, the higher the price of the cannon the more effective it is at destroying enemies. So the Plasma Cannon... It is by a wide range, the single most damaging weapon per shot in the game presently, having 30 damage per shot. That is 3x the damage of the next most damage per shot in the game. It has an above-average range of 12, and a comparable E-distance of 6. while it has above average range. The Plasma Cannon's effect is that the target gets a +2 to its dodge. So if you fire the Plasma cannon at a target that is further than 6 inches but less than 12 inches away, the target gains a +2 to its dodge efforts. using the current calculation for cost, the Plasma cannon comes in at 17.7 points.

Compare that to the Meson gun. It has damage 6 (1/5 of the Plasma cannon), but also has the 2nd longest overall range in the game while having the longest engagement distance in the game. It also gets two shots. However, its effect gives +1 to the target dodge and -1 to its own damage. Though its e-distance is only -6" from its range, while most weapons' E-distance is 1/2 the range. The Meson Gun also has a special rule called Particle Onslaught. This causes shots that hit a target's shields to inflict 1/2 the damage it would otherwise, but shots that hit a target's hull inflict 2x the damage it would normally. So if you can hit a target with its shields down, the Meson is going to do a lot of damage (of course, "lot of damage" IS what the Plasma cannon does... just period). Sticking these stats through the calculation gives the Meson Gun a price of 18.6 points, .9 points more than the Plasma Cannon.

So... yeah, I'm not sure that the Plasma canon should be the most expensive canon... but I'm not convinced that it shouldn't be either. Does anyone else have any input on this topic? Just to be clear, my concern isn't explicitly about the Plasma cannon versus the Meson gun but rather I'm using that comparison to question whether or not I've got the price calculations setup properly. Should raw damage count for more? Should the number of shots be a multiplier or a modifier in the calculation? Should I look closer at the cost of the effects and specials? Etc.

Just to shortlist the differences between the Plasma Cannon and Meson Gun: 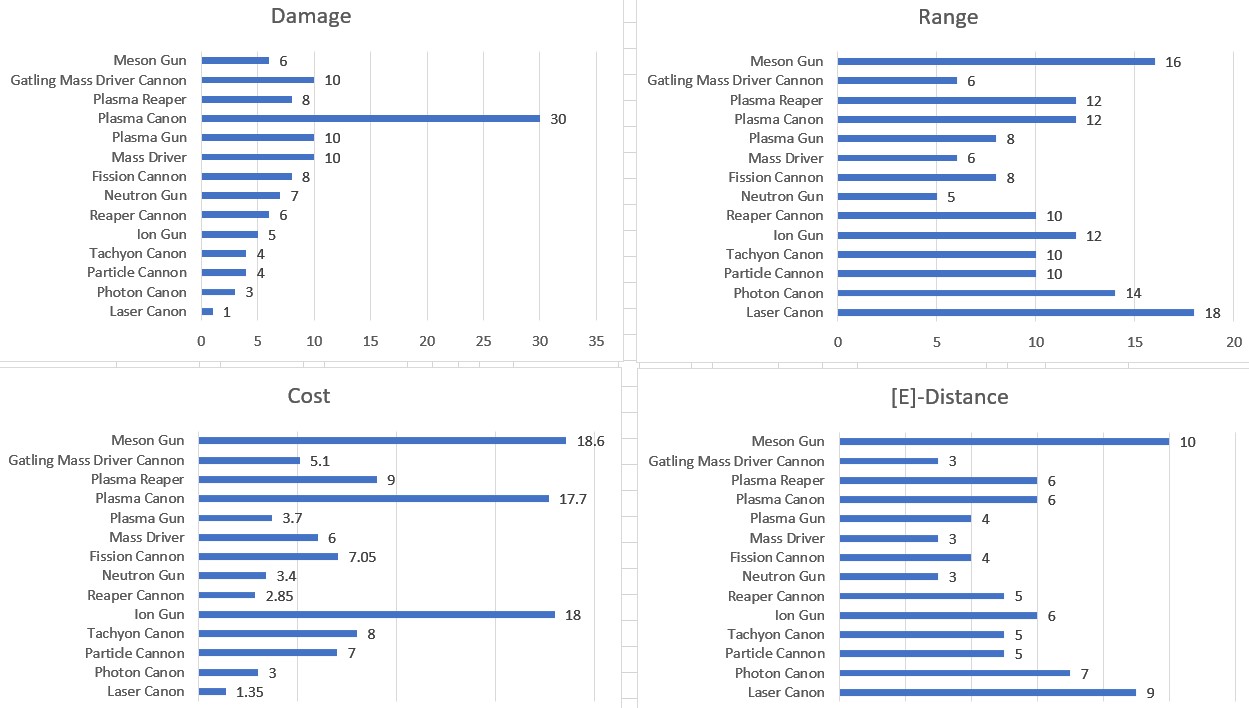