I've been playing through WC3 and keeping track of my kills and I noticed that capital ship kills don't seem to count on the kill board. The most noticeable example was Tamayo 2. The number of kills I got matched with the number of fighters, but I had to have gotten at least a few of the 4 transports at the end, but it seems they just didn't count. A few other examples the total number of kills of me+wingman equals the number of fighters, but no one was credited with the cap ship. I was wondering if anyone else noticed this.

This is accurate, capital ship kills are taillied separately and not actually displayed on the kill board in WC3.
B

Thanks. Another random thing I noticed was how the names are listed in the kill board. At first it didn't make much sense to me (and I liked how in WC1 the names were ranked by number of kills). Then I noticed that the callsigns are listed, but they are ordered alphabetically by last name (Buckley, Chang, Dillon, etc.) Blair is listed last (probably for the benefit of the player) and I guess they alphabetize Hobbes either by his callsign or using "Hhallas". 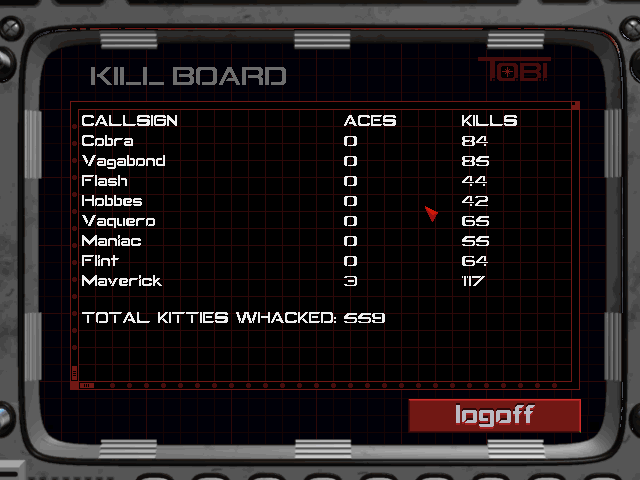