gr1mre4per has taken the Vision Engine to new heights yet again for his Prophecy Unlimited project. Now that many of the constraints on individual ships have been lifted, he's moved on to hacking the engine to allow for vast numerous of objects at one time. The screenshot below shows off hundreds of dogfighting fighters - check out that radar display! Work has also been done on customization of how weapons fire. He's been able to modify the gun performance so that they can fire out-of-sync like they sometimes do in previous WC games. It's great that even more options are now being offered to aspiring modders! 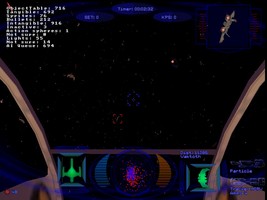 Right, once again I've been held up, but this time by one of my previous fixes in wcpunl needing extra work. I was hitting a crash every time I reached a certain number of ships, about 200, and I couldn't track it down. Luckily I have finally nailed it down and along the way have found other limits that needed increasing to get to where I am now and learned a lot more about how the game initializes and runs. I finally feel satisfied I can show it off. I've added 800 ships so far without a crash, although beyond 500 starts causing high load and low frame-rates. I might see if I can add more efficiency later. Here is a sneak peek with some debug I added using the games own message system.

Laser turrets can now fire each barrel separately (WC3 style). The order the barrels fire depends on the loading order of the hardpoints on the barrel mesh.