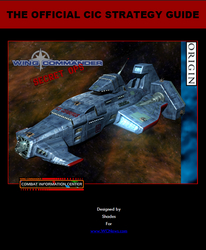 Just when you think the birthday fun is over there's more presents! Longtime Secret Ops aficionado Shades has some updates to his Wing Commander works.

Like all of you I am a huge fan of Wing Commander and have been since the first game. One of the things I loved most about it was its branching story and like many of you I played it many times just to follow the many story branches. Many year ago I decided to flowchart the script/story of the Wing Commander games, something that could be read in a "Choose your own adventure" style. My first public release was for Wing Commander II. It was rough but still felt lacking. With my current scripts I've changed the layout and added more picture to help bring more of the feel of the game to the story. It's not done yet but I wanted to release it for the Birthday party. Constructive feedback is welcome. The guides are not 100% tested and I would greatly appreciate any help in testing them.

WC Secret Ops has always had a special in my heart. Years ago I released an ICIS and Strategy guide for Secret Ops. I have redone both. The Cerberus ICIS is now very close to the Midway ICIS with a few tweaks. The Strategy guide had been updated to more closely match Prima's WC Prophecy guide. I've tried to upgrade the graphics throughout the guide. I've updated the maps to 3DFx version of the maps. I've made corrections throughout the guide including the release dates. Often going through the SO backup disk I found a document with all the pilots biography, many are different from what was in Prima's Prophecy guide. I have added those biographies and in some cases merged them with known ones from Prima's Prophecy guide. Also keen eyes will note the ISBN barcode on the back is the one that Prima's WC Prophecy Gold guide would have used.

I hope you enjoy these books. Constructive feedback is always welcome.