The Rocketeer dropped in to share the Wing Commander ships he's currently building for Space Engineers, a game available on Steam Early Access. He's already got the classic Wing Commander basics down: a Tiger's Claw and a Venture square off against a Fralthi in the pics below. The carrier has a wing of Hornets, Scimitars, Raptors and Rapiers ready to go, plus a handful of Kilrathi ships have also been built. See how they move up and down on the hangar bay service elevator below. This can all be found in the Steam Workshop under the name "Wing Commander 1:1'. You can also let The Rocketeer know what you think over at the CIC Forums. 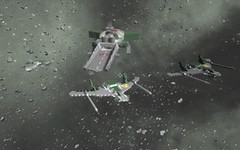 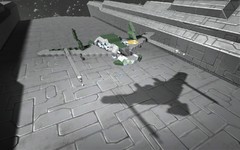 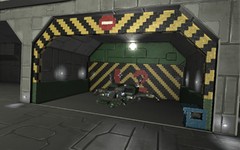 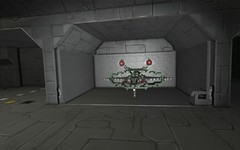 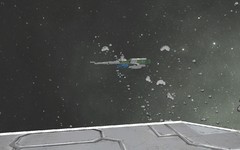 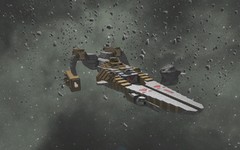 I used the sketches from Joan's Fighting Spacecraft in Claw Marks from WC1 and basically measured everything out (large blocks are 2.5m^2, small blocks are 0.5m^2, so they're actually full size in-game. I did hit a slight problem with the relative size of the fighters though, as I think has been discussed in the past. To fit a Raptor out of the launch tubes, I had to make some modifications to the mid-ship wings compared with the original drawing, and with the best will in the world this 'Claw with these fighters is only ever going to have 2 launch tubes. I think I could just about squeeze in 104 fighters, but at these scales the ship would be basically unworkable and all other ship functions would be relegated to the aft wings, super- and sub-structures.

The same problem also applies to the Kilrathi ships, as the canon Fralthi is supposed to house 20 fighters - I managed to squeeze them in (just - 6 Krant, 6 Gratha and 8 Salthi) but only by using some creative thinking. I am considering rescaling the fighters but they'll lose a lot of detail in the process :-(

If anyone has alternative / better scaled statistics for the size of the WC1 fighters (Kilrathi and Terran) I'd be very interested in those. I've already applied the 19:24 resize of the Rapier from WC2 to all the fighter craft and the size is still pretty bonkers.