To All Those Who Have Served 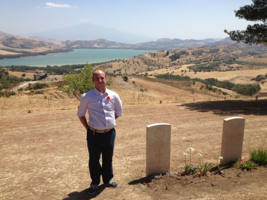 The Wing Commander Combat Information Center extends a huge heartfelt thanks to all those who serve in uniform around the globe. We hope you are safe this Veterans' Day and that you enjoy the freedom you have helped secure. Also, make sure to take a moment today to remember those who gave the last full measure of devotion in the line of duty. They may not be with us this day, but they are not forgotten.

This summer, I had the honor and privilege to be part of a staff ride of the Sicilian Campaign during the Second World War. On the last day of the trip, we stopped at the Canadian War Cemetery just outside Agira for a 70th Anniversary memorial event. The picture accompanying this post is of me near the grave of the soldier I accounted for in roll call during the memorial ceremony. In the background you can see the famous Mount Etna which watches over the fallen.


At the 11th hour, of the 11th day, of the 11th month, in 1918, the First World War came to an end when the Armistice between the Allied Powers and Germany went into effect. After four years of the most devastating war in human history to that time, the people of all nations involved tried to comprehend the level of loss that had been inflicted on an entire generation. The British Commonwealth and the United States declared November 11, in 1919, a public holiday to recognize the sacrifices made during the First World War. “Armistice Day” became a yearly remembrance by both nations and eventually other powers. In 1954, following the Korean War, the United States changed the name of the holiday to “Veterans Day” and made it a remembrance of all America’s veterans. The British Commonwealth now recognizes November 11 as “Remembrance Day.” Many people wear a red poppy, a symbol of the day inspired by the red poppies that appeared across battlefields in Flanders.


In Flanders fields the poppies blow
Between the crosses, row on row,
That mark our place; and in the sky
The larks, still bravely singing, fly
Scarce heard amid the guns below.