Crusader: No Remorse features a character named Senator Everette Snell (played by Ron Jackson), a powerful, corrupt politician who answers to Chairman Draygan. Without spoiling the story for new players, he plays an important role as No Remorse develops. 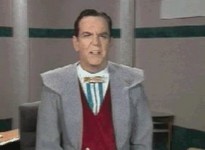 ... but four years earlier, Wing Commander II featured a cameo from a General Snell! As Blair leaves Niven to return to the Concordia, you have this exchange:

Niven: The course in your Nav computer takes you back to the Concordia, but General Snell’s got a job for you to do on the way.
Maverick: Roger that, Niven. What’s up?
Niven: You’ll escort the Bhomis and the Excalibur to their jump point. After they jump out, proceed to the Concordia by your programmed route.

So who the heck is this guy? Origin Systems' Vice President of Product Development Dallas Snell! Mr. Snell executive produced both the Wing Commander and Ultima series in their heyday. It is known that the Dallas system on the Wing Commander Universe map is also a namesake, referencing a piece of company lore which involved his drawing an org chart that was his own name pointing back to itself. It's also believed that he was namesake for both pilots named "Dallas", in Wing Commander II and Prophecy. He also appears twice in the Ultima series: first as "Dallas Garrett," Tesla's body guard in Martian Dreams and then as "Le Snel," a librarian with a terrible secret in Ultima VII.

Today, Mr. Snell (far right in the photo) is a co-founder of Portalarium, the social gaming company that is returning Richard Garriott to gaming! It's very exciting to see that former Origin luminaries will be once again creating worlds... 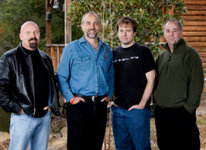