It's a Man's Enigma Sector

Alexander Bevier, a journalist covering the LOGIN 2011 conference live-tweeted a seminar on the portrayal of women in games... and in the process provided a fascinating anecdote from Crusade, Wing Commander II and Freedom Flight writer Ellen Beeman (then Ellen Guon):

Beeman talks about working on Wing Commander back in the day. She claims that she could reskin the character to female in 30 minutes.
8:22 PM May 17th via web

It would be a hard sell for women to take interest in a flight sim, but today, she believes that there's a good niche for women playing.
8:23 PM May 17th via web

Very interesting! It really wouldn't be difficult to swap the Blair and Angel talking heads in Wing Commander II--and very little of the dialogue would need to be modified. Would you have played a Wing Commander with a female lead?

Flashpoint has posted a minor progress update on his WC1 campaign editor program. He's recently completed the application's 'code plan' and redesigned the main screen (pictured below). This should allow users to arrange more information in a more efficient way in the next update.

Much more ordered and it uses space much better, allowing me to have more info on screen at once. The ship slots are in one column on the right. The main screen will hold visuals like the nav map and the briefing screens. The big gap on the right will hold specific control layouts for editing campaigns, navs, ship data and briefings. An example of this is the screen below... So there you go. Not much, but something. 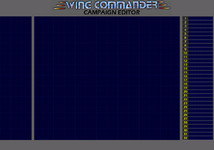