The Javascript layer development phase of Wing Commander TacOps online is now complete. Avacar has set up a sample page of what a simulated game might look like in the 'engine' here (may not work in Internet Explorer). Ironduke has also updated his wish list of graphical elements. All current TacOps ships have been converted for the software-based game, but craft like Free Trader, Venture, Talon, Gothri or Tarsus (in the TacOps art style) would be much appreciated. 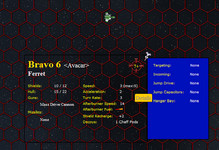 Everything else is a nice bonus. Also, I haven't listed ships like the Arrow or Scimitar, for instance. That doesn't mean I wouldn't want those in WCTO - if you want to contribute anything at all, feel free! The only prerequisite being that it should match the existing art style. (And while I'm dreaming: I'd also love some civilian ships from Howie's Pioneer project... )

The UO Herald was excited to announce last week that Ultima Online is being honored as the first inductee to the GDC Online Hall of Fame. A formal award ceremony is being held October 7. The award acknowledges UO's Origin legacy and its contribution to the massively multiplayer genre as a whole over the last fourteen years. Some of the developers who will be accepting the award also worked on various Wing Commander Online prototypes. Congratulations!

Choice Online Awards organizers have also announced that Electronic Arts' Ultima Online, the Origin-created game that is now the longest continually running massively multiplayer online game in history, will be honored with the first ever Hall of Fame award for online games.

The persistent world installment for the seminal Ultima game franchise, which launched on September 25th, 1997, has now been operating for almost 14 years - and was a key part of the wave of late 1990s subscription-based MMOs which brought the genre to much wider attention.

Some of Ultima Online's most important features included in-game events affecting the entire lore of the world, and progressive features for their time such as item crafting and persistent player housing. Continued upgrades of in-game content and even the game engine have helped to keep the game fresh for players, some of which have subscribed continuously for over a decade.

In honor of the game's induction, the Hall of Fame award will be accepted on stage by key members of Ultima Online's original development team: Rich Vogel, Launch Producer, Starr Long, Director, and Raph Koster, Lead Designer. Joining them will be Eugene Evans, GM of BioWare Mythic, the current home of Ultima Online within Electronic Arts, who will introduce key team members from the game's development history.

In celebration GDC Online will present a special lecture, 'Then and Now: Ultima Online Over Time'. The lecture will be co-presented by Rich Vogel, currently at BioWare Austin and the original producer of Ultima Online, and Calvin Crowner, the current Ultima Online game producer. The duo will talk about the history of the title, contrast their work on the game throughout its history, and provide anecdotes and specific takeaway from many years of work.