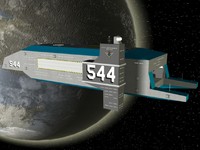 Happy first birthday to Frontier - Prelude to Darkness! The project turned a year old last week. lew82 has been pumping out regular updates and new episodes so steadily that it seems even longer. The weekly ship/character of the week feature has started up again with new items being posted about every Tuesday. One of the latest updates is about this slick looking carrier.

Pre-production has been the order of the day this week, with the loyal voice actors going over their scripts and sending me their lines, then possibly redoing them again in different ways – thanks guys for all your efforts, you know who you are.

The Norwegian site Gamer.no has posted a nice mention of Wing Commander 1's upcoming 20th birthday. The actual ship date anniversary comes next month on September 26, but we're happy to celebrate all summer long! Check out their post here.

...Wing Commander featured a dynamic campaign that changed the character based on your performance, and it was not at all certain it ended with victory for humanity. In fact, it could be pretty bad, but it did not mean "game over". Instead, you will experience a different (and much more depressing) story and very different missions.

But this was not the only area where the Wing Commander was ahead of its time. It was able to also boast intense, animated sequences and an incredible atmosphere outside of missions, thanks to dialogue with other pilots (a bit like we have between missions in Starcraft II) and brilliant briefing-sekvnenser.

So what are you waiting for? Carrier Tiger's Claw has room for a new pilot, and humanity needs you.