JasonRocZ has a pair of exotic Nephilim craft today. Both the "Puffer" and "Tarpon" were revealed in Star*Soldier via the plane spotting silhouette guide and will make an appearance in the Wing Commander Collateral Damage mod. He's still working to figure out what roles each ship will fill, and there's some structural and weapon enhancements that will be added to the latter ship. 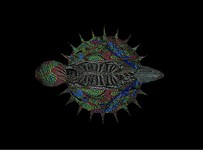 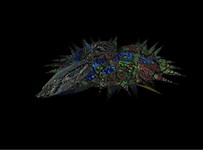 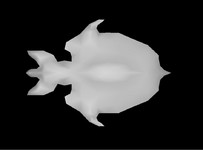 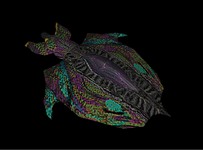 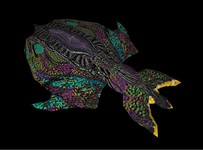 I started on the Tarpon... Let me know what you think so far. It tips the scales at the moment at a whole 415 polys.

The guns haven't been added yet. I was thinking that also the Puffer needs some guns added. At the moment the Puffer is some kind of missile boat. The Tarpon I was thinking on being some kind of extremely fast fighter, heavily armed but not armed heavily in the weapons area. To be honest it's so much easier to make a crazy looking ship than something that is uniform for some reason. The textures will look similar to some other Nephilim fighters a little different but similar

Raptors to the Rescue

You might know February 2 as Groundhog's Day, but it's also the anniversary of the famous engagement that helped Confed draw a defensive line through the Vega Sector. On this day in 2639, the Kilrathi swept into the Enyo and McAuliffe Systems and captured a quarter of a million human colonists. Through the heroic efforts of Confed pilots, including Captain Geoffrey Tolwyn, the Terran fleet was able to successfully rescue the hostages and drive back the Kilrathi!

2639.033 - Kilrathi forces occupy McAuliffe and take a quarter of a million humans hostage under orbital guns. The Confederation attempts an attack, made difficult by the presence of hostages. The Confederation deploys an attack force consisting mainly of Raptor class fighters equipped with Porcupine mines. The Raptors drop their mines in a region of space near a main jump point. This forces the Kilrathi to avoid the area. While the Kilrathi concentrate on destroying the Raptors, a radio signal detonates all of the mines allowing the Terran fleet to jump in-system. The Terran fleet smashes the orbital guns and enemy ships with minimal loss of life to the colonists. The Kilrathi are forced to retreat, however losses on both sides are about equal.