Here's the early Dralthi IX rendering seen in the last update testing the afterburner effect. The overhead shot is impressive - it seems to be a bit 'longer' than either the classic or the finished Dralthi. 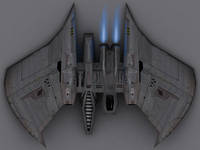