Just a plain and simple Dralthi IX? As similar as it looks to the finished version, it's interesting to find differences. For example, the gun mounts have been redesigned... and wings are missing many of their distinctive Kilrathi markings! Our next two installments will show you an even earlier Dralthi to compare this to. 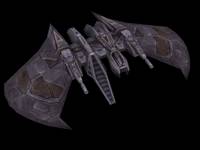