Wolf Dog was recently hunting for Wing Commander news on the G4 video game network. In an episode of Attack of the Show, a Hellcat V was featured with a variety of video game origami on on display. They were promoting Pepakura which lets modelers import preexisting 3D models and turn them into paper art. Pepakura was the neat program used to design the Wing Commander Paper Models.

Be the envy of your fellow cube slaves when you decorate your work space with a shockingly cool paper model you can build yourself. Just download and print the diagrams, spend many hours putting them together, and voila: paper-craft models that will amaze your friends.

Other cool models can be found at the Pepakura site. The program costs $38 if any talented Wing Commander modelers want to get into the arts & crafts business.

At the CIC we follow a lot of traditions and are generally resistant to change. Occasionally there is talk of refreshing the layout and graphics of the site, but we really like the current look of things. The most prominent graphic is our site logo, which we are extremely attached to. Keen-eyed visitors might have noticed that the background of our logo is an actual screenshot from Wing Commander 4. Recently AD was able to help us pinpoint the original scene in the DVD version, and we've integrated that into our design. In this process we've managed to retain the same logo and its roots as a Wing Commander screenshot while sharpening it up quite a bit. You can see the comparison here. The little red ship is actually a Pirate Frigate and the blue bits are a Longbow and Arrow. The green is part of an asteroid. 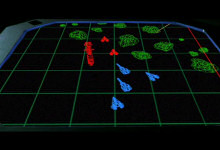 AD has prepared a 17 meg divx video clip of the briefing that our logo originated from, and BradMick has created a high resolution avi wireframe render of the scene.