Put A Galaxy In Your Space Combat

When we mentioned a couple of weeks ago that Overmortal had been able to add ships in to the X-Plane Space Combat game, it was only a matter of time before someone made a WC ship for the game. Well, Aradayn is that person, and he made this model of a Galaxy.

I noticed your mention of 'Space Combat' on the news site and I thought I'd share the Wing Commander ship I made for that game - a model of the Galaxy class merchant ship from Wing Commander- Privateer. 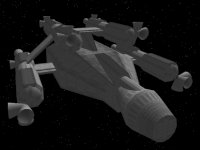 You can download the file for use in the game here.

Our latest poll asks which next generation console you'd most like to play a Wing Commander game on. Each kind of system has its own merits, and it's a tough choice. A couple of years ago we did a similar poll based on current systems, but since development on those systems will slowly be phased out now and with release of at least one new console rumored to be this year, we figured a new poll would be timely. It'll also be interesting to see how opinions have changed over time. You could also click the Discuss link below and mention your reasons for supporting your system of choice.