Kit Vulpes wanted to let everyone know about another forum based Wing Commander role playing game that's been conducting business for quite a while under the radar. They've managed to keep things together for a couple years already and are now looking for new members. There are some creative people involved who have created a new alien race and combined it with a unique Wing Commander setting.

The year is 2653. The Terran Confederation and its allies are at war with the Kilrathi Empire. In the thick of the action is a cruiser named TCS Equinox. Assigned to this ship is a fighter/bomber squadron called "the Black Eagles." The Equinox is a "last chance" ship. That means the Equinox is the last stop for Confed military personnel before court martial or (since it's a time of war) execution. Consequently, the ship, crew and squadron are considered expendable. They usually get the suicide missions.

Our Wing Commander is totally nuts; the head trauma nurse is a real fox (No...seriously...she looks like a fox); Winter and Shadow's tech crews are constantly cleaning organic debris off of their figthers (again); the XO has pointy ears (and she looks like a fox, too!); the plot is somewhere between sci-fi space combat, bad horror movie, and melodramatic daytime television; and the bar is always open (except when we're on red alert, then it *gasp!* doesn't do deliveries).

If you seem incapable of producing roleplaying characters who are well-balanced, productive members of society, this may be the RPG group for you! We are the intrepid (or maybe just plain loony) pilots of the TCS Equinox, a last-chance stop for screw-ups who for whatever reason couldn't quite make it elsewhere. We meet on Sunday nights at 9pm EST for chat-based roleplaying and fill in on the message boards in between.

You can join in at their site or email Kit Vulpes for more information.

If you missed the live webcast in #Wingnut, you might have missed the news about Mars being covered in a salty sea. After having announced some weeks ago that certain rocks on Mars had touched water, their latest findings confirm that the rocks were formed under a sea on the Mars surface. Along with other evidence, this makes the Opportunity rover landing site one of the most likely candidate locations for past life fossil formation. You can find out more on this mission (as well as other information including news of potential tenth planet and a the new orbiter) at the official Nasa site. 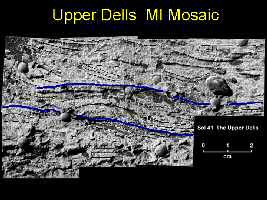 This magnified view from NASA's Mars Exploration Rover Opportunity of a portion of a martian rock called "Upper Dells" shows fine layers (laminae) that are truncated, discordant and at angles to each other. Interpretive black lines trace cross-lamination that indicates the sediments that formed the rock were laid down in flowing water.