Good luck with the missions.

And now for another big batch of screenshots, showing off lots of capships, lots of firepower, and lots of explosions.

Sorry for not keeping this thread up-to-date, but I've posted another Developer Diary entry on HLP, showing off improved textures for the WCHF fighters (including green versions), and a re-turreted Exeter.

Read it here (Note: A recent update to the HLP forums broke post anchors on Firefox... You may need to scroll down a little.)

Here are the pictures that I posted on HLP:

Also, a new website for Wing Commander: Hostile Frontier is in the works.

That's excellent. After a project reaches a certain point, I think all of them need a website (or at a bare minimum, a facebook page or something) to organize information and communication to fans the intent and status of the project. That's a pretty sharp looking website too.

@ kevin: have you got screenshots from the enhanced nebulas for secret ops?
Q

I somehow stumbled across this while looking for cool music to assist me with DMing.

I have no idea what exactly I am looking at (although I did recognize all of the ship images so far) but I just want to let you know that you've made my life better already by doing whatever it is you've been doing here.
E

A progress page has been added to the WCHF website. I'm still updating the website every once in a while, and I'm planning to finish writing up a texturing tutorial and make it available on the website soon.

Talon 1024 said:
Modders, report for duty! The Wing Commander: Hostile Frontier team is looking for more people to help complete this mod, give feedback on how to improve it, test and polish it, and get it out the doors.

Wing Commander: Hostile Frontier is a Wing Commander fan project that aims to create an awesome FSO/WC gaming experience based on the novel Wing Commander: False Colors. The beginning of the demo campaign of the mod is set right after the ending of Wing Commander 3 and before the prologue of False Colors. The player takes the role of Jonathan "Rider" Darrel as he joins the Free Republic of the Landreich Navy as an academy-fresh rookie. Jonathan's first assignment is aboard the FRLS Independence, but little does he know what he is in for...

We would like you to have a little bit of experience in Freespace modding before you join the team. For example, FREDers interesting in joining should have completed the FRED walkthrough. Of course, if you're a Wing Commander fan who knows a lot about the WC universe, that's a nice bonus, but even if you don't know anything about the WC universe, that's OK as well. Perhaps you might learn something more about WC while you're on the team.

Here are some of the positions that we need filled:
1. Mission designer
2. Script/dialogue writer
3. Playtester

Hey man.
I used to FRED, way back when.
Would need to refresh my skills with it and adjust to the differences (if any) in FRED2.
I never really did any 3d work. Learnt some Maya, but just never got into that, so probably can't help there.
I do do writing and script writing and all that jazz though.

I'm a busy bunny, but will try to help if you want it.

Looks great. I must admit to wondering when there would be another novel-inspired Mod, and False Colors is perfect especially since I haven't read False Colors. Definitely looking forward to the demo.

Sorry about neglecting this thread. Anyway, here are some new screenshots from the last two months, and also some flight recorder footage.

Finally, ship nameplates are working properly! Some people at HLP have been working on new shaders for FS2_Open, and these new ones alleviate the problem where the nameplate would appear as a black rectangle if it shined off of a light source. I took the liberty to add nameplates to the Wake-class again.

A Ralaxath heavy destroyer (will appear as KIS Takh'lath in WCHF) being engaged and destroyed by Confederation ships.

New thruster FX redux! Thanks to Jessnec for handing me his unused thruster effects that he originally made for Syrk: The Unification Wars:

And finally I've added a few things to the hangarbay of the Wake-class, including barrels, crates, and fighters.

Here are the videos...
I've been working on a simulator mission to help players learn essential combat tactics. Many players couldn't get past mission 2 of the WCSaga Prologue, supposedly because they kept getting hit by enemy missiles. This video mainly shows the scripted ship selection system that will be used in this mission and other new simulator missions:http://wchf.hard-light.net/videos/wchf-tactrain.ogg

I just find it awesome when a Sha'kar transport explodes:http://wchf.hard-light.net/videos/wchf-explosion.ogg

These videos are encoded in OGG Theora, but they're viewable in a web browser like Firefox 4 or Google Chrome. There's no sound in these videos because I wasn't using recording software that supports audio capture.

Also @Flashpoint: if you are still interested in writing for WCHF, please send me a small sample of your writing.

I've added a new entry to the developer diaries section of the website. This entry tells about the process of designing and perfecting missions.

As nice as the recreations of original WC cockpits are, I can't help but feel that most players would simply turn them off as they restrict the view a little... Just my opinion but I would love to see them match the hud elements a little more, and take up a little less screen space, rather than trying to move the hud elements around to match the cockpits. Remembering that the original WC cockpits were made to suit a very low resolution, so gauges had to be large (and therefore take up space) in order to be readable. As boring as they were, Prophecy's cockpit struts were pretty spot on - I don't ever remember getting annoyed with them disrupting gameplay, but I never played WC3 with cockpits turned on. (I did appreciate the art, but whats the point if its only looked at once?)

Mahak said:
As nice as the recreations of original WC cockpits are, I can't help but feel that most players would simply turn them off as they restrict the view a little...
Click to expand...

Although they could be better, I tried my best to make the cockpits in WCHF not too distracting to the pilot. When I'm in a dogfight, I'm more concerned about where I'm aiming.

BTW, I released all of my exclusive WCHF assets on the CIC's birthday. In case you missed it, here's the release thread.

Wasn't happy with the stupid amount of lines on the old Scimitar texture, so I K.I.S.S.ed it goodbye and re-did the bumpmap. 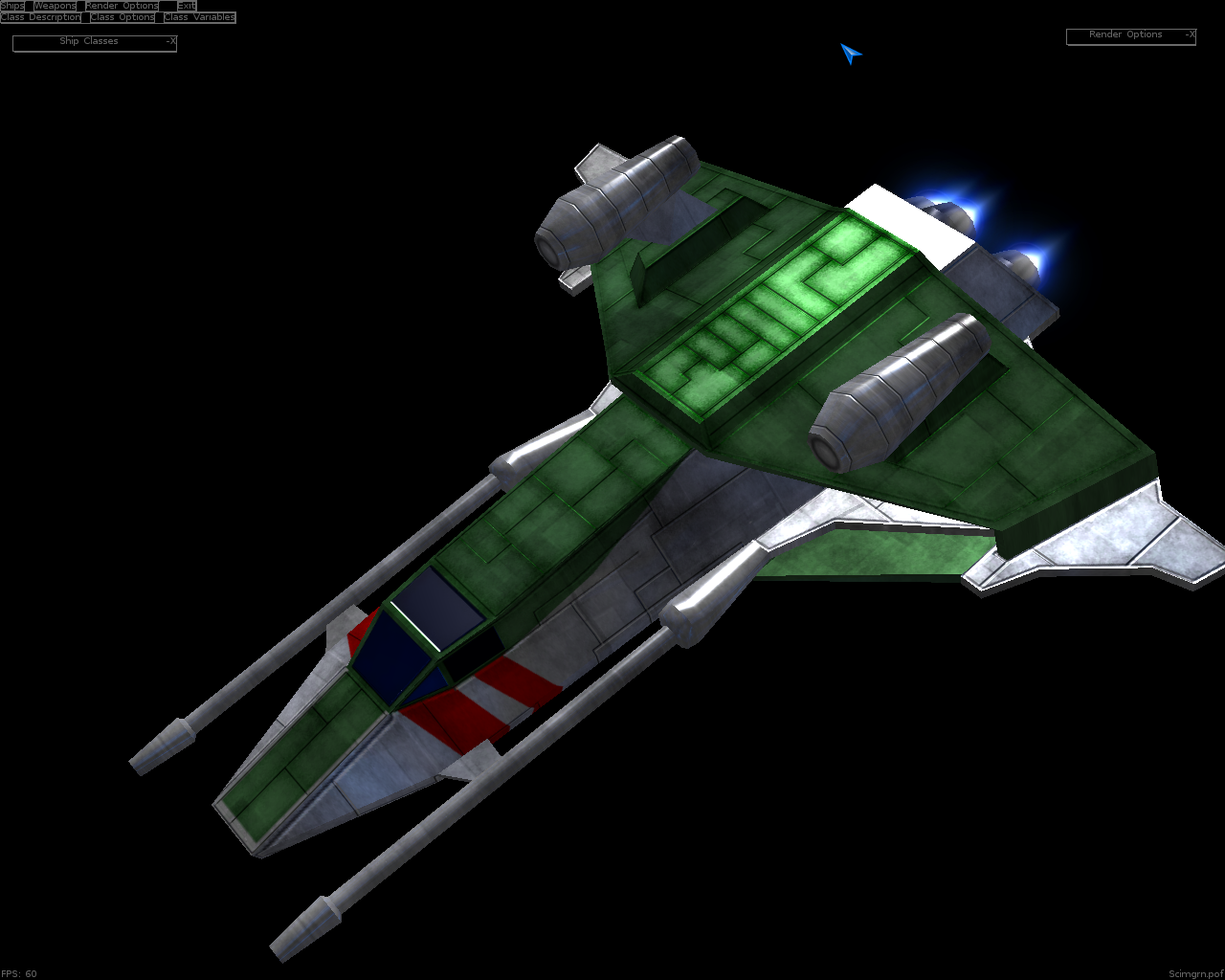 I admit I didn't like your Scimitar all that much before, but now it looks way better.
Funny how a simple bump map changes the visual appearance of a ship.

Yeah and the red stripes do their part too. Finally some appreciation for the Scimitar, always liked the shape of that ship.
By the way, didn't Starman make a Wake-class model once that looked like it would fit the WCSaga style? It was untextured i think.

EDIT: Yeah it was in this thread:

https://www.wcnews.com/chatzone/threads/midway-murphy-durango-and-others.24990/
Last edited by a moderator: May 24, 2018

Red Baron said:
Yeah and the red stripes do their part too. Finally some appreciation for the Scimitar, always liked the shape of that ship.
By the way, didn't Starman make a Wake-class model once that looked like it would fit the WCSaga style? It was untextured i think.

EDIT: Yeah it was in this thread:


I have the models from Starman01. The Wake, Durango, Kilrathi Fighter from WC Online Concept and the Border Worlds fighters. The ships are all matched for Saga (turrets etc) but.... untextured and COB (truespace files) If someone can converted it into a DAE and making the UV Map I would share it. For the Capitalships we could use the Saga Final Textures to match with the other ones.
Last edited by a moderator: May 24, 2018
You must log in or register to reply here.
Share:
Twitter Reddit Pinterest Tumblr WhatsApp Email Share Link
Top