Whether you want to capitalize it or not, I have to give the nod to the k. It evokes stronger feelings and images than using the c. Plus, it fits with the overall picture - warriors engaging in combat. In addition, these communications are spoken - so might as well tweak the written dialogue to include more emotion. What is said in battle is often not proper, so I think it should remain as it is.

That said, I think the screen shots are great. I especially like the shot of the Hornet's belly revealing expended ammo

Whether you want to capitalize it or not, I have to give the nod to the k. It evokes stronger feelings and images than using the c.
Click to expand...

Whether you want to capitalize it or not, I have to give the nod to the k. It evokes stronger feelings and images than using the c. Plus, it fits with the overall picture - warriors engaging in combat. In addition, these communications are spoken - so might as well tweak the written dialogue to include more emotion. What is said in battle is often not proper, so I think it should remain as it is.
Click to expand...

LeHah is correct, this is stupid for many reasons.

2) Words have meanings. I can not stress this enough. The "hyuck, hyuck, hyuck, I'm on the internet, I'm free from meaning!" crowd needs to be put on a bus and shot into the sun. The slang term for Kilrathi is *cats* because they look like felines. If it were 'kats' then we would be busy trawling through our OEDs and trying to figure out whether it's because they resmble African shrub trees or are all named some derivation of Katherine (Katerina, Kathleen, Katrina, Katy, etc.) This isn't some arbitrary thing, it is the very nature, the very purpose of words in the first place.

3) The thing you said isn't true. There is no perceptual difference in pronunciation between the two things. "Kat" does not have a stronger 'k' sound than 'cat' (in fact, just trying to force that to work is hurting my tongue.) Furthermore, to interject the slightest bit of editorial commentary into this otherwise completely even handed series of thoughts, people who spell words wrong to create pretend emphasis should be taken out back and beaten with a sack of frogs.

4) By its very nature, a live dialogue transcript is several specific things. In our case, particularly, it is a conceit which implies a neutral viewpoint - Blair and Rollins aren't typing up their conversation as they speak... there's a third party breaking the fourth wall to give that information to the player. It's a function of the narration - not something another element introduced with a new bias.

Mostly, though, it's just dumb. It's "how can I make this concept cuter" applied to Wing Commander's unique-racial-slurs... absolutely unnecessarily. And that comes through the second you see it - whether it's in the screenshot above or in my news posts from 1998.

More interesting then the K or C in cat is....are these Hornets on steroids? I mean neutron guns on a Hornet?

I guess there are some errors still in it like the spelling one, that fact that you still have the Arrow displayed instead of the Hornet and so on.

Tell us also something about the story and what other ships we might see.

I didn't know I was driving - but OK.

Thanks to LOAF for actually having an intelligent discussion - something I was attempting to do. I hope that you do not believe I was posting comments with the sole intent of beginning a disagreement - I very much appreciate the acknowledgement of my viewpoint.

I think my brief history at the CIC proves that I don't troll nor post dumb suggestions simply to stir up arguments. Rather, I thought it was an interesting element to the screenshots and wanted to explore the "what if" here a bit. LOAF, you gave me plenty to think about, and I stand corrected. Thanks.

...but no one uses cool anymore, spelled kewl or otherwise.

I use cool spelled cool or otherwise

ELTEE said:
I didn't know I was driving
Click to expand...

Nails into the coffin of this thread, perhaps.

Ok, guys. I hope we are done this discussion about how Cat is spelled.

@Lars: Yes, these are hornets with neutrons.

I don't know how to add a VDU image to FS2, but what I do know is that the file has to be in ANI format.

I'm not totally sure what I'm going to do with the story, but I have two different plans:

1. Do the same thing that Standoff does... I.E. Turning the novel into a game, but with different characters and such.

2. Make it non-canon and have it deal with a military operation to try and take over the entire Landreich sector.

Also, there is some good news and bad news.

Good news: The campaign will NOT feature Ninja, Assassin or Major Baws. All of the original dialogue will be replaced by my own.

Bad news: Unfortunately, I cannot change the default keys. I won't be able to until Taylor finishes his new pilot code for 3.6.11.

Just for clarification, even if you do #1 it will still be non-canon.

Do you mean a side-story that doesn't really fit into the Wing Commander timeline as we know it?

Not that that's a bad thing... just to clarify.

Nomad Terror said:
Do you mean a side-story that doesn't really fit into the Wing Commander timeline as we know it?
Click to expand...

Well, it will be a side story, but it will fit into the WC timeline... About the same time as FC.

So in this are we, the players, going to be part of the Landreich, Confees, Mandarins, Belasarius Group, Rebel Cats, Blach Lance, Fireakkans, Privateers, Mercenaries, Pirates, Retros or what?

Sounds like the player would be a Landreich pilot.

QuailPilot said:
So in this are we, the players, going to be part of the Landreich, Confees, Mandarins, Belisarius Group, Rebel Cats, Blach Lance, Firekkans, Privateers, Mercenaries, Pirates, Retros or what?
Click to expand...

The player is going to be a Landreich pilot. You only need to look at the thread title.

But, what is Belisarius Group, and is Confees another name for Confeds?

Kevin Caccamo said:
But, what is Belisarius Group, and is Confees another name for Confeds?
Click to expand...

You really should acquire the background material before setting a project in an era, I mean setting a project in the time of FC but not knowing much of what happens in FC isn't exactly the smartest idea. Or at least search the forums. Belisarius is something we've talked about at length and yeah Confees is a slang term used by Landreich personnel.
M

All I can say is it's about time someone remembers the Landreich and make a game on them. I was going to ask people why there’s no game on the Landreich and there is on the Border Worlds Union they are the same as they split for Confed and helped defend earth. But there is one thing I'd like to say is it you should have some missions were you start off hurt like they did in Unknown Enemy as they won't all was have there ships in perfect working order. Also will you put it that you can fly some Kilrathi ships and the fighters weapon load out’s will you change them up a little like giving a Krant in stead of lasers maybe some meason blasters to give it some more of a kick. Or maybe but a Confed and a Kilrathi ship to gather in some form or another. But good luck on this project it’s looking good.

Bandit LOAF said:
Although Standoff (I think?) had neutron-armed Hornets
Click to expand...

Yes that’s true but a Landreich stole a lot of their equipment to so they may not follow the book like Confed would. And if you’ve played Standoff and fought with the hornet you’ll see its not a very affective fighter those neutrons drain a lot out of the ships power. And is no good past the light fighters, as you can’t fire a steady stream of fire to get through their shields faster. But if you don’t have the recourses like Confed has to fall on you look for other was to make what you got work as good as it can. And there’s nothing that says that they can’t swap out old engines and but in a better on with little to no change to the ships design. Giving it the power to have stronger shields and power for there guns.

Yes that’s true but a Landreich stole a lot of their equipment to so they may not follow the book like Confed would.
Click to expand...

No they didn't. The point of the Landreich is that they're a growing nation and not some group of space criminals. In Fleet Action they're putting together spit-and-glue fighters from technology the Confederation has thrown away... and by False Colors they're buying squadrons of surplus ships to create a more unified Space Force.

None of this is relevant to the point, though, which is that the Landreich Hornets seen in False Colors use lasers. Since Kevin is adapting False Colors (or setting a story around the same time) then it seems reasonable for him to use lasers on his Hornets.

Also, I implemented two changes suggested by LOAF ("C" on cats + Lasers) and a new starfield too, which are all in the third shot. 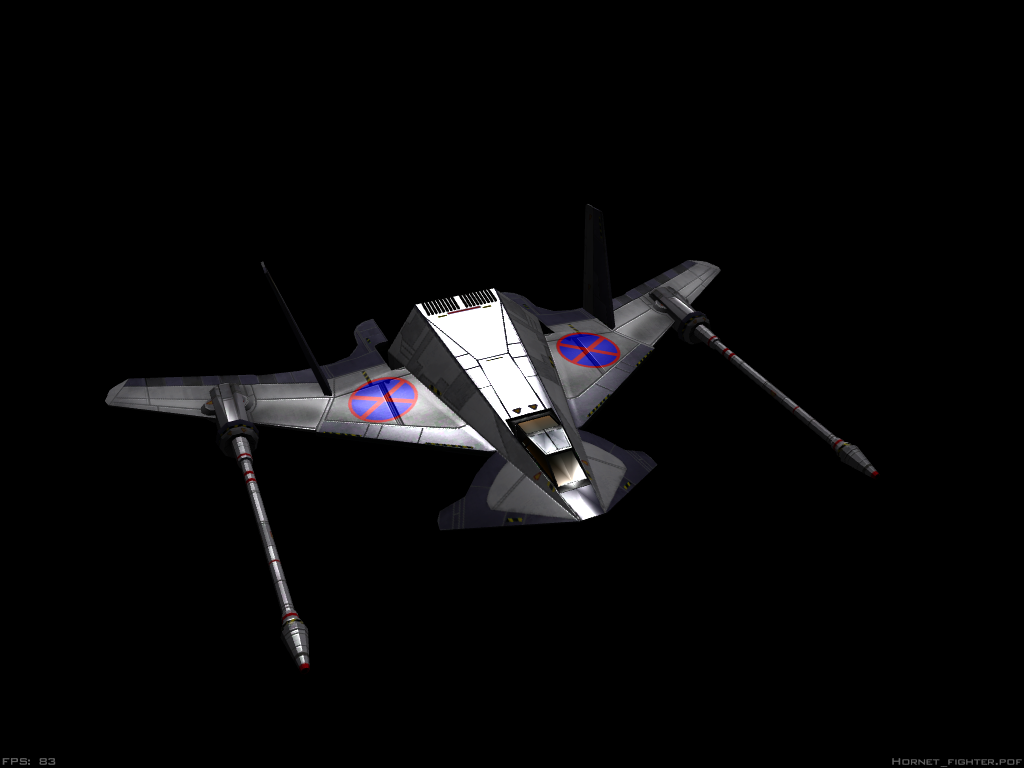 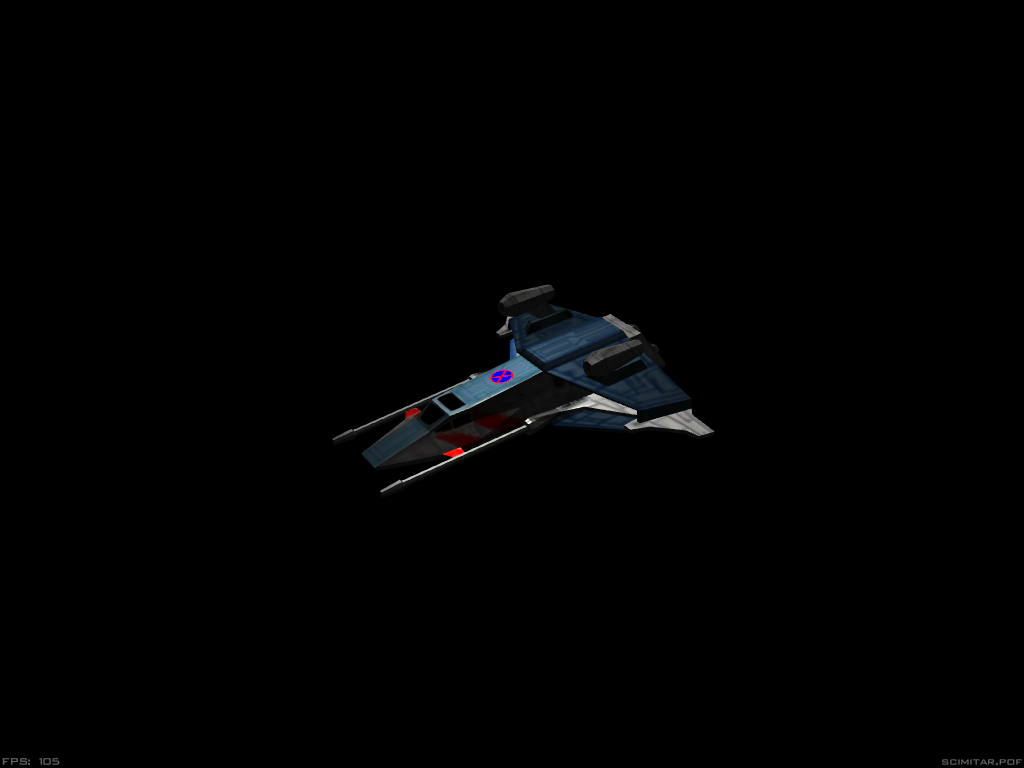 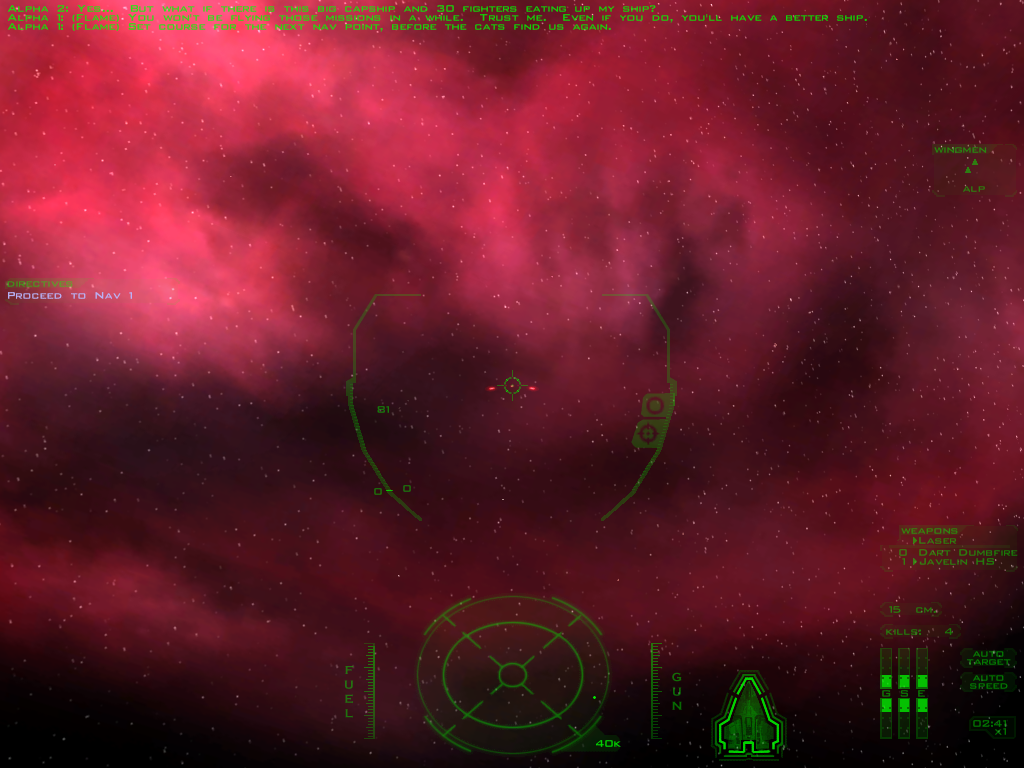