As my brother have already informed you, yesterday we were interviewed by Brian Rubin from SpaceGameJunkie. We did spent more than one hour in talking about Wing Commander stuff and truly we had a great time with this guy. For those who are interested to know what was said, just watch the following podcast.
Beware it's a lengthy one! We hope you like it.


Soon, we are going to post you those studio pictures we have promised.
Until then,

I'll check it out when I get the time. Sounds fun.

Great interview. The mission co-op sounds cool, I hope it pans out well. I need to download and try it, looks like the tutorial isn't any easier since I first played; watching Brian get blown away by turrets for an hour and fifthteen.

Thanks for sharing and great to hear you!
K

Thank you very much guys!

We are glad you liked the interview!
K

We have been a little quite lately but it is for good reason. We are preparing several goodies for our next major release. However we decided in order to keep everybody in the loop to release each week a screenshot (or two) either from the additions / improvements or from behind the scenes. So without further ado we present you the...

SCREENSHOT OF THE WEEK 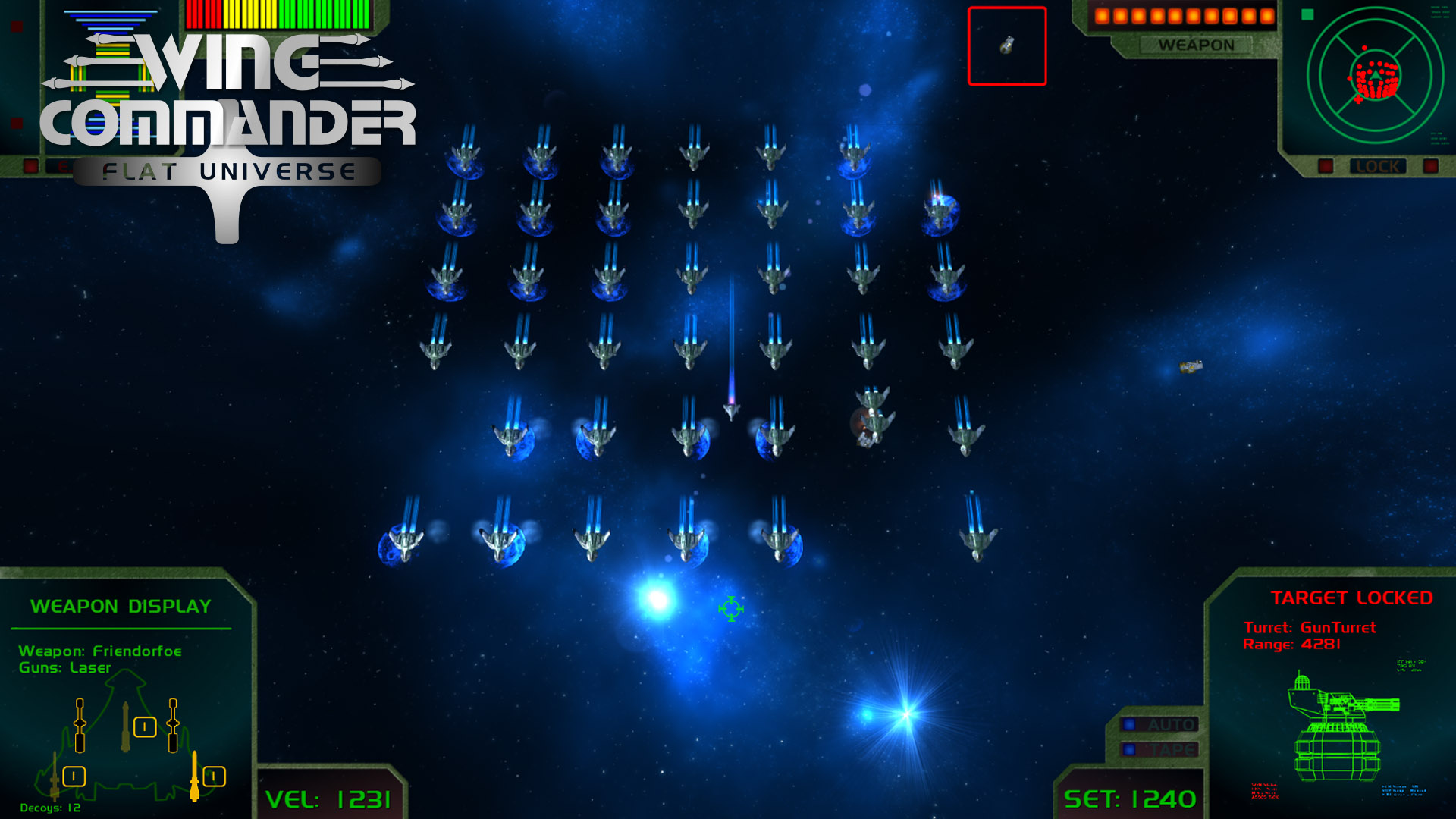 Q: How do we test the game performance?

A: How about 40 hostile and angry broadswords along with a couple of turrets?
S

(already looking forward to the next screenshot!) 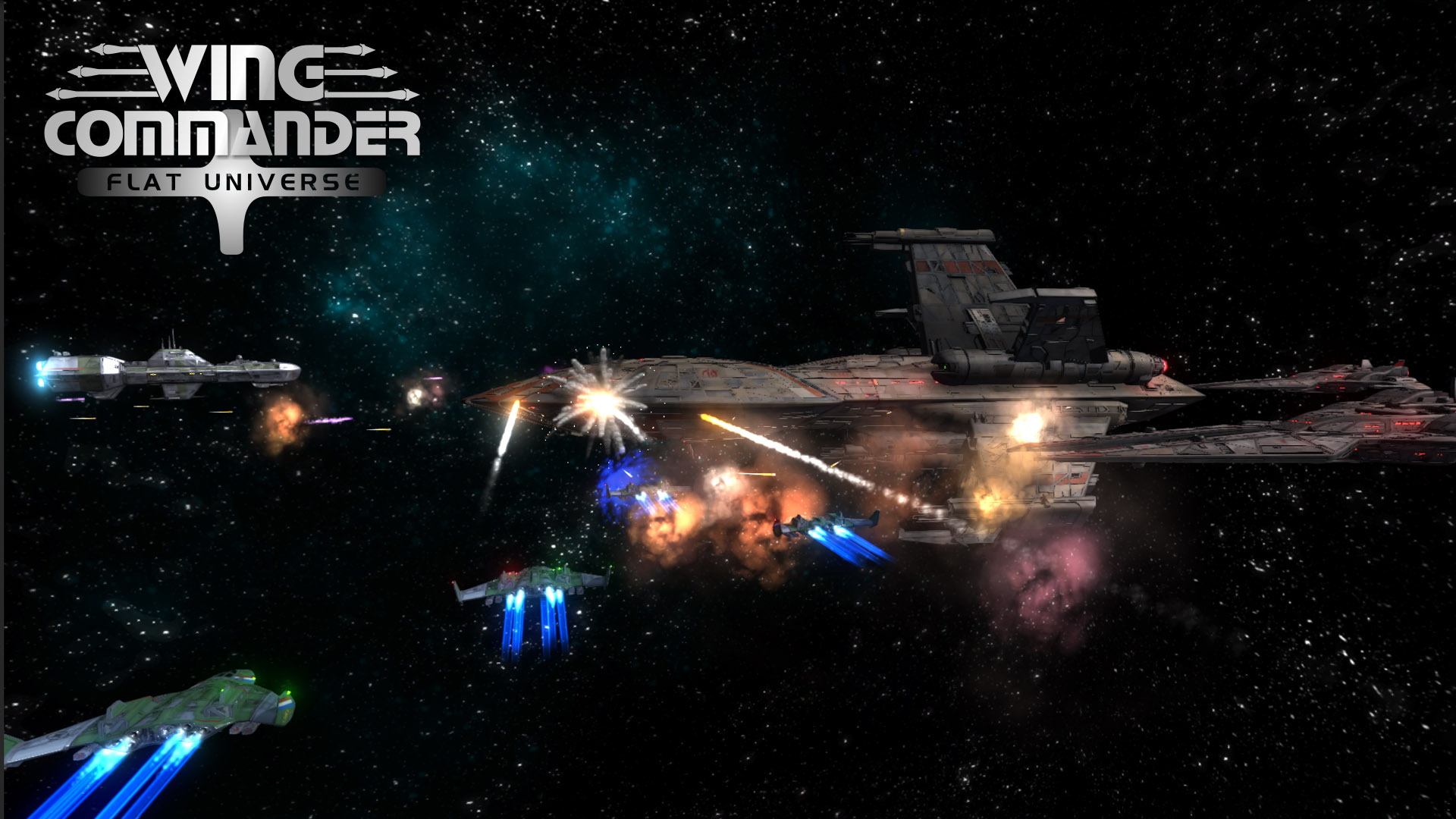 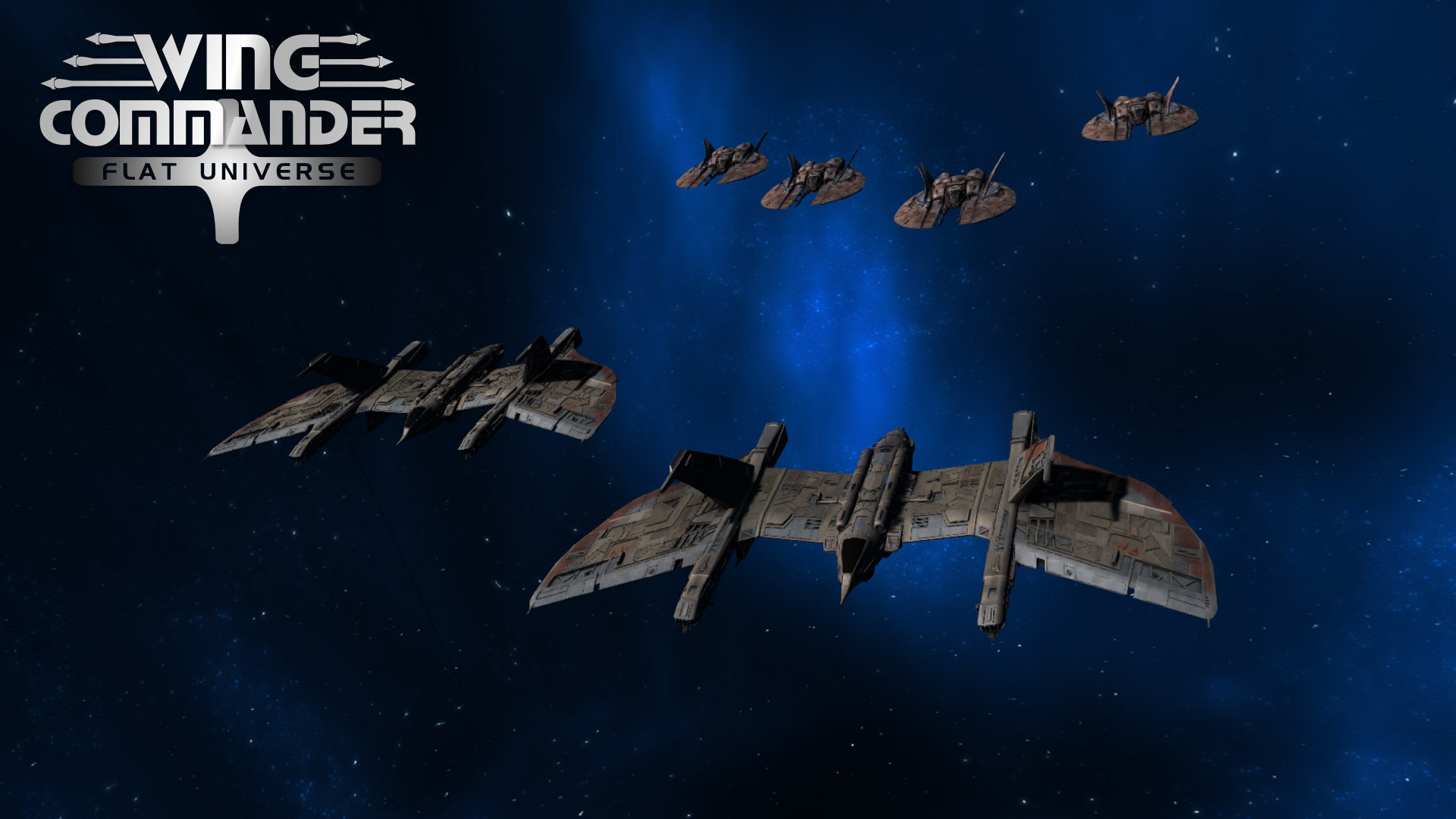 TCS Hermolaous (Southamton Class Destroyer)
A voice from the speakers: "This the Captain. Brace for impact!" 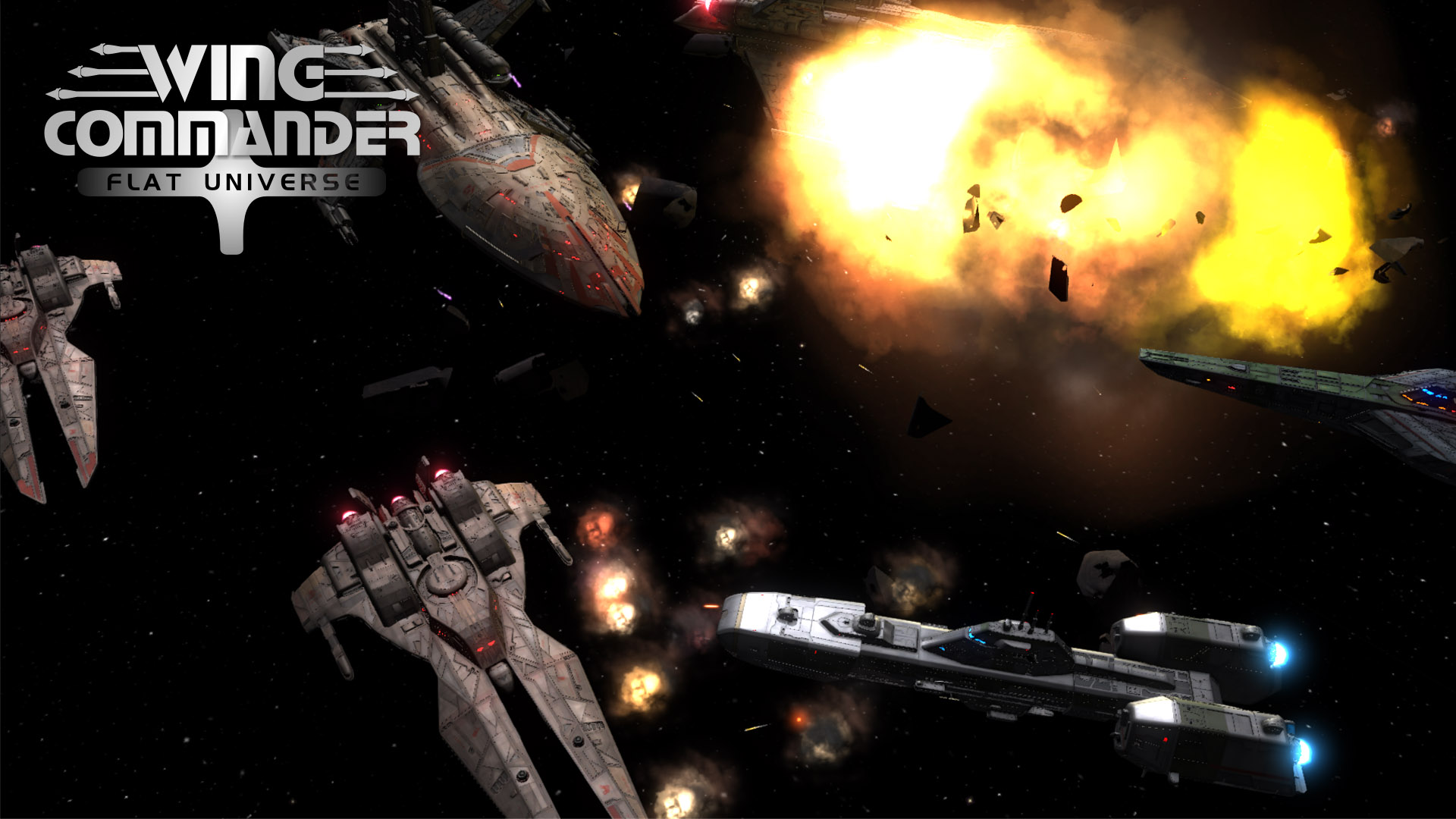 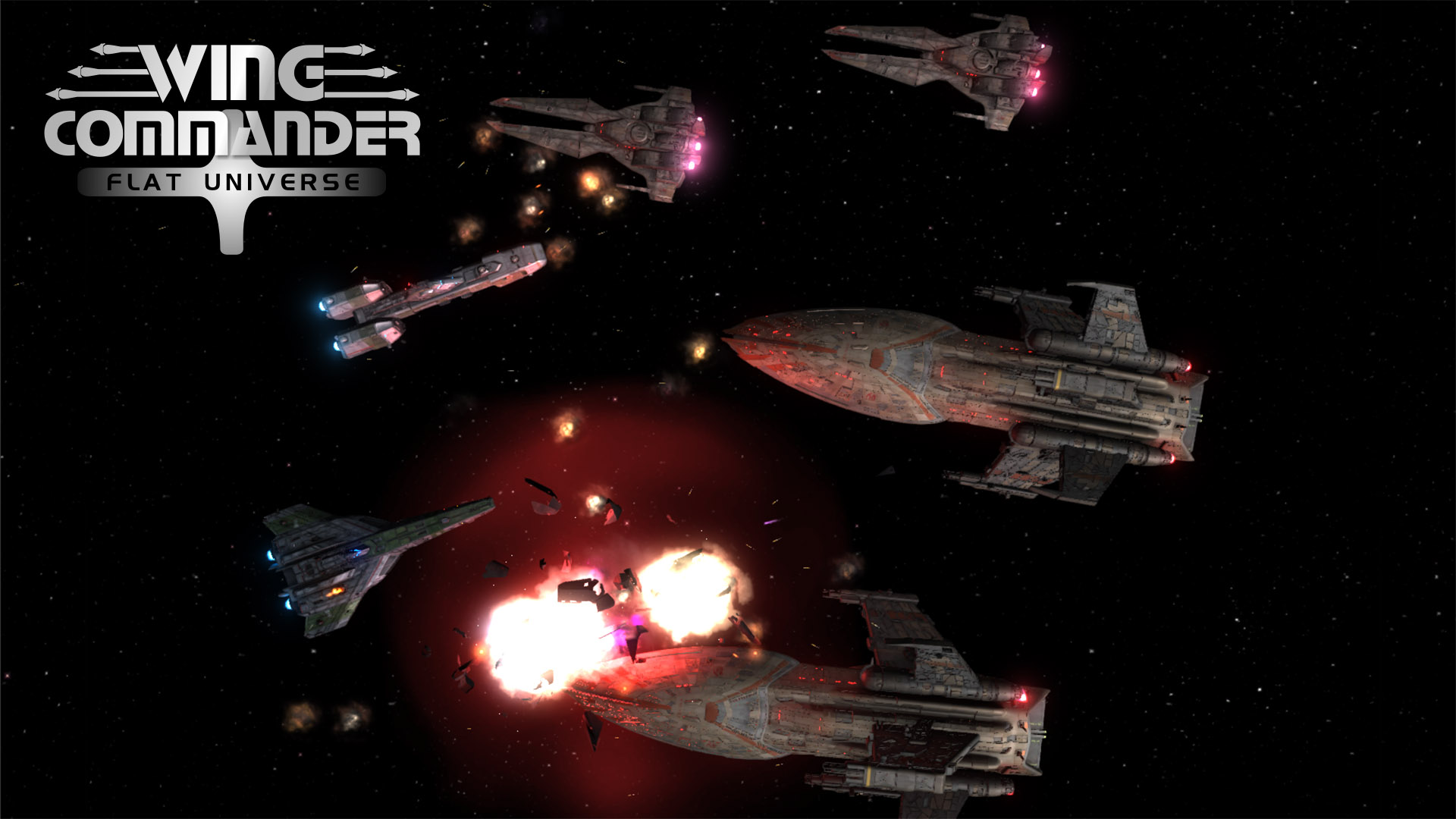 Maslas said:
A typical WC patrol mission...
Tower: "Long range sensors show a squadron of four Dralthi IIs and a couple of Grikaths."
Pilot: "No worries base. They are no match for my Scimitar!"

Hm. I do believe you could take this in a Scimitar. Although I think rear turrets on the Grikaths would present the most serious obstacle. If the Grikaths fight defensively, you're going to have a problem given the Scim's weak shield regeneration...
K

Toast said:
Although I think rear turrets on the Grikaths would present the most serious obstacle
Click to expand...

Yeah fighter turrets can be very annoying at times. Plus in our game they have the added "bonus" that the attacker has on dimension less to maneuver.
At the moment we are trying to balance them in order not to create the all powerful Broadsword bomber! 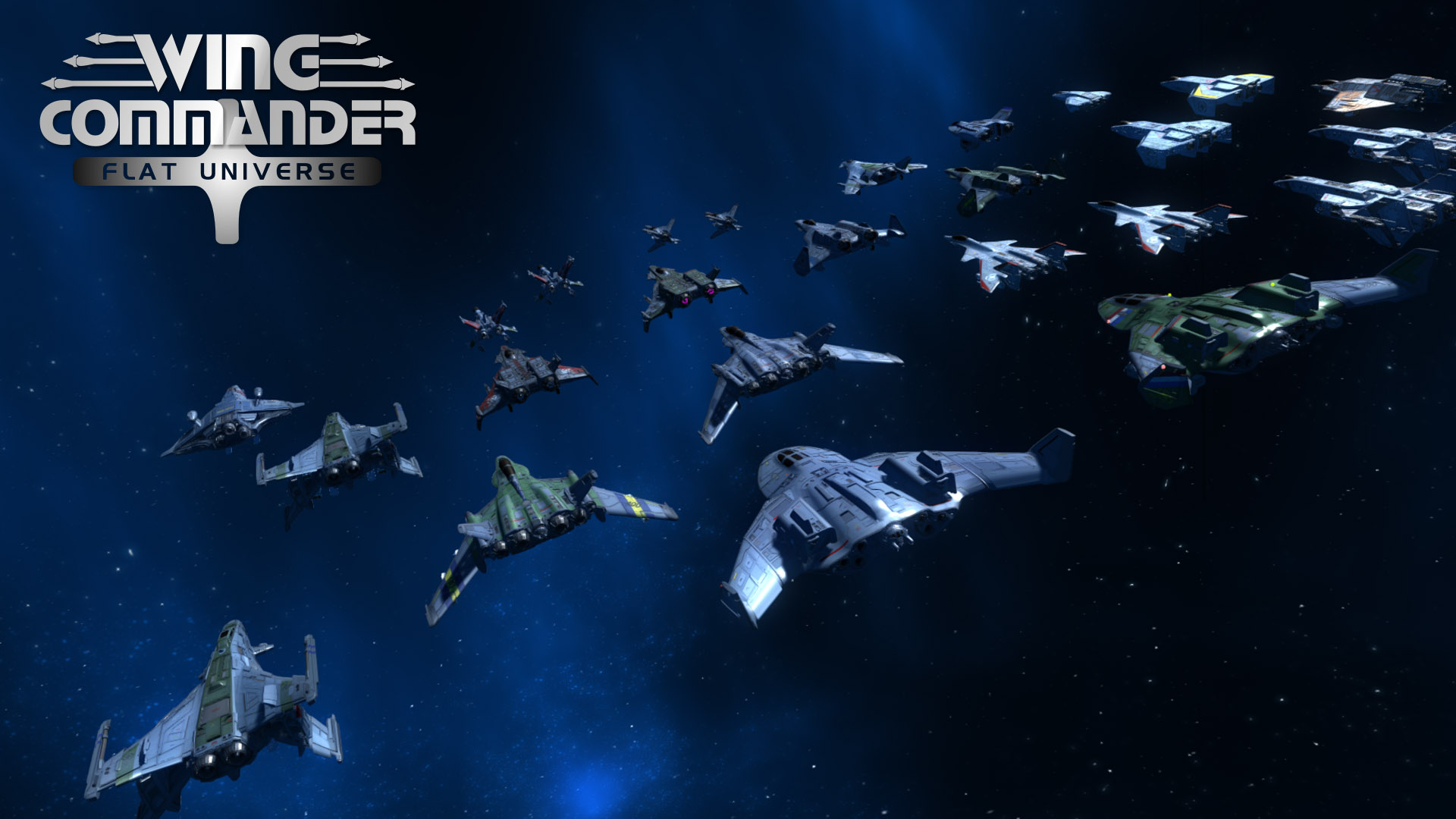 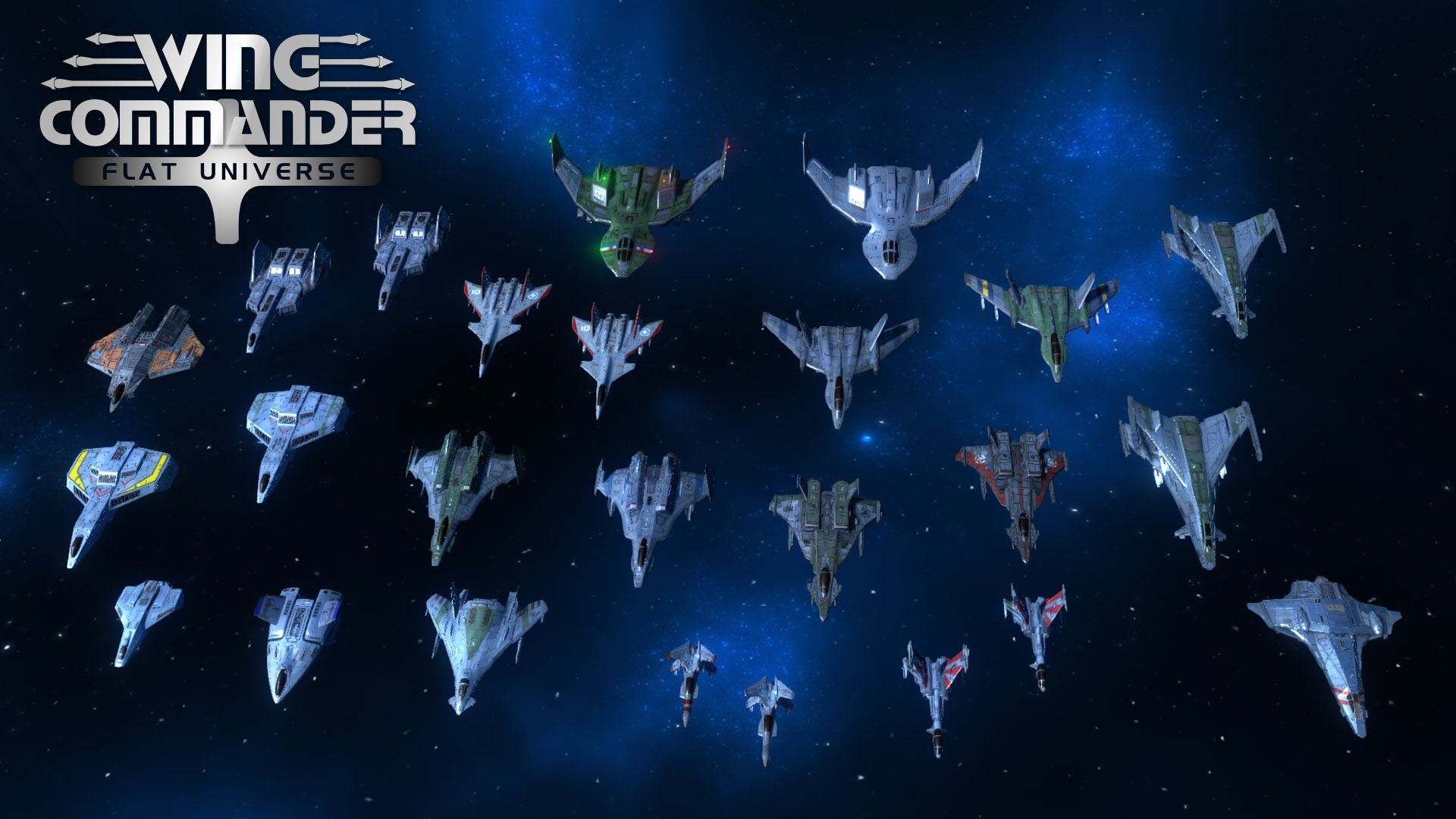 A warrior's fate
by Maslas

Kilrathi... a true warrior's race. For generations they are born and braced with the idea of becoming great warriors. It is said, that when a Kilrathi warrior dies by natural causes or illnesses then the fate of his spirit is to be judged by “Sivar” himself...

Second Codex
3:18:12
Fortunate is the warrior who meets Death in Battle; no true Warrior should die in bed with his claws sheathed.

It was this smell in the air that brought back many memories from his youth, the days of great glory. A good portion of light rays managed to sneak into his hardly opening eyes. There wasn't anything else that could disrupt him from his deep sleep except from this intense smell and the male's voice.

Fortunately, the sun's light started slowly to clear his vision but the face that was still forming over him wasn't a familiar one.
Valgkh nar Alkir, used the rich striped fur of his paws to help him clear out the picture of his nearly awaken eyes.

“Who are you old kilrah'hra? And how do you dare to push me with your stick?”

Valgkh made a sharp jump by pushing his back towards the ground where he was lying down that managed to elevate his giant body vertically to the ground without even moving his paws. It was mostly a move to demonstrate his superiority against the old low-born kilrah'hra.

“It doesn't really matter who I am or how they call me. What matters the most to you right now, is my function.”

Within a split of a second, Valgkh extended his claws from his right paw and pointed them right after the old kilrathi's-like throat.

“Give me a good reason not to kill you right now; you low-born”

The old kilrah'hra used his stick to move the warrior's claws away from his throat with a remarkable apathy.

“First, your moves do not intimidate me for I am as blind as your pride makes you. Second, I am your guide to him.”

The old male pointed with his left finger to the necklace he was wearing.

It didn't take much time for Valgkh to understand what the old kilrah'hra was talking about. It was just too difficult for him to accept the fact that “he” the master of his hrai died after he had a good night's sleep. The smell of the birha's red flowers was there to prompt him that he couldn't just sleep the previous night on his quarters on board the hrai's flag ship located near the Border Worlds territory on Epsilon sector and wake up the next morning somewhere in the middle of Kilrah's orange jungles.
Their walk through the Kilrah-like jungle, with the old kilrah'hra leading the way, was rather informative as he possessed a very strong knowledge for each and every sort of thing that crossed their road, from animals to plants or herbs. Most striking was his incredible sense of navigation the sort that only a well trained scout could acquire. If only he had his vision, the seasoned warrior thought.
As the time passed by, Valgkh realized that botanology and scouting weren't the only virtues that old male possessed. His points upon war tactics and Kirathi philosophy were unimaginable for a person who's only function was to escort the dead warriors to the god of war. Soon, his contempt for the old man turned into respect and not much later into a true admiration.

“So, tell me what makes you think that your spirit belongs to the unhonored?” The old one asked with his useless sight locked into the far distance of the path.

The warrior responded but he didn't care to look at him. Either because he though that it was futile or due to the fact that he couldn't expose his true embarrassment to him. Although he was an old blind kirlah'hra.

“As it was written. But please care to tell me again. You had your battles and you won every and each of them, right? You were victorious in your time. Does death in battle means so much to you and your hrai?”

Valgkh, rose his gray white striped paws and looked at them. He murmured something behind his stabbing teeth but he didn't have the power or the will to extend his voice.

“I thought so!” Said the old one with a grin in his face.

The discussions about victory and honor kept for a while more and the more the warrior was to talking about his siblings and their achievements in their battles the more his pride was drawn in his face.
Finally the path came to a dead end. The sun was almost hidden behind the rich trunks of birthas. Every second later, the sky was getting darker and darker, soon enough it was crowded with millions of stars. An experience that brought, Valgkh memories from his days on Kilrah when he was trained to become the kilrathi he came to be.

“Warrior...” The old kilrah'hra pointed with his stick to nowhere. “this is where our journey ends.”

“You lost the road you old blind fool!” Valgkh erupted with anger just like the volcanoes did once on Kilrah. “There is nothing here!”

“Exactly.” The old kilrah'hra answered with same cynical way he did when they first encountered each other. “There is nothing else you can do that your descendants won't do for you.” And he turned his back to him while he was moving away from him. In the end he disappeared into the void.

“Wait! I ought to meet Sivar! I must be judged for my actions.”

Before the old one's figure was about to disappear in the background, his voice managed to reach the warrior's hearing.


Dedicated to the ones we didn't have the chance to say goodbye to them.
S

This project is getting more and more interesting!

Thanks for the updates!

The last screenshot; fighter on bottom-left. Looks like a mini Hellcat. What is it?
I

I like the portrayal of Sivar here--he reminds me of Odin--blind yet still wise and powerful, and willing to act humble in order to make a point.
K

Wojo said:
The last screenshot; fighter on bottom-left. Looks like a mini Hellcat. What is it?
Click to expand...

It's Klavs' concept of the Wildcat.

Based on this image from the academy cartoon where he presumed that this is not in fact a Hellcat but its ancestor the Wildcat. 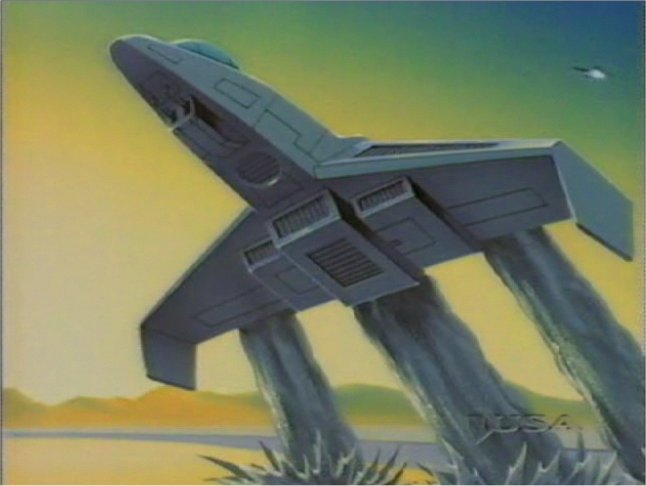 In our game the Wildcat is supposed to be a Scimitar era light fighter replaced maybe by the Hornet. That's pre Wing Commander 1 given that in Secret Missions the Scimitar was official retired and it was almost 100 years old.
Last edited by a moderator: Jun 8, 2017

Ijuin said:
I like the portrayal of Sivar here--he reminds me of Odin--blind yet still wise and powerful, and willing to act humble in order to make a point.
Click to expand...

Never thought of Odin. As a matter of fact I've heard before about the god Odin but I've never got the chance to learn the story behind the name. However, in this case Sivar is based mostly on Greek mythology.
Charon, was Hades' (god of underworld) ferryman who carried the souls of the dead across the river Styx the boundary between the world of the living and the world of the dead. In some cases, Charon was described as blind, so that he couldn't see the children he carried with him and deaf because he shouldn't hear the mothers begging for the lifes of their children.
Another common phenomenon of the Greek mythology is that gods where intervening on human matters. Sometimes in the form of a natural effect (wind, storm etc.) in some other cases in the form of a human being or an animal.
Pretty much, this is how I imagined Sivar in this very short story.
And I am happy that you liked it.
You must log in or register to reply here.
Share:
Twitter Reddit Pinterest Tumblr WhatsApp Email Share Link
Top