Just wondering if anyone has colour images of the ribbons as awarded in WC1?

Or a guide as to how they are placed on the uniform jacket in WC1.

Claw Marks provides details on all of the ribbons but unfortunately the pages that describe them are in black and white. The best way to see the order of precedence would be to look at a screenshot from WC1 of a player's awards after they have received all of them: 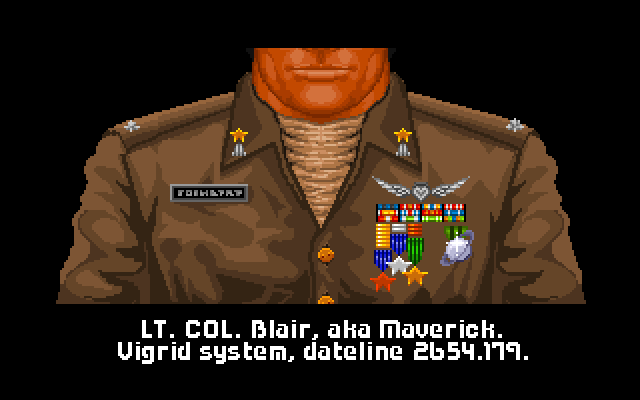 After that, you need to reference Claw Marks to see which ribbon is which. Doing that, we see that the order of precedence is, from left to right:

On most military uniforms, medals are represented by ribbons that match the ribbon pattern of the medal which are worn with other award ribbons, but in the Terran Confederation Navy of this time period (2654), the medals are worn separately on the uniform. A bar matching the ribbon color is added for each subsequent award. For example, the pilot depicted has received the Bronze Star seven times. From left to right:

Hope this answers your questions!

Sylvester, that is great!

Thanks so much, wanted to have this kind of reference for when I try to run some WCRPG and I wanted medal and ribbons reference to use as extra rewards / XP for the group.

Thanks again so much.

When/if you do run the game, I'd love some feedback on it. You know, stuff like what works and what doesn't, what's confusing in the rules, suggestions, complaints, etc.

(Presuming you're running Prelude, Enyo or a homebrew with the full rules, of course; if you're doing a different WCRPG, never mind).

Interestingly, two of the Japanese ports include full color manuals which show the ribbons. The MegaCD version (http://download.wcnews.com/files/manuals/WingCommanderMegaCDManual.pdf) gets them exactly right... whereas the Super Famicom version is full of weird and different ribbons (http://download.wcnews.com/files/manuals/Wing Commander - Super Famicom Manual.pdf)

Medals were one of those touches from the original Wing Commander that I really liked. I can understand why they didn't make it into any of the subsequent games, but it still would've been cool to have them in there somewhere.

Capi3101, I am looking to run Enyo or Prelude. And have advised several people to check out your work so far.

I need to read through it myself to see how it all goes. I also have plans to revisit D6 WCRPG idea sometime once I have read the OpenD6 Space pdf also! So much reading so little time.

And Loaf thanks for the link mate that seems to have nailed it one the head for me!

So much help! Cheers all.
F

capi3101 said:
Medals were one of those touches from the original Wing Commander that I really liked. I can understand why they didn't make it into any of the subsequent games, but it still would've been cool to have them in there somewhere.
Click to expand...


I agree. I seem to remember some article or something mentioned that medals and promotions were back in Wing Commander Prophecy, and I was really looking forward to that, but all that wound up being was a few set events in the story. Nothing against Prophecy - I really loved that game, probably more than any game since the original - but I was really hoping to see a return to WC1-style medals and promotions, or at least medals.
F

Speaking of ribbons and medals in WC1, I'd always use a failed Ralari mission as a good opportunity to get a golden sun.

I could never do that... I honestly couldn't stand the idea of wasting Confed's money if I didn't absolutely have to.

Flashpoint said:
Speaking of ribbons and medals in WC1, I'd always use a failed Ralari mission as a good opportunity to get a golden sun.
Click to expand...


Yeah - I'd do that too, except I would use one of the first three Venice missions, where I knew I couldn't get on the losing path. I always hated that they made me choose between getting a full chest of medals and successfully completing all the missions. That might actually be my biggest complaint about the game!
You must log in or register to reply here.
Share:
Twitter Reddit Pinterest Tumblr WhatsApp Email Share Link
Top