As stated above here are new vision shots of the Vanguard I've been working on.....I still need to do a lil more UV Mapping placement...But Hey I added hardpoints!!!! Looks like an ugly....dirty....dog

Tell what you think?

Wow. I understand you're not quite done with texturing and lighting... but she's pretty ugly. I always preferred the sleek, light design of the WC2 Rapier over the SWC Rapier.

But ugly isn't necessarily bad. The Scim's pretty ugly too! This Vanguard is bulkier and dirtier-looking than the Arena Vanguard, very threatening, and looks old and solid, almost like you've blended a bit of the WC Movie aesthetic into the SWC Rapier. This could really work, actually. Like the Rapier got fat, heavy, solid, and stronger late into its life - sorta like, oh, I don't know... George Foreman. From space superiority fighter to strike fighter.

Do you think you'll make her fly the way she does in Arena? The various Rapier II variants in Arena are all much slower than the WC2 Rapier II. I don't think any one of them has an afterburner speed over 1000kps.

Actually after I put in the stats of the Vanguard in and played it a bit.... Obviously it takes some hits.... It handles actually fairly well... But it does make it a challenge.. With the speed issue only 690 for afterburn and 365 for cruise. Now I don't personally have Arena but....I'm looking at Star Soldier and does the Vanguard actually have 80 Dumbfires?? or is it 20 on Four Seperate hardpoints? And yea I love my George Foreman Grill!!!, Ugly but in a curiously cool lookin kinda way....like a Pug, Or even better yet Ving Rhymes Looks mean n ugly, George Foreman was a good,strong fighter, Kinda like the Rapier!!

(Hope I don't get in trouble for that comment)

One thing I did run into was the 1200 Poly Count!! Which BTW sux only reason being is that the Hardpoints take up like 200 polies on there own. So I can only make a model around like 950 polies than. Although I'm only trying to make one or textures per model. Which kinda helps with speed.

JasonRocZ said:
Now I don't personally have Arena but....I'm looking at Star Soldier and does the Vanguard actually have 80 Dumbfires?? or is it 20 on Four Seperate hardpoints?

I don't have an XBOX 360, but from the gameplay footage I've seen - yeah, 80 dumbfires. S*S suggests that the dumbfires use Dragonfly technology - those rocket pods from Prophecy. The Tigershark is about 14 meters in length and carries 8 missiles and 36 rockets, and it's a Prophecy-era fighter (obviously). The old Rapier II is 19 meters long, so if it's been beefed up with large slabs of armor, expanded internal space and weapons bays, it might actually be able to lug around 80 Prophecy-era Dragonfly rockets (each with about 1/8 the warhead yield of a Prophecy-era dumbfire). Carrying around all that ordnance might also explain in part why the Vanguard is sooooo slooooow.

Here's a Retexture of the Broadsword that I was working on.... Again this ones not in the vision engine and also no hardpoints...........YET

I'm actually lovin both of these ugly yet pampered pooches...

I was thinking maybe the 80 Dumbires actually isn't a bad idea.....your right the Tigershark does carry 36 of those dragonflys... Hmmm I'll take that into account and add it too the specs.

Also I can't seem to get turrets on the thing, I'll keep tryin tho. I go through Killerwave tutorial but still am having trouble.

That broadsword is cool!

You guys seem to have inspired me to get back into Vision modding as well, and I noticed a z-buffer problem that happens in OpenGL, but not D3D or Glide mode. Hopefully, Pedro will check into that soon.

Also, you may want to get rid of the artifacts of xNormal baking of the Rapier textures. E.g. If you look at the texture and the UVs of the model at the same time, you may notice that the texture doesn't completely cover the UV coordinates. (Sorry for not mentioning this earlier.) 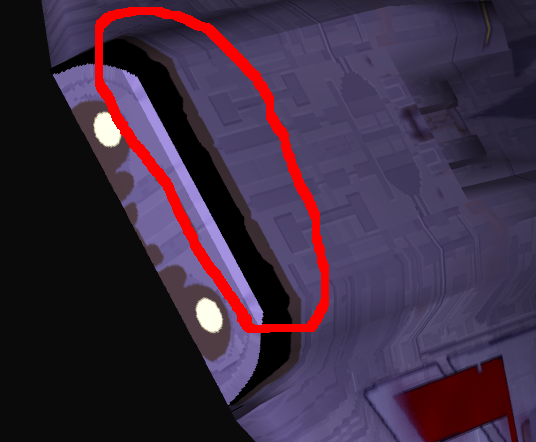 Looks cool, both the rapier and the broadsword... I was always a fan of bulky, solid fighters...

Well to be honest The mod that I'm doing.....I want it to look really weathered because it seems from reading through Star Soldier and the like...that Confed had there hands full with the Nephilim at many times and I can't imagine Confed painting ships while out in space, I mean I guess it's possible but no likely...Probably painted once and that's it once the ship takes a little damage I'm sure there's not some droid painting ships on the deck... but then again I guess there could be.... I can't really imagine the fighters being like super brightly painted things especially in space. I mean of coarse I'll add some eye catching things but nothing like a WC1 Bright Green scimiter

Although it does look cool

It seems from reading S*S too that most ships used Durasteel...What happened to Tungsten?
S

Please enlighten me, what is this mod? When does it occur in WC timeline?

JasonRocZ said:
It seems from reading S*S too that most ships used Durasteel...What happened to Tungsten?
Click to expand...

Tungsten has become especially precious in recent years, as it is an essential component of the advanced ceramic alloys used for tactical space armors. With the massive depletion of the Nephilim War, many manufacturers have reverted to using layers of heavier Durasteel Armor. This practice effectively slows present day fighter designs significantly compared to those used by advanced military units. A new source of Tungsten means that the mass production of significantly faster, better armored craft may be on the horizon."

So basically, they ran out. Since this is being reported in S*S, looks like many of the fighters in your mod may be relying more on Durasteel than tungsten-incorporating armors.

YAY!!! the project is getting featured on the front cover!!!

Acceptance speech: "I want to thank my mom,my wife, my beautifule daughter and most of all I want to thank the Wing Commander Fans for giving me this award!!!

This get's me geared up more...This is awesome!! Oh well Tungsten I guess has become a rarity....Hmm sounds like maybe some industrial centers got busted up by the Nephilim.
S

I've been waiting AGES for a MOD like this. I wish you the best of luck.
So basically (as I'm not acquainted with starsoldier), what happened since the capture of the proxima accretion device? Was there a second nephilim invasion? or did confed explore nephilim territory? Did they end the bug menace once and for all?

I remember in prophecy the nephilim mentionning the "mother creature", if we take into account their collective like ways much similar to that of insects (this is also enphased as they refer to themselfes as the alligned people), then their leader is a sort of queen, right? Did confed destroy it?

Why don't you just read StarSoldier?

Neat idea and nice work on the Rapier. I look forward to seeing what this turns into.

I'm not sure why so many people are encountering this lately. It's the #1 Hot Item on the front page. It's not like people have to go searching for it.
M

I'd like to ask if you know which if not all Arena ships are you thinking of putting in your mod and its all ready looking good, can't wait to see how the rest looks.

Well So far I've been working on........and/or plan on having the following ships in the mod.

1. Obviously the Rapier...I'm looking to put in 2 Varients one of which being the Blade and the other being the Vanguard.

2. Also I've been working on an Arrow. I think Arena calls it the Scout Varient

5. The Puffer Class Ships. (Which little is known about, so that makes it even all the more fun to idealize)

6. And a few ships which I haven't really decided on yet as (Out of the WC Universe) Fan made of coarse.

7. Also a few new stations, Hopefully the Refinary, Fuel Depot, and Space Colony (Which I have to figure out on how to get into the Vision Engine) and also turrets....turrets....turrets....I'm having a tough time putting turrets in...Which usually ends with me getting frustrated then going to sleep

Oh Here's the work on the Arrow....Although (In Progress) Without guns too.....Yet

These are just renders seeing how at work I can't actually play SO to get them in the Vision Engine but once I get home I'll continue work on it.