ok, ok. I know this is a rather silly thing to do, but I was in an artistic mood and I have seven of these (well six now, really) vagabond cards. So I decided to flex my fingers a bit. Keep in mind I did this to the card. so my canvas was 2x3 inches

also keep in mind that I still have to apply a coat or two of black to it. but let me know what you think!

here is the original card as well. 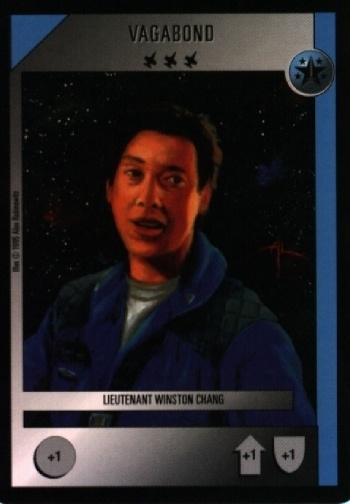 It's a neat idea... the problem is that it isn't a great painting of Vagabond to begin with. It just doesn't express his personality very well (kudos to the Mag Force 7 guys for deciding to have some popular wingmen as uncommons rather than rares, though...)

One thing I've toyed with is doing a CCG 'expansion' someday - do some new art elements (mostly screenshots) and put them on existing card templates. Could be fun.

Back in 1996 they were talking about an expansion, which would have included the Kilrathi corvette (people *demanded* this, I have no idea why) and a new faction of grey 'colonies' (Border Worlds) cards.
You must log in or register to reply here.
Share:
Twitter Reddit Pinterest Tumblr WhatsApp Email Share Link
Top