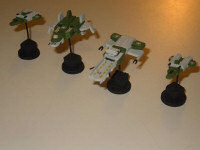 Jay wanted to let everyone know about two Wing Commander packs available for Starmada using the Victory By Any Means pen & paper role playing system. It looks kind of complicated to me, but people familiar with the game can use these ready-made Excel sheets to play their own Wing Commander themed variants. The general mod pack is available here. The second pack is a larger file with much more detailed spreadsheets for fighter combat. Last year CmdrPanda made some impressive miniatures to use as well.

Starmada is a simple (but not simplistic) board game of starship combat, in which players square off in a general attempt to blast each other's fleets into just so much space junk. 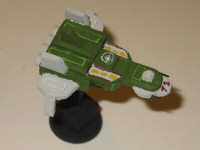 While the universe of the Imperial Starmada and its major adversaries is fully detailed in the rulebook, Starmada is much more than just another game, tied down to its own background. Instead, Starmada can be played in just about any science fiction setting you can imagine. There are dozens of optional rules, exotic special equipment items, and menacing weapons that can be used or discarded at your discretion, to create the type of game you want to play!

I came across some WC material for the second war era. Players have been using it in the VBAM game system, and I thought I would pass it along to the community. Tyrel Lohr is the author of the material. I don't know if it is perfect, but it is fun.
Click to expand...

Those packs will allow you to play VBAM, but not the Starmada tactical system. I have sheets that can work for that, if I can just dig them up.

Also, I built a Confederation class dreadnaught, five Concordia class carriers, two rangers, and a ton of Durangos for use in a campaign this past summer. If I can find the ships and borrow a camera I can send those to the CIC as well. I also built four of my conception of a Confederation pre-war battleship. The battleships ended up being useless in real combat - they were well armed and armored, but they were just way too slow.

I'm really glad to see someone else taking an interest!

Thanks, we tweaked the wording in the original update slightly. How's that sound? https://www.wcnews.com/news/update/6887
Last edited by a moderator: May 24, 2018
C

Looks good to me. VBAM is more of a campaign system, but in a way that is roleplaying as well. I didn't mean to criticize your article, I was just writing to say "oh cool, somebody else is interested!" I'll work on re-acquiring my ships from my friend's house and finding a camera.
U

The second list of ships had the Starmada stats and the VBAM links if I am not mistaken on one excel sheet.

We have run several Wing Commander games in VBAM. The first was a simple Vega sector campaign using the maps posted here. Our Campaign Moderator assigned system values for the critical worlds. The second was based in the time after End Run with the Confederation on a small offensive through a fictional system. The nice part about this site is that all the maps you could ever need are already assembled. The Wing Commander universe transfers so well to tabletap gaming, whether you play the strategic or tactical side.

how many miniatures have you made from the wing commander ships.

and how much are you charging for them? "D
C

I've made eight durangos, five concordias, two rangers, one confederation, one bengal, two exeters, and one waterloo. Unfortunately I can't mass produce any of them - I make them out of balsa and bass wood. The confederation class alone took a week to build. I just started with top and side views and built the ships layer by layer. Materials costs are on the order of $0.50-$1.00 each, if you want to have a go at building some. I'd be happy to answer any questions on construction.

oh wow.. from the pictures I was under the impression that it was molded plastic!

You, my friend, do amazing work!
C

Thanks! I promise you though, it's not as hard as it sounds. Print out the ship silhouettes from the WC manuals at a scale of 1cm=100m. Then cut basswood in thin layers to match the shape of the ship. It's a good thing they're fairly boxy, that makes the work easier. I recommend starting with 3/32 balsa or bass, which is about the same thickness as most of the layers on the ships in 1:10000 scale. Balsa is easier to cut and sand to shape but bass holds paint better.

neat... I may have to try that