Ultima Codex has conducted an interview with Bill Armintrout, a former Origin vet who worked on Ultima VII Part 2, Pacific Strike and Bioforge among other games. The conversation starts with a discussion about Bill's role in designing Serpent Isle, but it also goes into some great Origin history. There's also a couple cool Wing Commander anecdotes that sneak their way in, as is common when talking to any ex-Originite. That's a great use of the phrase 'Wing Commander emergency'! Check out the full interview here.


UC: Any good (or bad) memories to share about these times ?

BA: When I arrived, the company was in the middle of producing Ultima VII and Wing Commander II, and the place was a hive of activity. There was even a ?bedroom? with bunk beds for those who had worked all night and weren?t safe to drive home! I came to work one day and found the cables of my computer were missing ? recruited for a Wing Commander emergency!

UC: How did you end up directing Serpent Isle in the end?

BA: In what I like to think of as The Night the Directors Left, three of the directors (project leads) at Origin quit all at once. One of them was Jeff George, who had been instrumental in the early Wing Commanders, and then had worked on Ultima sequels. Since I was lead designer on the project, this left me as the de facto project lead.

Origin never gave me the ?director? title. The team thought this was rather silly, and so gave me their own title: The Cantaloupe. So we all knew there was no director on Serpent Isle, only a cantaloupe.

UC: Can you believe it?s been two decades since Serpent Isle came out?

BA: When I go on Facebook and see the faces of those I worked with on Serpent Isle ? boy, they?ve gotten older!

UC: Claw Isle?the big, cat-themed island in the middle of Serpent Isle?s world. We?ve gained some idea of its intended purpose(s) over the years, but can you shed any further light on its purpose? Or, for that matter, why cats were chosen as the predominant feature?

BA: It was an in-joke involving Wing Commander. (There had been something similar, but smaller in scope, in Ultima VII.) Claw was also cut in the effort to rein in the schedule.
Click to expand...

After reading this, I did some searching and Andy posted this about Serpent Isle cut plots on the Exult forum on 09-14-02

There are two conflicting accounts, which may reflect how the story evolved into the one in the Silver Seed. One source stated, “There was supposed to be a Kilrathi (from Wing Commander) stranded there (Claw Isle). Since he was so advanced he was considered a god to any primitive people there. I'm not sure if there was any technology or advanced weapons to be found there.”

Another source stated, “The cat statues represented an almost extinct tribe of cat-like beings, and I believe the chief, Yearl, was in the game.” (Yearl’s art was used as the cat-creature in the Silver Seed.) “He was going to be an ally of the Avatar for a brief time, and he was supposed to be a tragic character who saw that the end of his people was near. We had no plan for the Avatar to be able to save his people, we wanted to darken the mood a bit and add some dramatic conversations with the last survivor about the dying race
Click to expand...

Similar information can be found at http://ultima.wikia.com/wiki/Cut_Material_in_Serpent_Isle which has this picture of a statute on Claw Isle 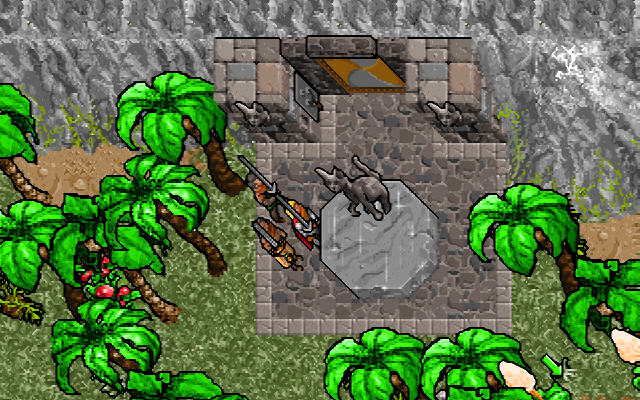