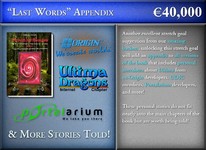 After a stellar launch, the Kickstarter campaign for the Through the Moongate sequel has been fully funded and is well on its way towards a set of new stretch goals. First things first, we're (at the €50 and up level) getting a Wing Commander bookmark by Denis Loubet! The new secondary goals are exciting, but not necessarily as directly tied to Wing Commander. For people interested in the full story of Origin, they're still cool additions, however, and some Wing Commander anecdotes may certainly find their way into the new appendix. The project is nearing €35,000 now, and for various milestones along the way to €45,000, there will be new additions in the form of a 'forward' and 'last words' add-on, additional photographs will be available in certain versions, a development patch will be created and there could even be a new edit of the original volume made.

Let me just say...wow! 100% funded in only one day and six minutes and our first stretch goal not long after! This is way ahead of where we were this time last year. This is incredible! Thank you so much.
Click to expand...