One of the most fantastic websites on the entire Internet, Pix's Origin Adventures, has posted a nice high res scan of the game manual for the Super Famicom version of Wing Commander 1. This edition is more than simply Claw Marks translated into Japanese however, and the booklet gets tons of bonus art alongside reformatted text. Some drawings are brand new, and others are colorizations of art used in the English documentation. We've seen the front and back covers recently, but check out the whole thing here (27 meg PDF). 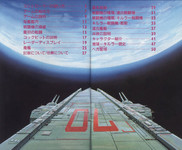 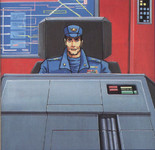 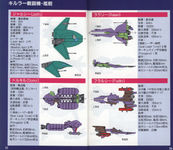 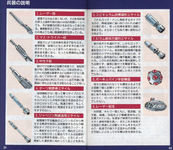 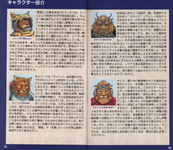 That's awsome. Thanks for the find, and to Pix for the upload.
Anyone know how hard it is to find a copy of the game with that manual in the western hemisphere?
D

This is just outstanding!

I'd like to be the first to ask -- what is that strange 'weapon' on the missile stats page? It's underneath the porcupine mine, listed as # 9.

Anyone know how hard it is to find a copy of the game with that manual in the western hemisphere?
Click to expand...


Surprisingly not impossible. They show up on US eBay on occasion for reasonable prices. If you want one NOW and are willing to pay more, you can use a deputy service to buy a copy from the Japanese Yahoo auctions site. Let me know if you're interested in that process and I can provide more detail (that's how I got most of my weird Japanese Wing Commander ports.)

I'd like to be the first to ask -- what is that strange 'weapon' on the missile stats page? It's underneath the porcupine mine, listed as # 9.
Click to expand...

Red Baron said:
That's awsome. Thanks for the find, and to Pix for the upload.
Anyone know how hard it is to find a copy of the game with that manual in the western hemisphere?
Click to expand...

You're welcome. I've got a spare copy if you want to make an offer. It's got some shelf ware and doesn't have the plastic cartridge holder but it's not in too bad shape. I've got my eye on the FM-Towns version so the money would come in handy.

This is great - neat to see how numerous small tweaks and changes lead up to a finished product that can look so different. Love it!

Bandit LOAF said:
Let me know if you're interested in that process and I can provide more detail
Click to expand...

Pix said:
I've got a spare copy if you want to make an offer.
Click to expand...

Thank you both very much for the offers, but i actually DID find one on Ebay for 16$, and with manual too. Couldn't resist for a second, though i know our customs will probably make a major effort out of it where i live.
Is it a strange hobby to read old game manuals before going to sleep?

That's great news! Not at all unusual to read old manuals before bed; in fact, there's a whole stack of different versions of Claw Marks on my night table (... and probably a few copies under pillows.)

For anyone interested in tracking down the Japanese Wing Commander rarities, the Japanese script for WC is "ウイングコマンダー" The big Japanese auction site is actually Yahoo, and if you run that through auctions.yahoo.co.jp you'll often find some treasures! Unfortunately Wing Commander didn't have the same popularity as Ultima in Japan, but there are some very cool items out there... and a few unique ports (I have a phone card with that Super Famicom art on it, of all things!)

There are a whole host of services designed for buying things from Japan and shipping them to the US. I used one called Celga years ago (www.celga.com) and it was great. You pay through the nose: a percent of the auction, for shipping to their warehouse and then to you in the US, for the bank transfer and so on... but if you want Wing Commander on the FM Towns, that's the only game in town! I wish there were a similar service for Germany.

I'm actually looking at deputy services again because I'd like to get the two Japan-specific computers for Wing Commander games. I'm in the early stages of research there and I'm sure it will be EXPENSIVE... but maybe in a few months.

There are actually three of these on US eBay right now, ranging from $14 to $25. Certainly worth it!

I do have at least one of these, so it's possible.

I'm thinking about putting some money into a deputy service again... I'd kind of like to buy either an FM Towns or a PC9821 computer. I need to do a LOT more research. The computers themselves cost nothing, but the shipping may be impossible. Failing that... who wants to take a CIC trip to Japan with me?! (Actually, that would be pretty fun...)

Pix put up two more ultra-cool manual scans yesterday: the English and Japanese Sega CD Wing Commander manuals. Neither is /as cool/ as the FM Towns one, but they're both pretty neat. The English one adds some material to the classic Claw Marks... and the Japanese one is again in beautiful full color!
You must log in or register to reply here.
Share:
Twitter Reddit Pinterest Tumblr WhatsApp Email Share Link
Top