Here's a better look at the really cool Japanese brochure that accompanied the launch of the Wing Commander Movie in theaters there. Wingnuts got a preview in this week's episode of All Wings Considered now that LOAF has added one to his collection. Even if you can't read the text, it's easy to appreciate what a gorgeous collectible this is. It'd be great if these types of things were more common! 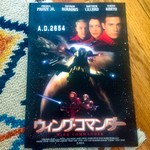 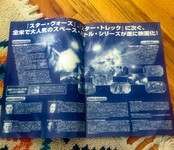 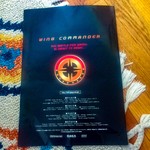 In Japan, theatrical movie releases have printed programs (sort of like a non-interactive @themoviebill.) After some hunting, I’ve found the one for Wing Commander!
Click to expand...

Interesting! It's funny that quite a few of the foreign releases of the movie have had pictures of the Pilgrim traitor right on the DVD covers for years. This program though has that, but also another shot deleted from the finished movie! you can see the Pilgrim traitor on the bottom left of the grid of 9 photos. However top right of the suited soldier holding a handgun is also not seen in the finished movie. That's a shot of Gerald looking for Blair on the ConCom shortly before they have a knife fight. I don't think I've seen that shot outside of the rough footage before. The giveaway here is that he's holding a handgun/sidearm and not the larger rifle/grenade launcher Blair is carrying during those sequences.
You must log in or register to reply here.
Share:
Twitter Reddit Pinterest Tumblr WhatsApp Email Link
Top