If you’re like me, then this time of the year involves daily trips to all the various local stores that carry toys. Each day for the last few weeks I’ve seen plenty of empty Christmas shelves and lots of Nerf guns. But today I saw the first 2005 model Super Soakers!

This year’s line is called Soaker Tag Elite. Their boxes are mostly a distinct yellow and red, compared to the yellow and purple of 2004. This year marks the return of the Constant Pressure System technology, which is featured on all medium and large blasters. It’s worth noting that virtually all of the 2004 Soaker Tag soakers and numerous MaxD guns from previous years have been rereleased. All have been recolored and reissued in 2005 packaging with the new self-sticking Soaker Tags. This year also marks the return of a formidable backpack soaker, which I’ll review at a later time. 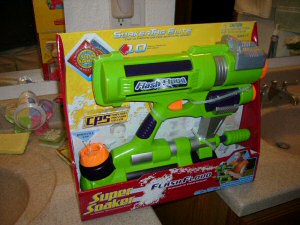 The CPS Flash Flood was my first purchase this year. It’s black and green, with an underslung reservoir similar to the design of the MaxD Secret Strike. Despite its large size, the soaker is well balanced for one hand and easy to fill. The pump handle is relatively small, but gets the job done. The main handle and trigger guard is a good size with a soft firm grip. Because of the CPS tech built into the Soaker Tag Elite guns, each blaster’s stream is much stronger and thicker than the recent MaxD or Soaker Tag models that have been produced over the last several years. Guns at the $19.99 price point in previous years have been pegged to the XP110/XP310/MaxD6000 medium to heavy rifle category, but because of the integrated CPS technology, the Flash Flood seems to clearly outperform those blasters. I’d compare it most closely to the SC600, though the stream has more of a kick and the blaster’s special feature is amazing. 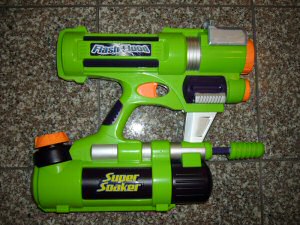 The main reservoir is 40 ounces and feeds a large pressure balloon for a blaster this size. The most exciting feature is a special flash flood trigger located on the top of the gun. In a pinch, it can immediately unload the entire pressure tank in one huge blast of water. In many ways this soaker is similar to the Secret Strike mentioned above, but it is much more powerful. The main CPS stream has a noticeable kick behind it, and the emergency burst is much more powerful than any of the riot blast tricks possible with the original XP line. A couple years ago I was involved in a discussion about dream Super Soakers I wish would be made. This is exactly one of the Soakers I described. The main stream is powerful, and pulling the Flash Flood Trigger is like throwing a bucket of water on someone. All of this in such a portable package is excellent. I’ll definitely be using the Soaker Tag Elite Flash Flood this year. 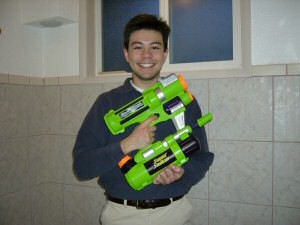 I’ve included a picture of some of the other Soaker Tag Elite blasters pictured on the back of the box. 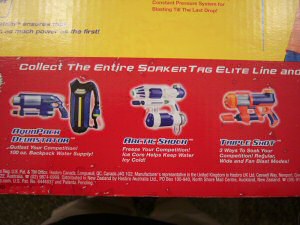 You can find pictures of my Super Soaker collection at https://www.wcnews.com/chrisreid/supersoakers.html
Last edited by a moderator: May 24, 2018

It's somehow reassuring that this world isn't yet crazy enough to cancel the super soaker line for this year because it might be politically incorrect in accordance to recent events in Asia. (Although "Flash Flood" might be a little too close to home, even for me)

On another note - I recently found out that the water pistol I picked up for 2.99 at the local (German) grocery store to help me get the wallpapers down in my house (12 ft ceiling!) is actually a Super Soaker. [Wanders into basement, gets back] It's a screaming yellow Extra Power XP, if that tells you something...
A

I think I remember those little guys...I think I got hit with one once.

Heavy pistol sized, great range (like you described, 12 vertical feet is huge for a pistol)...sounds pretty wicked to me.

I LOVE that Flash Flood...I haven't had a good Super Soaker fight since wasting my brother with my old XP105, but that looks like a good replacement for my trusty gun if I ever end up back in it.

criticalmass said:
On another note - I recently found out that the water pistol I picked up for 2.99 at the local (German) grocery store to help me get the wallpapers down in my house (12 ft ceiling!) is actually a Super Soaker. [Wanders into basement, gets back] It's a screaming yellow Extra Power XP, if that tells you something...
Click to expand...

Hmm.. I'd love to know what kind it is. If you ever got a picture, you should post it.

Man, it's been a long time since I had or used a water gun. I remember one year the girls and guys here all antied (sp?) up for some super soakers and unleashed an unholy war of water. Each player was equipped with soakers and water balloons...what an evening. I did pretty well up until the end when one of my teammates got mixed up and thorughly drenched me. Its been so long I can't remember what the soakers were but pretty much everyone had a big heavy one, mine was like a 3 tank double barrelled monster. My friend has two of the dual barrelled twin tank soakers and had one in each arm just wading into the hydra combat.

I have one that I bought about 8 years ago. I was living in an apartment complex across a breezeway from a couple that had two poodles. The owners would leave the sliding door to their screened porch open when they went to work at 7:00am, and those dogs would run outside to the porch, jump up on a bench, and bark NON-STOP until about noon. I was working a 3-11 shift at the time. I would get home around 2am, and I didn't appreciate all of the yapping, having had only about 5-6 hours of sleep. Speaking to the dog's owners did little, but after 4 or 5 soakings with that gun my problem was mostly solved.

The gun is cool. It holds a total of about 3-4 quarts of water in two chambers. 10-12 pumps of the handle will give you a range of about 25 feet for several seconds, more than enough to soak a couple of barking dogs. I'll probably keep it forever.

ChrisReid said:
Hmm.. I'd love to know what kind it is. If you ever got a picture, you should post it.
Click to expand...

I must have a really boring life... So I actually went over to iSoaker and spent some time identifying it: it's an XP70, see - http://www.isoaker.com/SoakerNetwork/Gallery/ProductGallery/Air/pages/Xp70_jpg.htm

Concerning funny stories: I nearly used it once apart from remodeling work - our cat got beaten up several times by a stray red tomcat with a little bell around his neck. So one evening I'm out in the garden, and I hear a faint jingle-jangle coming from the street. So I thought "This time he'll pay", got the gun and crept up to the corner of the house next to the street.
The jingle came nearer, and I poised the gun to the spot where the cat was sure to turn up, no 3 ft away. Something entered my line of vision - reddish, wearing a bell.. wearing a leash... too long ears.... - and I just had time to stop myself from pulling the trigger as an elderly gent and his little dog went past. They never saw me; I felt mortified, and as I turned around, our cat was standing behind me, with that typical what-silliness-do-you-have-in-mind look.

But that really exhausts my SuperSoaker experience for now.

Does anyone remember the Super Soaker 50 Keyrings?
B

As they say "Wetter is Better"

TopGun said:
Does anyone remember the Super Soaker 50 Keyrings?
Click to expand...

I like that Family Guy when that nudist kid is at the mall walking around with his super soaker. And that old guy is like, "Holy moly, it must be my birthday."

criticalmass said:
I just had time to stop myself from pulling the trigger as an elderly gent and his little dog went past. They never saw me; I felt mortified, and as I turned around, our cat was standing behind me, with that typical what-silliness-do-you-have-in-mind look.
Click to expand...

I would have let em have it anyway.

I think we've got one about somewhere, I'll try a get a picture


Shipgate said:
I like that Family Guy when that nudist kid is at the mall walking around with his super soaker. And that old guy is like, "Holy moly, it must be my birthday."
Click to expand...

Chris, are you planing some sort of Private Army, with the amount of Super Soakers you've got

I've got a bunch of super soakers from way back when. Four 100's and two 200's. That was back when they broke easily, which is why I have so many. Only half of them work, and are replacements for the other half

Perhaps those early models' flimsiness is the reason for my concern with the Flash Flood:

The Flash Flood looks interesting, sounds a solid performer too. I wonder about the placement of the pump though: it is not inline with the handle. When pushing hard to get that last bit of pressure, it seems like it would be trying to twist the gun out of your hand,and maybe bending the rod a little bit. See attached picture.

Well Chris seems happy with it

Even soakers with the pump in line with the handle are subject to random pressures that may cause that breakage. They build them sturdy with that in mind, and you have to take a certain bit of care with all of them.

TopGun said:
Chris, are you planing some sort of Private Army, with the amount of Super Soakers you've got