This is a review of the Super Soaker HydroBlade. It’s a medium size blaster with a unique alternate fire mode. 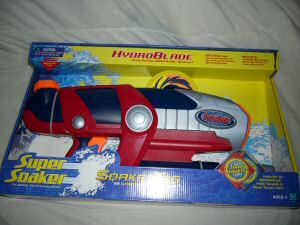 The gun comes packaged with several free Soaker Tag targets for strategic games and comes with the standard quick fill cap. The size is fairly good for a medium air pressure gun. It’s a little bit smaller than this year’s Triple Aggressor and therefore somewhat more mobile. Primary coloring is red, blue and silver, which produces a nice effect in combination. It might have the best new color scheme of the year. The handle is textured well and the undercarriage grips provide great handling, although the pump is not sturdy. This is the most notable problem. Some caution must be used when pumping on the go. Although the mechanism is similar to that used in the Triple Aggressor, perhaps the overall smaller size makes this more pronounced. The HydroBlade received its name from a yellow disc which rests in the middle of the blaster. This can be quickly deployed to produce a short-range spray effect. 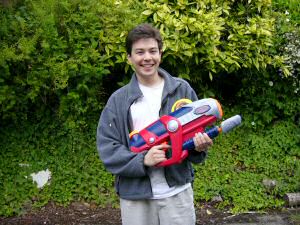 Overall the blaster is designed to be on par with an XP270 or MaxD 5000. It’s slightly larger and more capable than its siblings in that role. The HydroBlade is a long-range blaster in standard mode, and the actual hydro blade is an interesting addition. Merely adding a separate nozzle could produce a similar effect, but the hydro blade fire seems to move a bit more quickly away from the gun. This extends the range beyond what regular fan nozzles have produced in the past. It’s a cool effect, which some will think is unnecessary. Since its counterpart blasters in the past have lacked secondary nozzles of any kind, I’ll consider it a welcome addition. The deployment button is easy to access and utilize when opponents get close, and the gun’s regular stand off range should make that mostly unnecessary. 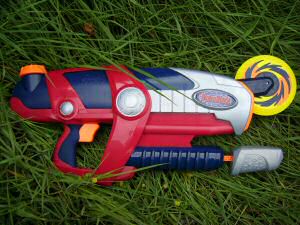 The HydroBlade is a solid blaster that complements the Super Soaker lineup nicely. In certain situations a larger Triple Aggressor or CPS 2100 may be more desirable, but the HydroBlade makes a great medium sidearm.