We recently saw the earliest known build of Wing Commander III which showed the gameplay circa May, 1994. Today we have a glimpse of what Heart of the Tiger looked like two months later, on July 9, 1994. Stay tuned to watch the game take shape! 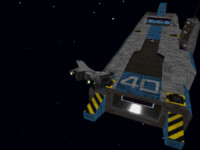 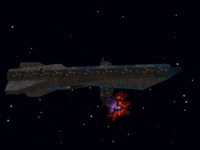 I seem to remember reading an explanation, but why is it that they made the space background color blue? In Wc1/2 it was not as noticeable, but it was really noticeable in Wc3 and then suddenly black in Wc4 and Prophecy.

I like it. I think it fits with everything being generally pretty colorful and visible in the Wing Commander universe.
L

There is no way to fix wc3 to have space that black, is there?

There are three levels of color, from more blue to more black, that you can select during install depending on what you prefer. I think Control+Left/Right Arrow Key adjust them in space.
D

No, these screenshots are from a May, 1994 build of the PC game--that was well before the 3DO version was even a glint in anyone's eyes.

LarkInFlight said:
There is no way to fix wc3 to have space that black, is there?
Click to expand...

I think ddhack has a bug/feature (whichever way you want to look at it) where space is left as black instead of the original navy blue.
L

I think ddhack has a bug/feature (whichever way you want to look at it) where space is left as black instead of the original navy blue.
Click to expand...

Wedge, could you describle how to do it, please? Step by step if possible (I'm not very good at applications like ddhack). I think I'm not the only one who likes 'darker space'

The community could benefit from it.. Imagine. 'How to make wing 3 more like wing 4

Control+Left/Right Arrow Key adjust them in space
Click to expand...

It's still too blue for me. I do this plus I adjust my monitor to make it more black, but if Wedge shows me how to fix it another way, my problem

I think I even started a thread about space more black in wing3 few years ago, but with no effect.

I didn't 'do' anything, I just saw what was in sol's development thread.

For some reason, because of III I always associate space in Wing Commander with being dark blue, despite the fact that I haven't spent that much time playing it compared to the other games.