I was thinking that it would be nice to see something like an A-10 something for close ground suport or at least something that looks like it. I think that it could look cool if it was a medium/heavy fighter I just think it looks powerful when it's fully loaded. Also I like the F-16/Piranha but I think if you shortened the tail fins it would look better because the fins are for atmo flight and not space flight and with four short one it would equal two normal ones but they still look really cool.

That looks like a upgrade the kind i like more guns easy to kill my target. one thing I don't know if this has been asked but are these for a game or just for fun or rather great fun because they do look great.

Normally Scooby's models are ready for use in the FS2 engine (maybe with just a few table edits to fit into the mod but no changes on the model file) when he releases them, and if they fit there I guess you could use them in other engines as well.

The model's tables need lots of tweaking (speed, shields, armour...etc) I've setup weapons and missile slots so they should be ok. 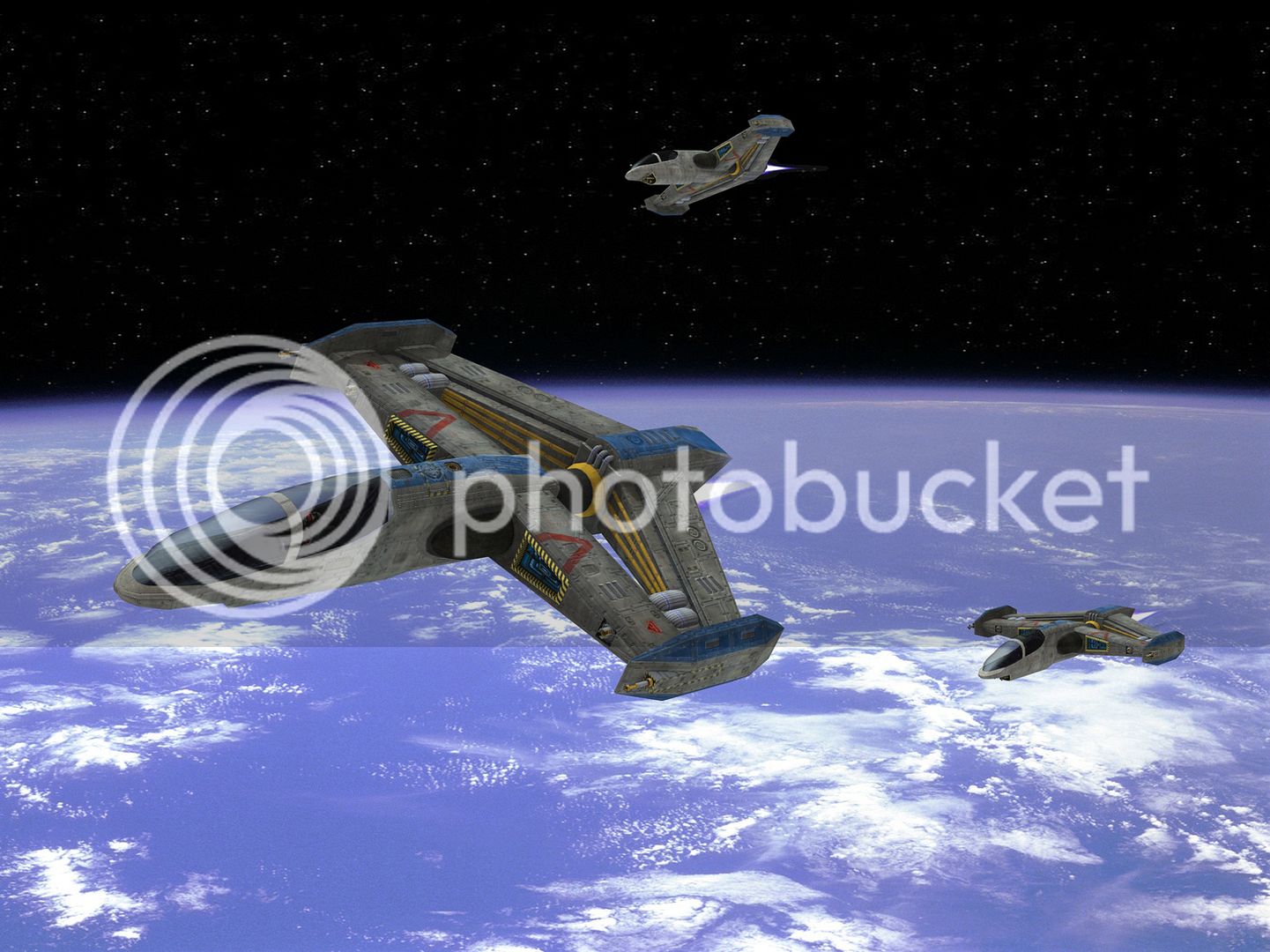 Yeah, of course everything has to be balanced and so on. But the most important things (subsystems in the model, weapon points, thruster points and so on are already there, so the person creating the mod doesn't have to touch the POF file.

And that's a good thing. Editing tables is easy, editing POFs is not so easy. I was really happy your Clydesdale worked "out of the box" because I wasn't able to edit all that stuff back then.
M

I was really asking if it was more like an add-on or something were I can just install it to a game not work on it. I'm not able to do any of that stuff I tried but couldn't do it. And I'd just like to say that I would like to fly that Piranha it would suit my still of fighting with the extra guns on it. I'm going out on a lim and just gonna say that if you upgraded the power core its shileds will be the same and the extra power would go to the weapons and engins and the armor is reduesed but 15 to 20 all around to me that sounds like a nices start for it.

Hmm... I could do a small tutorial on that...
But it is indeed fairly easy. You just have to create an empty mod folder and put stuff into it.
As for editing the tables: In most cases you can copy values from another entry, from the Arrow for example. And then just play with the values until they feel good.
The engine is very versatile. All of the following can be done via simple table edits:
- You want to turn in 0.2 seconds? You can do that!
- You want 50m long engine flames? YES, YOU CAN!
- You want four plasma guns on your Arrow? HELL YES!
- You want a Longbow that goes 3000kps and has nuke mines on board? F**K YEAH!
- You want to make a gun that poops wingmen instead of shooting? HELL Y... ahem... no, actually. But it can be done by a bit of scripting.

Also: That could be an awesome idea for a new Nephilim ship: A fat ship that flies around and if it gets into a fight it has some "babies" aboard that are pooped out. Like that Ray cluster but with the small ones inside instead of swarming around it.
...also I think I just got an idea how I could make that Ray cluster work in the FS2 engine, just with a little bit of scripting:
The Remoras are modelled to the Ray model as strangely rotating turrets (the turret base being invisible and the "barrel" being the remora. I think I can figure out the numbers for that...) and when it dies I trigger the "create-ship" symbolic expression to spawn the Remoras via LUA scripting.... I have to try that. Quick, someone give me a Ray and Remora as (turreted or unturreted) FS2 ships!!

Soo many ideas and so little time....

Aginor said:
Hmm... I could do a small tutorial on that...
- You want to make a gun that poops wingmen instead of shooting? HELL Y... ahem... no, actually. But it can be done by a bit of scripting.
Click to expand...

Funny thing, way back before I was working with saga I was playing some custom mission and my fighter started launching crossbow bombers instead of missiles!!

Ah, ok. But it was only the models then. With scripting you can actually create real wingmen with AI and everything.
Still it must have looked hilarious

Bandit LOAF said:
Alright, then, I'd like a 22 kilometer long dreadnought.

You would need a completely new texture and much more turrets it would have a huge number of blind spots) to make it look halfway good, and not like a blurry mass when flying closer than 1000m or so. (Also keep in mind that the beauty of Scooby's textures is that they actually are scaled to each other, that gives you all the sense of scale in the first place.)
Just scaling it up won't do the job (it would be rather easy though). Also you would have to adjust the turn rates and stuff, otherwise its bow and stern would move with ridiculous speed when turning.
So yeah, it would be easily possible, it just wouldn't fit to anything in the engine and it certainly won't reach the high graphical standards WCS set.
Maybe I'll do it one day just to show you how bad it really looks, but not anytime soon I guess.

Also I still think that its size - regardless of it being canonical - is just plain ridiculous and one of the (if not the single) worst design decisions in the history of WC.

Yes I remember mentioning the number of turrets needed to guard a 22km monster. The canon values (even with point defenses) would leave the dreadnaught extremely poorly defended (something like 1 turret per km

The engine itself can handle 22km no problem, I've got a frankenship that's over 100km and it works (albiet pretty useless)

Do you know whether there is a turret maximum in the engine, and if yes: How high is it?
Then maybe one could use the canonical turrets just as the bigger ones, and mount some dozens smaller ones everywhere.
The turret density should be around a quarter of that of a cruiser to be a bit effective. Everything else would make the turrets useless because turrets are no real danger when only one can fire at you at a time. If I didn't do the math wrong (I haven't had my coffee yet) one would need at least 80-100 turrets. There will still be huge parts that are undefended, but for that you can use fighters.
So my first armament idea for the 22 km KDN is the following:
100 laser turrets, 12 tachyon turrets and 16 heavy antimatter guns (4 forward firing ones and 6 on each side)
That is 128 turrets in total. Which is the absolute minimum I think. You could maybe do a trick and invent new turreted lasers and tachyon guns that have double the range of normal ones.
For comparison: If you use the same turret density like on a cruiser you get a number around 650 turrets.

Mind this is only a thought experiment.
M

I'd like to see a fleet pic if you can something with all yours ships in formation or something like that?

That would be a pretty large picture.

I was not asking for all his ships in one pic just a fleet pic like in WC3 were is was two destroyers, two cruisers and the carrier but with some fighters covering the fleet something like that. I was thinking something small but still shows of the power of his ships when there togethter. There some pics like the one for Prophecy were they show the front of Midway with at least two of every fighter and then theres to one for Stand-off were they show your carrier joining the fleet, I was thinking of something along those lines.

Then maybe one could use the canonical turrets just as the bigger ones, and mount some dozens smaller ones everywhere.
Click to expand...


That IS how the canonical ones work, err, canonically.

The 38 turrets are the large bore weapons and then the ship has dozens/hundreds of point defense guns, too...

Actually, it's the CIC Ship's Database that says fifteen; WCPedia doesn't say anything about its armament.