Way back in 1998, I was invited to take a tour of Origin Systems. I was a senior in High School, and was visiting Austin to tour the University of Texas… of course, what I really cared about was Wing Commander (and that hasn’t changed much!) Our WCNews.com PR contact, Mike “Boomer” McCoy, arranged for me to get a tour and to have lunch with the team. This was shortly after Wing Commander Prophecy Gold had shipped and the team was working on design concepts (little did I know, days before my visit their proposal for a co-op multiplayer game called Wing Commander Strike Team had been cancelled mere days before my visit.)

I won’t bore anyone with details of that tour (I’ve probably told that story enough times!) but I will mention that part of the tour involved a walk down to Origin’s basement. Stored downstairs were a number of arcade machines and a pile of seemingly random Origin props (a ruined Thrakhath head, some Crusader bits and bobs, old flight suits and the like.) The largest of these was what seemed to be the wall of a spaceship or a space station: a big wooden section with a window in the center.

At the time, I assumed it was a set piece from one of the Crusader games. It made logical sense to me: those were shot in Austin rather than Los Angeles, so it was far more likely that a wall segment had survived. And besides, it didn’t really look like anything I remember from Wing Commander!

Two years passed. In 2000, my (then new) friend Joe Garrity had his own tour of Origin… where he snapped his photo next to the same wall segment. After his visit, he sent me the picture with the question: what is this from? His tour guide had told him it was from Wing Commander, though he’d also assumed it was a Crusader prop. He had watched through all the Crusader videos (I’m sorry) and hadn’t come across anything like it. Was it a WC prop, or something totally unrelated?

I put my thinking cap on and ran through Wing Commander IV in my head. It felt like a Wing prop, but the windows and the exposed superstructure didn’t match anything in the game I could recall. And then in a flash of what I will maintain is brilliance, I figured it out: it wasn’t a WALL at all… it was the inside top of a Lance (Dragon) fighter! It was from the scene where Pliers reaches up into the ship and discovers the flashpack. What was hanging on the wall at Origin was actually the bottom of a spaceship, looking down! I was suddenly jealous I didn’t get a picture with it… although Joe thought I was a genius for realizing what it was!


Origin closed in 2004, and I think we all assumed it was thrown out along with anything else they didn’t want to ship to California (after all, what use could anyone have for a giant wooden spaceship hull slat?)

Flash forward another decade. I get a notification on my phone that there’s a new post to the exOrigin Facebook group (sorry, invite only.) There it is: a photo of the same set piece! It turns out a former employee had rescued it from being thrown out and had been using it to hold an entertainment center in the ensuing years. Now, he said, it had to go. Anyone who could haul it away was welcome too it.

I immediately replied that if he couldn’t find a home for it in Austin, I’d gladly have it shipped somewhere. That was beyond my financial means (it’s a really big prop!) but I figured I could work it out somehow. Maybe Chris would want it for the office! A conversation on the exOrigin user group ensued and several solutions were offered… including one person who said they wanted it for their charity haunted house. I figured I wouldn’t stand in the way of it going to charity, so didn’t follow up.

A week or so went by and I awoke to another update: it had not been claimed and was going to be thrown away at 5 PM today if it couldn’t find a new home! I knew I had to save it, but I had no idea how. I no longer lived in Austin and couldn’t just go and get it. Luckily, I knew a Star Citizen backer with a truck in town. After a crazed morning of trying to contact him while in the weekly Star Citizen Leads meeting (at one point missing a question about ship specs the UK guys were asking me!) I arranged to have him pick it up. An hour later, it was in the back of his truck (where it barely fit.)

He took it out to the CIG office in Bee Cave, where half the team stopped what they were doing and helped carry it up the stairs. It now sits in reception: https://pbs.twimg.com/media/B48aywOCEAA6fLK.jpg

Awesome work! It's pretty incredible that such an odd piece of set would survive all these years.

In the words of Doc Emerik, "Save!"

Way to save a piece of history from the landfill! Entertainment center...ha...sad thing is I saw it too.

I'm glad that you guys saved this piece of gaming history.

Find some way to shoehorn it into Star Citizen.

Background & porthole looking out into space on the Bengal perhaps?

This is the best story.

LeHah said:
This is the best story.

long live wing commander and the wc community and its bc of folks likme ben, chris, and the rest of you guys, glad this site is alive and well

That's awesome.
Now where's the rest of the dang thing?

Hah, the rest never existed! The outside was entirely CGI

Wonderful story. As I was reading it, I couldn't see the connection to WC either... till I saw the frame-grab of Pliers and the Flash-Pak. Well done!

Great story, Ben. Thanks for sharing. It's cool to see how many of the ex-Origin folk have stayed in contact over the years. Clearly they had as much fun making games together as we had playing them.

She really needs a plaque or something to explain the significance of the prop. Like Wedge, I didn't recognise it either.

Bandit LOAF said:
Hah, the rest never existed! The outside was entirely CGI

Clearly you lie, i've seen it fly.
But that's ok, i understand that you wouldn't want to show everyone what's inside your garage.

very cool! nice to see some things still surviving from the glory days of FMV.

Red Baron said:
Clearly you lie, i've seen it fly.
But that's ok, i understand that you wouldn't want to show everyone what's inside your garage.
Click to expand...

Theres nothing to show. (It has a cloaking device)

Here's another twitter picture of one of the CIG Austin people appreciating the Dragon hull. Has some nice close up detail! 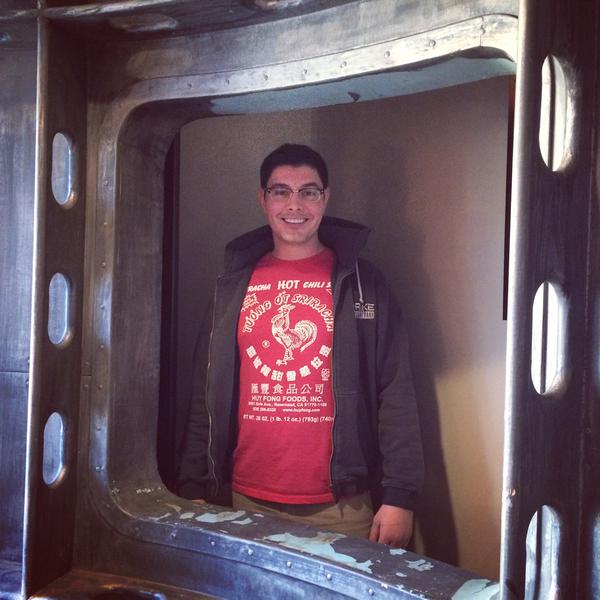 "That belongs in a museum!"