ginger_tigra said:
Thnx! Fonts in globals.iff are, in general, same as in DVD version; but contents of language.tre is much more interesting.
In particular, I have tried to simply put it together with wc4dvd.exe and run it, and I got game nearly fully translated into Spanish (except names of targets, guns and missiles on cockpit displays).
Click to expand...

Yes, the game interface appears almost translated, but I've noticed that the font type of the cockpit anwsers to conversations (i.e. 1:affirmative, 2:negative) is wrong, looking similar to arial or some sort of family windows fonts, and is not the same font type as the DOS version, which looks more "edgy" and squared corners. I'll take a screenshot to explain it better.

ginger_tigra said:
Yes, I already know about this bug. Problem is, that configure dxmci.lnk points to %windir%\system32\rundll32.exe, which in fact is not 32-bit but 64-bit application in 64-bit system, and therefore cannot load and run 32-bit dxmci.dll. So I have made small app that simply do the same in proper way. Unpack this attachment to directory with wc4dvd.exe and dxmci.dll and run it.
Click to expand...

ginger_tigra said:
There may be several reasons so more thorough investigation needed. At present, I'm not ready to reply because I don't have 64-bit Windows; so at first I must try it on my own PC.
Click to expand...

Maybe is something with an incorrect version of dxmci.dll?
I can play it under VM if needed, and I don't want to overwhelm you with complains.
Just pointing the bugs just in case it can be fixed.
Thank you again for this impressive work.

asso said:
the font type of the cockpit anwsers to conversations (i.e. 1:affirmative, 2:negative) is wrong {...}. I'll take a screenshot to explain it better.
Click to expand...

Please make 4 shots:
Also, I would take a look to Spanish wc4.exe and/or wc4w.exe and compare them to English ones.
Also, if other .tre files (except movies1.tre) from Spanish first CD differ from English version, please send them to me too, so I can more thoroughly analyze game logic about accessing .tre files.
From difference between English an Spanish language.tre I already have found that my algorithm of substituting translated IFFs to game is incorrect and needs to be remade nearly from scratch. Fortunately it's a relatively small piece of code and its remake will not take much time.

Hello.
Here are the pictures, but I've noticed that the "strange" font is the same in the GoG version, using the english or the spanish language.tre 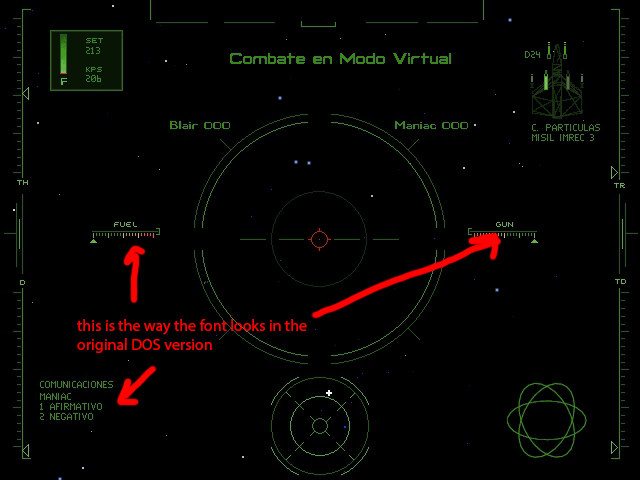 This is the GoG version. Maybe thats the way it should look but, for me is a very large font compared to the rest of the interface. 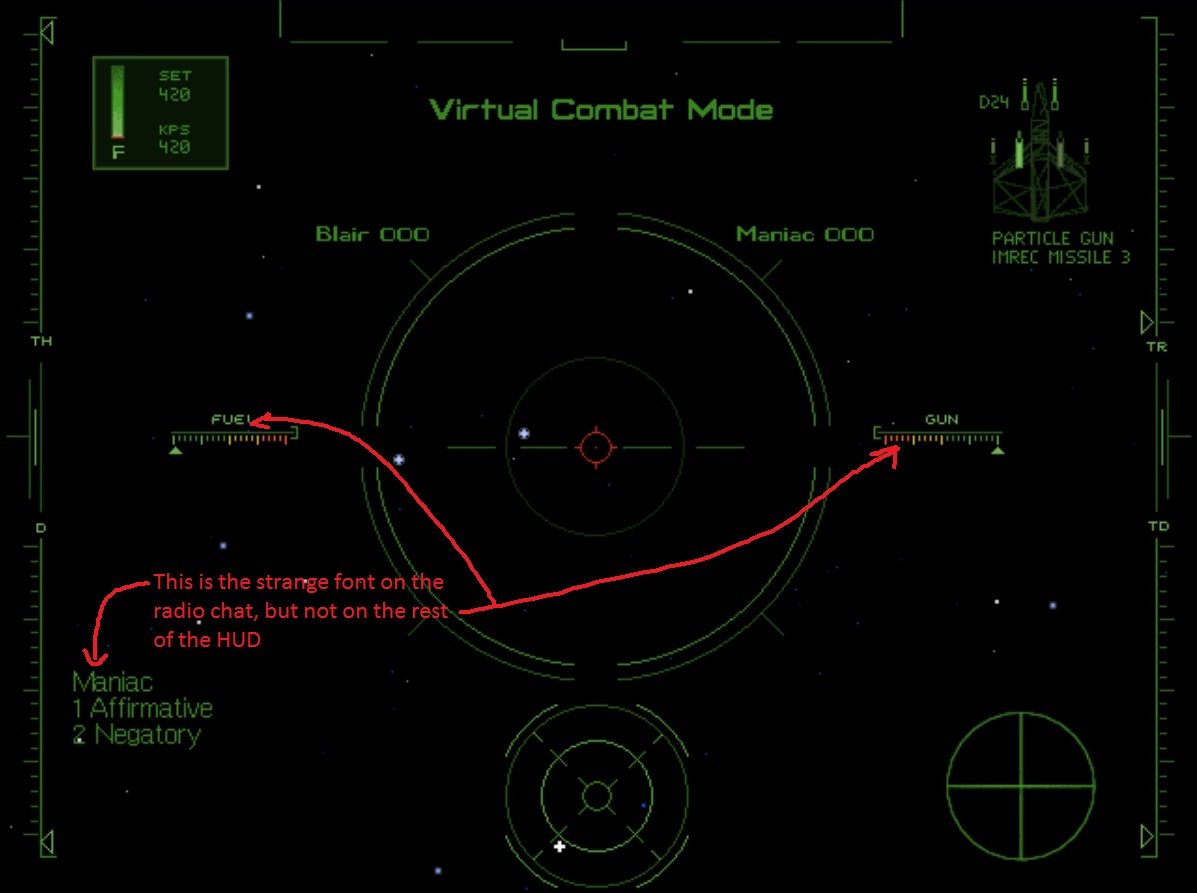 asso said:
I've noticed that the "strange" font is the same in the GoG version, using the english or the spanish language.tre
Click to expand...

Yes, it is. :-( This font is very uncomfortable for me. For my translation, I've redesigned few fonts - comm menu (made it smaller), comm subtitles (small letters added), final credits: 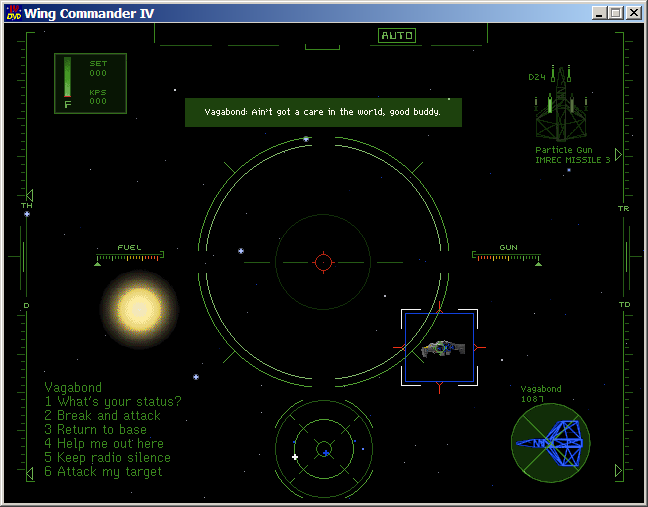 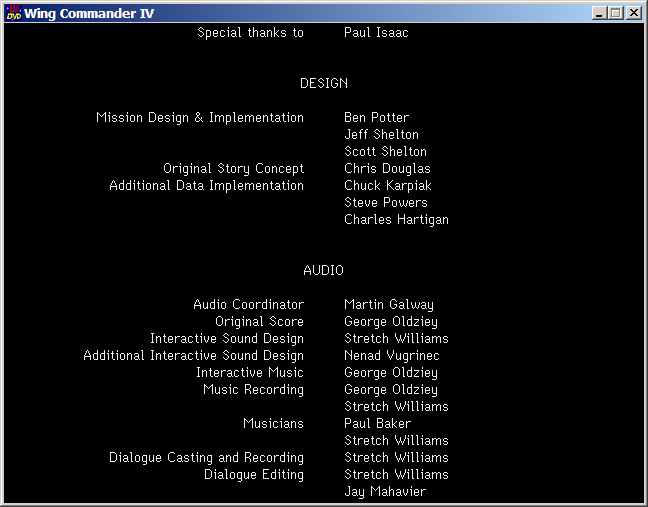 And about short inscriptions in cockpit, like "FUEL", "GUN", "AUTO": as I mentioned earlier I didn't found such fonts at all, and I suspect that they are not text strings but small pictures "glued" into big transparent picture of the cockpit. And I don't know how to find and translate them. :-(
Last edited by a moderator: May 24, 2018
A

с новым годом @ginger_tigra
Happy new year to all fans!
How is it going?
I'm having a lot of work now, but still available if you need some humble help!
A

Hello @ginger_tigra
Is the project dead?
Do you need help?

I do think we can safely say Ginger_Tigra isn't working on the project currently. Looks like they haven't logged in here in almost four years.

That said this is a great bump. For the remake project I’ve been adding support for extra languages.
@EmuMusicFan already translated everything to Chinese for us. An existing Russian translation is definitely something we’d want to incorporate
A

Pedro said:
That said this is a great bump. For the remake project I’ve been adding support for extra languages.
@EmuMusicFan already translated everything to Chinese for us. An existing Russian translation is definitely something we’d want to incorporate
Click to expand...

Sorry for the bump, but I was expecting to translate the DVD version to spanish using the original MS-DOS files.
I've seen the post about the remaster and I'm HYPED!
If I can help you with the spanish translation let me know.
Cheers!
You must log in or register to reply here.
Share:
Twitter Reddit Pinterest Tumblr WhatsApp Email Share Link
Top