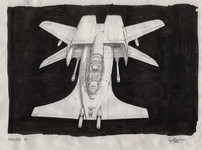 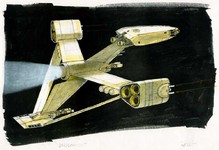 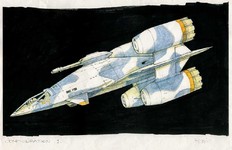 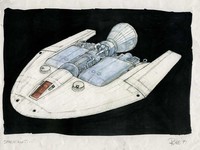 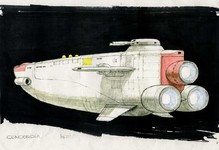 well hello there. It's nice to meet you!

Very nice! Those actually look like Wing Commander ships! However, the big capships don't feel as big as they should (except the Diligent, which actually seems pretty enormous compared to what it ended up being in the film).

The Rapier is really great, because it looks different and unique, while at the same time very clearly being a Rapier - the artist evidently looked to the games for initial inspiration.
L

Anybody else get the Star Wars B-wing feeling from the Dreadnaught ?
C

I'm not too sure about the capships either but the fighters are really awesome and design wise everything is really cool.

I think the Rapier is aces, I would prefer that one to the final film version. The Concordia is interesting, looks like a cross between a B-29 and a submarine. It's hard to get a sense of scale from it, but I would guess its a far smaller ship than the battleship that it ended up being. It kind of reminds me of the art from an old Steve Jackson board game called "Star Fist", it has that retro 50's vibe to it.

Configuration 1 looks a bit like a Gunstar to me, but that's not a bad thing

Anyone know if the Dreadnaught design was intended as a Confed ship? It looks kind of proto-Kilrathi to me: sort of asymmetrical and resembles a dagger.

Quarto said:
Very nice! Those actually look like Wing Commander ships! However, the big capships don't feel as big as they should (except the Diligent, which actually seems pretty enormous compared to what it ended up being in the film).

The Rapier is really great, because it looks different and unique, while at the same time very clearly being a Rapier - the artist evidently looked to the games for initial inspiration.
Click to expand...

I like that the Rapier is definitely based on the game designs, but I can't help but see the S:AaB Hammerhead in it.

As for the movie diligent, it might not have been as big as in this particular concept, but it was in no way a small ship either. Appart from the flight control room we do see both Maniac and blair's cabin, Paladin's cabin, as well as the cargo area that the marine's use during the concom assault. We don't get a great sense of scale when we see the diligent in the film from the outside, though when you think about how big the umbilical looks in the concom raid and that suited up marines need to walk/float through it. I've attached a pic because seeing the diligent on the flight deck of the claw makes it feel really small when I don't think Ron's version is necessarily *that much* bigger. I'd peg the final Diligent form at around 2/3rds the size of Ron Cobb's 'configuration 2.'

Bandit LOAF said:
I believe 'Configuration 1' is another take on the Diligent (which is labeled Configuration 2.)
Click to expand...

I concur. It's a very different direction than the other diligent take...

Speaking of the diligent, Sandi posted a picture of a set of bluprints from the movie used for making sets. It wasn't immediately obvious from her pic what it was but I have taken a screenshot from the film so that everyone can compare. This is of particular interest because it is a blink-and-you-will-miss-it instance in the theatrical cut but would have played a larger role in a version with the traitor subplot intact. Blair was not supposed to board the concomm during the raid to get fuel cells. He was onboard the Diligent, not as a marine, but as her turret gunner...

Interestingly, Gerald's line moments earlier in the film support this too since he says he doesn't want his men "flown into combat by a rogue and a half-breed". Gerald acknowledges that Blair is on board as part of the flight crew, not part of the marine contingent.

I agree that it was probably intended to be Kilrathi, because there are no Confed dreadnoughts in the Movie. (The Concordia we see in the movie is classified as a "Supercruiser."

) Of course they must've had the more familiar WC2 Concordia dreadnought in mind when they reused the name, but that ship was built around the Phase Transit Cannon technology which was derived from the Sivar technology after SM2. And lest anyone think the movie introduced the convoluted notion of multiple Concordias, you can thank WC4's Concordia class fleet carrier for that.

Sandi's blueprints were: the Diligent's turret, the tube it uses to attach to the communications ship and the Tiger Claw bridge. I'll have to figure out how to scan them! (My favorite thing right now is how happy Sandi is to find Wing Commander stuff to show me.)

When looking at art like this, think about it in the context of the film's script at that time... so 'dreadnaught' is the Kilrathi dreadnaught needed for the end of the movie.

That certainly is a different look for a Snakir.

I do like it though, it's a very creative design.

DefianceIndustries said:
That certainly is a different look for a Snakir. 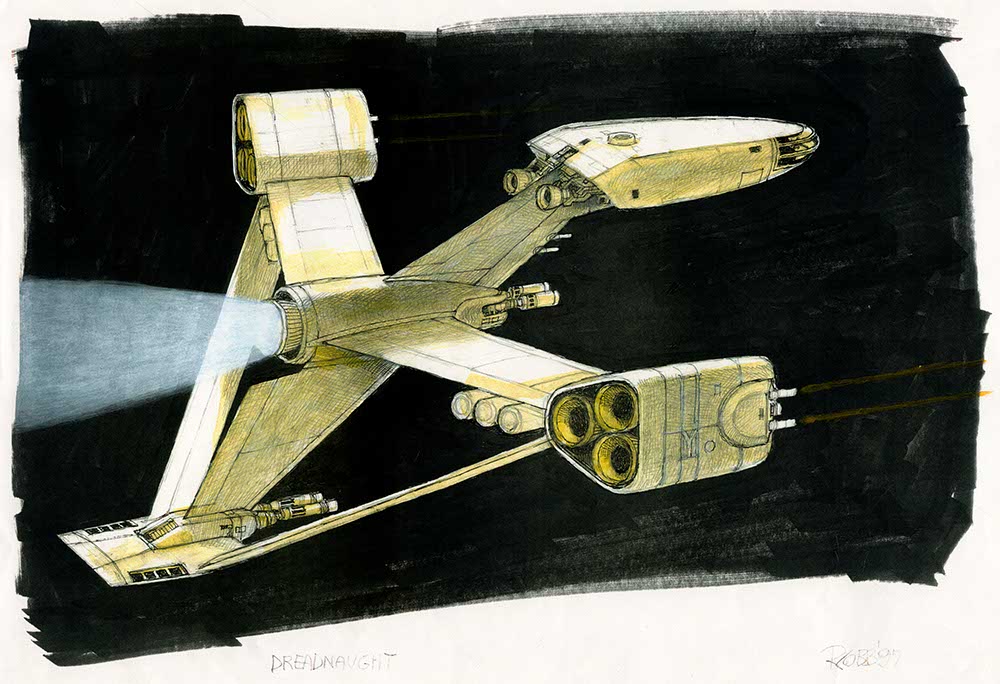 So I got thinking of this a bit more and I found at least one older production photo that has always remained contextless. LOAF's mention of the various plans including blueprints for the docking umbilical got me thinking of the whole sequence... Anyway first up: 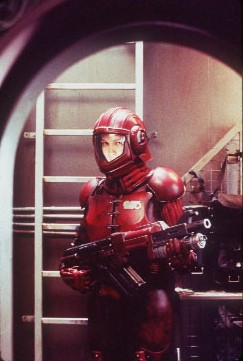 In that photo Angel is standing in front of a ladder that is on the Diligent. This latter is - presumably - the one that accesses the turret. The access hatch in the foreground is the door at the back of the cockpit. In exterior shots, it kinda looks like there's probably an upper crawlspace or walkway to get further back and into the actual turret. In the test audience cut of the film you see Blair decsend this ladder, round a corner into a hallway when he's sneaking out of his post to leave the ship. In a scene shortly after we see in first person the hatch to the umbilical open and the camera moves through the walkway (suggesting we are seeing what Blair is seeing). The script has the interior of the umbilical being zero G but I never saw that actually depicted in any footage.